St. Sophronius the Bishop of Irkutsk 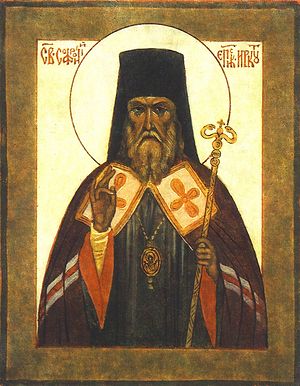 Saint Sophronius, Bishop of Irkutsk and Wonderworker of all Siberia, whose family name was Kristalevsky, was born in Malorussia in the Chernigov region in 1704. His father, Nazarius, was “a common man in his affairs, and the saint was named Stephen, in honor of the protomartyr Saint Stephen. He had two brothers and a sister, Pelagia. The name of one brother was Paul. The name of the other older brother is unknown, but it is said that he was head of the Krasnogorsk Zolotonosh monastery.

Stephen’s childhood years were spent in the settlement of Berezan in the Pereyaslavl district of the Poltava governance, where the family settled after the father was discharged from service. When he came of age, Stephen entered the Kiev Theological Academy, where two other future hierarchs were studying: Joasaph, future Bishop of Belgorod (September 4 and December 10), and Paul, future Metropolitan of Tobolsk (June 10 and November 4).

After completing his religious education, Stephen entered the Krasnogorsk Transfiguration monastery (later renamed the Protection monastery. In 1789, it was transformed into a women’s monastery), where his elder brother already labored in asceticism. On April 23, 1730 he received monastic tonsure with the name of Sophronius, in honor of Saint Sophronius of Jerusalem (March 11).

On the night after his monastic tonsure, Saint Sophronius heard a Voice in the Protection church predicting his future service: “When you become bishop, build a church dedicated to All Saints.”

In 1732, he was summoned to Kiev. There he was ordained hierodeacon, and then hieromonk in the cathedral of Holy Wisdom. After Saint Sophronius had been a monk for two years, he became treasurer of the Zolotonosh monastery for two years, and then His Grace Bishop Arsenius (Berlov) of the Pereyaslavl diocese sent him into the house of his archbishop, where he was steward for eight years.

These facts testify to the connections of the saint with his original Protection monastery. During his obedience under the presiding hierarch at Pereyaslavl, he often visited his monastery, spending the day in quiet contemplation and work, serving as an example to the brethren.

He summoned his fellow countryman, the hieromonk Sinesios (Ivanoff), a native of the city of Priluki, and made him igumen of the Saint Sergius Hermitage, a dependancy of Saint Alexander Nevsky Lavra. From this time the friendship of the two ascetics, hieromonk Sophronius and hieromonk Sinesios, was strengthened by their joint pastoral effort, and they were inseparable until they died in Siberia.

During these years Saint Sophronius worked hard at managing the monastery and improvement of teaching at the seminary located nearby. He and Archbishop Theodosius made it their task to acquire more books for the monastic library.

Saint Sophronius built a two storey church: the upper church was dedicated to Saint Theodore, the older brother of Saint Alexander Nevsky; and the lower to Saint John Chrysostom.

Bishop Innocent II (Nerunovich) of Irkutsk died in 1747. For six years afterwards, the Irkutsk diocese remained without a spiritual head.

Finally, on February 23, 1753, the empress Elizabeth (1741-1761) recommended the pious Igumen Sophronius of the Alexander Nevsky monastery to the Holy Synod as “a person, not only worthy of episcopal rank, but also someone completely able to fulfill the wishes and the hopes of the state and the Synod, and take up the burden of episcopal service on the far frontier and satisfy the needs of his flock in that harsh land, among wild primitives and lawless people.”

On April 18, 1753, Thomas Sunday, Hieromonk Sophronius was consecrated Bishop of Irkutsk and Nerchinsk in the Dormition cathedral.

Foreseeing difficult service on the distant Siberian frontier, the new bishop did not immediately travel to the Irkutsk eparchy, but rather began to gather educated and spiritually experienced co-workers. During this period Saint Sophronius visited at his original Krasnogorsk monastery. At the holy places of Kiev, he also sought the blessings of the Kiev Caves Saints for his service. The constant companion of the saint, as had been before, was the hieromonk Sinesios, sharing in his friend’s work.

At Moscow, Archbishop Platon of Moscow and Sevsk provided him with further assistance. He gave him fatherly advice for his task, since he was quite familiar with the peculiarities of the Siberian religious life. He forewarned him about the self-willed local authorities, and advised him to surround himself with trustworthy helpers.

On March 20, 1754 the saint arrived at Irkutsk. He went first to the Ascension monastery, his predecessor’s residence, and prayed at the grave of Bishop Innocent (Kulchitz), asking his blessing as he took up his assignment.

Familiarizing himself with the state of affairs in the diocese, the saint began the reorganization of the Spiritual consistory, monasteries and parishes, and appealed to the Holy Synod to send worthy men to the Irkutsk eparchy for priestly service.

Before the arrival of Saint Sophronius, the Irkutsk monasteries had already a century-old history. The founders of these monasteries were motivated by a fervent desire for monastic life. The wise hierarch appointed people of piety, wisdom, virtue, and with great experience both of life and spiritual matters as heads of the monastic communities. In 1754, Bishop Sophronius elevated his friend and companion Hieromonk Sinesios to be Archimandrite of Ascension monastery. He served the monastery for thirty-three years until his blessed repose.

In September 1754, the bishop issued a decree in which he expressed concern for the education and upbringing of the children of the clergy. He wanted them to learn the HOROLOGION, the PSALTER, singing and letters, and this instruction “ought to be conducted with all industriousness and the utmost diligence, so that the children might be able to fulfill the responsibilities of sacristan and deacon.”

Studying both people and circumstances, the bishop in his sermons and conversations exhorted all to a higher moral ideal. He devoted particular attention to the reverent and correct performance of the divine services and the Holy Mysteries, and he also looked after the moral purity of laymen. He was concerned about the position of women in the family, and defended them against their unjust inequality. The bishop attempted to set straight the Rule of divine services, and so he summoned priests, deacons, subdeacons and sacristans, and those who sang in the choir during services.

Traveling about the diocese, the saint noticed that censing and the ringing of bells were not being done properly in all places, and therefore he issued a decree restoring the proper way of censing and bell-ringing.

Called to apostolic service in this frontier region, Saint Sophronius realized that his duty was to enlighten the Christians of the area, and also to convert the idol-worshippers, who were very numerous in Siberia.

It was difficult to bring pagans to the Church of Christ, especially because sometimes there was no one to serve in the churches, and to borrow priests for missionary activity only made matters worse. Knowing that the Church services would have a salutary effect on non-Russians, the saint not only served with reverence himself, but also required it of all his clergy.

Saint Sophronius also contributed to the development of a stable culture among the local people. He offered them monastic lands for settlements and in every way he endeavored to isolate them from the influence of paganism. A constant throng of visitors came from faraway places for his blessing.

Even with his many cares, he did not forget his own spiritual life and eternity. He also led an ascetical life. His cell-attendant said that the saint “used simple food in small quantities. He served often, spent the greater part of the night at prayer, sleeping on the floor under a sheepskin or a fur, a deerskin or bear hide, and a small simple pillow.

The spirit of his ascetic life fit in with the general uplifting of the Christian spirit in Russia after the glorification of Saint Demetrius of Rostov (September 21), Theodosius of Chernigov (September 9), and the uncovering of the incorrupt relics of his predecessor, Saint Innocent of Irkutsk (February 9). This event inspired Saint Sophronius to greater efforts and encouraged him to ask for the help of Saint Innocent in his task of building up the diocese.

Until the end of his days Saint Sophronius kept his love for the Krasnogor Zolotonosh monastery, which had nurtured him in the days of his youth. He constantly contributed support for its upkeep, sending the necessary means for this.

Noticing a deterioration in his health, Saint Sophronius petitioned the Holy Synod to let him retire. The answer from Peterburg did not come right away, since it was difficult to choose a worthy successor.

The final days of Saint Sophronius’ s life were spent in asceticism and prayer.

Saint Sophronius is also commemorated on June 30 (his glorification in 1918).