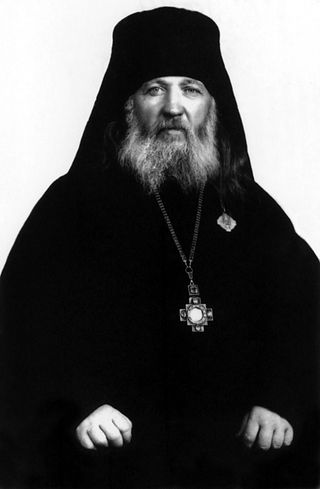 Our holy Father Joasaph was born Ioann Skorodumov on January 14, 1888, the son of a village priest in Novgorod. His mother died when he was six years old. At the age of ten his father brought him to Tikhvin, which housed the famous wonder-working icon of the Mother of God. There he completed the seminary preparatory school, after which he entered Novgorod theological seminary.

The boy was much influenced by the Church-centred life of Imperial Russia with its abundance of monasteries, hermitages and sketes in towns, lakes and forests, the wonder-working icons, the hermits unknown to the world, the wanderers and pilgrims, the religious processions with many choruses singing and the bell ringing – all this left a deep impression on the young ascetic. In summer, Vanya and his elder brother would go fishing and stay outdoors overnight, talking and reading about the great ascetics of old and the lives of the saints. On the way back they would perform the “podvig” of carrying a pail of fish on one shoulder without changing for miles, all the way home. At times their shoulders would be bleeding, and although such “podvigs” were discouraged at home by their elder sister, who acted as a mother for them, still the boys would be elated at having endured suffering. They also walked some distance barefoot in the snow, unseen by anyone…

In 1908, having brilliantly completed his seminary studies, Vanya entered the St. Petersburg Theological Academy, where he became the devoted disciple of its holy Rector, Bishop Theophan (Bystrov). Vladyka Theophan was a deeply learned theologian and a great expert on the Jesus Prayer; to him even the fate of the dead was revealed to a certain degree. Under his influence the young Vanya Skorodumov was introduced into the art of arts, which he practised so well that for the rest of his life he was always seen to be in a joyful state. Vanya’s academy thesis was called “Monasticism according to St. John Chrysostom”, and this saint had a deep and permanent influence on the spiritual life of the future archpastor. It was on the feast of St. John Chrysostom that he was tonsured into monasticism, and it was on the same day that he died.

Not long before Vanya’s graduation, Archbishop Theophan was transferred to Astrakhan, at the mouth of the Volga river, and after graduating Vanya gathered his few earthly goods and undertook the journey down the river to his Abba. On the way his fears were calmed by a prophetic dream that was exactly fulfilled.

Vanya was tonsured into monasticism with the name Joasaph after the recently canonized St. Joasaph of Belgorod. At first he was sent to teach in a seminary in Northern Russia, but then he was transferred to Archbishop Theophan’s see of Poltava, where he served as an army chaplain. In 1920 he was evacuated to Constantinople together with Archbishop Theophan, and taught there for a while before moving to Yugoslavia, where he taught in several seminaries and was known to serve Vespers and Mattins daily, a practice that he continued for the rest of his life.

A friend of his, a former pilgrim who roamed through many places of Old Holy Russia, was now in Canada. He wrote from there to Fr. Joasaph that the schism of Metropolitan Platon in 1926 left no legitimate Orthodox clergy in Canada,[1] yet the land was so reminiscent of Russia and was fertile ground for the seed of the Word of God. “Do you want to move?” he concluded. “I do!” was the reply, although Fr. Joasaph was quite aware of the hardships that awaited him.

Early in 1930, promoted to the rank of archimandrite, he arrived in Montreal, and six months later, on October 12, he was consecrated Bishop of Montreal in Belgrade by Metropolitan Anthony (Khrapovitsky) and ROCOR bishops. On handing him his archpastoral staff, Metropolitan Anthony reminded him of the nature of the world-view he would meet in Canada: “You are going to people who have long lived with an understanding of things that has nothing whatsoever to do with Christianity. Bring them the teaching of humility; accept this staff as a staff of benevolence and, as you bless the people who now stand before you, think of the flock there, who already love you.”

“In my life,” replied Bishop Joasaph, “two questions have especially occupied my attention. First, the exploration of the ways of God’s mercy.” He found this first in nature. “Then I began to observe human life; and even where free will was leaning towards evil, I always found God’s mercy. Then I decided to turn to that which is most sinful, most evil, and I turned to my inner life. It seemed that here there was no place for God’s mercy because there was nothing good in it. But even here I discovered God’s mercy, and I remembered the words of the Psalmist: ‘Whither shall I go from They Spirit? Or whither shall I flee from Thy presence? If I ascend up into heaven, Thou art there. If I make my bed in hell, Thou art there…’ Then I finally became convinced that the mercy of God towards man is limitless and boundless. The second question that I sought to answer was: will the Last Judgment be soon? Judging by signs in nature, by the moral state of humanity, and finally by myself, I felt that the time was close, that one had to hasten to do the work of God and bring into reality the preaching of His Kingdom.”

On arriving in Canada and discovering that there were very few Russians in the East, Vladyka decided to move to the West, where there were more. Moreover, there were many Ukrainians, Galicians, Carpatho-Russians and Bukovinians. So he moved his see to Edmonton, where he soon acquired a church.

Vladyka was an unmercenary, and came to Canada almost penniless. He lived and travelled entirely on the donations of his poor compatriots. At times, while going round his diocese, he would have hardly enough to pay the fare to the next village parish. For the first ten years of his service in Canada, he endured not only poverty and cold, but also much sorrow thanks to the rivalry of various church jurisdictions that had separated themselves from the One, Holy, Catholic and Apostolic Church. But by the end of the decade this penniless but always cheerful bishop had a cathedral church in Edmonton with living quarters for several clergy, forty parishes, a monastery at Whitefish Lake and the Holy Protection Skete in Bluffton, Alberta, where his friend V. Konovalov, who had called him to Canada and given up his house and all that he had to pay for the trip, became the abbot under the name of Archimandrite Ambrose.

In 1947 the ROCOR Synod decided to divide the Canadian diocese into two. The western half remained, as before, under Bishop Joasaph, while the eastern half was transferred to the jurisdiction of Bishop Gregory.

On November 25 / December 8, 1951, just after recovering from a serious illness, Vladyka was raised to the rank of archbishop and transferred to Argentina. Here he soon became deeply loved by all. During his first visitation of his diocese, which included Paraguay, he visited a sick woman who had lain paralyzed in a hospital for a long time. She asked for his prayers, to which he at once agreed, but he asked her whether she had faith in God and His ability to heal her. She said “yes”. Whereupon he prayed and gave his panagia to her to kiss. She was immediately healed. Again, the mother of Fr. V. Drobov had a severe headache when Vladyka visited them. As he was about to leave, he hit her with his fist right on the place of the aching teeth, and said: “That’s nothing, it will go away.” And at once the pain stopped…

Vladyka’s frail health and the hot climate of Argentina, especially after Canadian winters, drained his last strength, and he died a righteous death on November 13.26, 1955 and was buried in the English cemetery in Buenos Aires. After his repose he appeared to many people in their dreams. There were also cases of Vladyka giving help from the other world. But one of the most striking testimonies of his holiness comes from the lips of the gardener-gatekeeper of the English cemetery in Buenos Aires, D. Carlos. “Once when it was already dusk, I noticed that in the chapel they had forgotten to turn off the electric light, and I went there. Before I had reached it, my attention was attracted by a powerful light at the left side of the chapel. But when I came closer, I saw that on the grave of your archpastor there was such an enormous light. At first I was frightened, but then I thought: what can the dead one do to me? And I decided to come closer. There was no chance that it could be a reflection from the vigil light on the grave, since the light was blue like moonlight. It was something enormous (fue algo enorme). Although I am an atheist, I was terrified…”


Holy Father Joasaph, pray to God for us!

[1] To make a long story short: After the Bolshevik Revolution, persecutions against the Church compelled Patriarch Tikhon of Moscow and All Russia to issue a directive in 1920 to the churches abroad, that should the central administration of the Church in Russia become disabled, or should communication be cut off from it, they should become self-governing. In America, two self-governing Churches resulted, one under the leadership of Metropolitan Platon (Rozhdestvensky) now known as the Orthodox Church in America, and another under the leadership of Metropolitan Antony (Krapovitsky), now known as the Russian Orthodox Church Abroad. Yet other bishops remained loyal to the Moscow Patriarchate. The jurisdictional situation in Canada was unclear after this, which would have prompted Fr. Joasaph’s friend to write that there were no legitimate Orthodox clergy in Canada. —PR/OC. 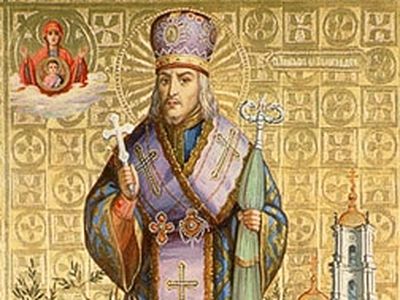 Saint Joasaph of Belgorod
So great were the labors of St. Joasaph that he soon became known to Empress Elizabeth I, who summoned him to court and listened to his homilies with great attention, later calling him to hierarchal service. In 1748 St. Joasaph was consecrated bishop of Belgorod and Oboyan. From that moment and until the end of his days, the saint was quite literally a good shepherd of his flock and knew each sheep by name.

Celebrations in honour of Archbishop Joasaph in Quebec

Celebrations in honour of Archbishop Joasaph in Quebec
October 15th through 17th, 2010, in the parishes of the Canadian Diocese that are situated in the province of Quebec, and first of all in St. Nicholas Cathedral in Montreal, celebrations of the 80th anniversary of the consecration to the episcopate of Archbishop Joasaph (Skorodoumov), who is justly called the enlightener of Canada, took place. 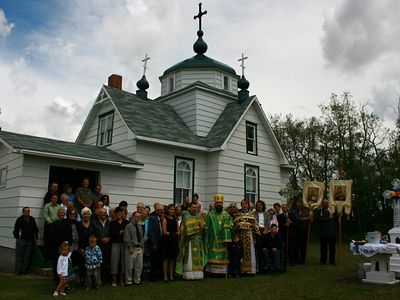 Moises26 ноября 2016, 18:00
Moss is a schismatic and a slanderer of the Church. He should not be propagate.