Homily at the Liturgy, January 8, 2011—the second day of Christmas, and the 85th anniversary of the birthday of Metropolitan Pitirim (Nechayev) 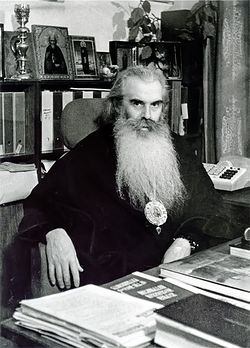 In the name of the Father, the Son, and the Holy Spirit.

Today, on the second day of Christmas, the Gospel is read in church about how the Mother of God and holy righteous Joseph fled with the Christ Child from Herod to Egypt.

But how many pious, good people remained in Israel then! How many innocent victims, beginning with the infants of Bethlehem, were slain by the evil wrath of King Herod!

Many years later, this would be repeated in the history of our Fatherland, Russia, when the successors of those ancient fighters against God would take over that nation. Then, many Christians in our land endured merciless persecutions from the descendants and heirs of King Herod.

But the Lord did not allow them to slay every Christian. Those who remained in Russia had to live on. They had to preserve until their very deaths the most important thing—faith in God, to preserve Christ in their souls as the apple of their eye. At the same time, they could not succumb to either sweet promises, nor to fierce rulers who tried to force them to bow down to Herod. “The Mother of God does not will it!” said the character in Puskhin’s Boris Godunov, in a phrase taken from folk tradition. Orthodox people survived, preserving their faith and hope. Under difficult conditions and circumstances unimaginable to us, they carried on their service blessed by the Lord.

Today we remember one of such people. Metropolitan Pitirim (Nechayev) was just such a person, who together with his family lived in Russia, preserved the faith, and preserved the Church for his deceived contemporaries and for the future generations. Just like the one about whom it was said in ancient Israel: In Rama was there a voice heard, lamentation, and weeping, and great mourning, Rachel weeping for her children, and would not be comforted, because they are not (Mt. 2:18), the same could be said of our nation. Many thousands of people were killed, hundreds of thousands of people were sent to prisons and concentration camps. Met. Pitirim’s father had to go through all of this, as did many of his friends and relatives. When he had grown to be a youth, the future metropolitan chose during those difficult times the path of service to God—a path that many of his ancestors had chosen before him. As I recall, his family’s priestly dynasty went back no less than three hundred years. The capable young man was an excellent student of a secular institute, but when the Church called him he did not hesitate a minute, and stepped upon the way of the cross. This path was not only misunderstood by many, it was slandered and subjected to base, malignant gossip.

Metropolitan Pitirim and everyone near him knew quite well what they were doing and what awaited them. It would have been much easier to remain a secret Christian, to become an engineer, which is what he was studying to be at the institute. He could have gone to church from time to time, without forgetting God. A promised career was in store for him—with his abilities he could have had a much more peaceful and comfortable life.

But Constantine Nechayev, which is what Vladyka Pitirim was called in the world, chose another path—to be true to his faith in Christ among his own people, during the reign of Herod. He and his co-strugglers heard the call of Patriarch Tikhon, who said, “May my name perish from history, but the may the Church benefit.”

Met. Pitirim raised many people in the Church. I would even dare to say that he raised all of you! During the reign of Herod’s heirs, who tried with all their strength to erase the very name of God from people’s memories, Met. Pitirim published books which were used and are still used by the Church in services. These were not only the books of Holy Scripture, not only prayer books, but all books needed to conduct Church services, including the Menaion. Furthermore, Met. Pitirim’s Menaion was compiled in that most terrible time more completely and thoroughly than it had ever been, both before the revolution and after. This was a great service by Met. Pitirim and his co-workers.

Remember them which have the rule over you, who have spoken unto you the word of God: whose faith follow, considering the end of their conversation (Heb. 13:7). Yes, Met. Pitirim preached the word of God! He was a remarkable orator and preacher. But that is probably not what he will be remembered for in Church history. His most important sermon was what he preached through his own life! Without any regard for slanderers, or maligners, he took responsibility under very difficult circumstances for what had been given to him to do by the Church. This is the living sermon that we should learn from him first of all.

He created the publishing department and fostered it himself; it was a unique creation of Met. Pitirim. From the ‘sixties through the ‘eighties, the Publishiing Department was a special place in Moscow at the time. It was a center of Church life, spiritual gathering and creativity. Amazingly kind-hearted people, wise laborers gathered there. They came there for self-sacrificing work for the glory of God, and they needed nothing more in life. After all, in order to work during those years in Church organizations, one had to more or less abandon everything. Vladyka and his co-workers worked from early morning (he would always arrive at 7:00 a.m.) and stayed until late evening, even until late at night. The atmosphere that Vladyka created was one of churchliness and piety, joy, love, mutual readiness to help, remarkable amicability, and humble service of the Church. I think that it would probably be impossible to recreate it in our times, if only because the Church in those days was persecuted. External persecution made people unite together in Christ.

Persecution is a natural state for the Church. There is a reason why the Apostle says that all who want to live piously in Jesus Christ will be persecuted. But the Church flourishes during persecutions! When we say that those days were difficult or tragic, we are only saying part of the truth. This was also a time when the Church flourished amazingly. The fruits which the Church brought forth speak for themselves—a host of martyrs! We have doubled the amount of saints in our calendar due to those very times.

Then a more peaceful time began, and that spirit of creativity and unity in the Church, for which the Publishing Department was famous, began gradually to wane and disperse. This happened during the final years of the Metropolitan’s time at the department.

We remember Met. Pitirim today as one of those heroes of the faith who created Church life in those years. We remember with great thankfulness him and all the archpastors, priests, and laypeople who stood with him shoulder to shoulder.

The hour will come when that great and precious life experience of the Holy Church will be more deeply researched. It is an experience in which we who stand here today, who lived during those times, also participated, however little. It is that period and that experience in which Met. Pitirim, who we remember today, accomplished his ascetical obedience. May his memory in the Kingdom of Heaven be eternal.