Friday of the First Week of Great Lent

Let no one be deceitful, let no one harbor anger, let no one nourish poison in his soul,
so that he might not receive Communion unto condemnation.
—St. John Chrysostom

On Friday of the first week of Great Lent, after the Vespers service with the Liturgy of the Presanctified Gifts, a moleben canon is sung in church to the Holy Greatmartyr Theodore the Tyro and koliva is blessed in his honor—boiled wheat or rice with honey. This celebration was instituted after a certain event in Church history. 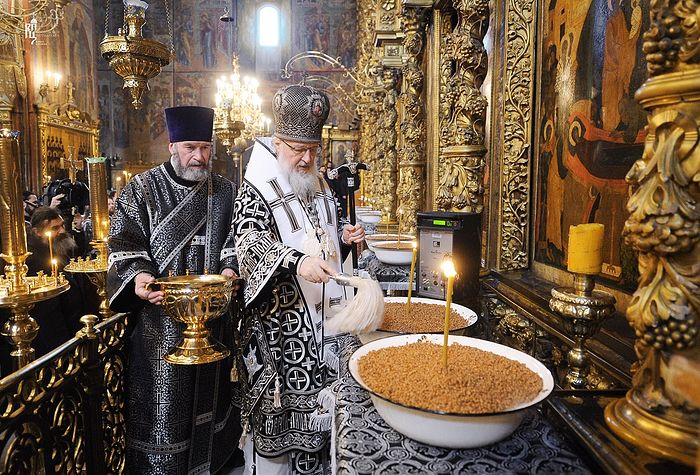 Blessing the koliva. Photo: Patriarchia.ru
In 362, the Greek Emperor Julian the Apostate in his desire to mock the Christians ordered that blood from sacrifices to idols be secretly sprinkled on all the food being sold at the markets of Antioch. The apostate wanted in this way to defile the faithful who had been fasting strictly during the first week of Great Lent. But Greatmartyr Theodore, who had been burned to death in 306 for his confession of the Christian faith, appeared in a dream to Bishop Eudoxius, told him about Julian’s command, and advised him to have Christians eat koliva for a week instead of the defiled food.

At the end of the first week of Great Lent, all the members of Christ’s Church confess and receive Communion of the Holy Mysteries. The communicants first confess their sins in the Sacrament of confession before the cross and Gospels on the analogian.[1] The cross and Gospels symbolize the invisible presence of God Himself, to Whom the penitent is really confessing. The priest is only a witness at this Sacrament. Seeing the person’s sincere repentance, the priest places his epitracheleon (stole) upon the penitent’s bowed head and reads the prayer of absolution, forgiving him his sins in the name of Jesus Christ Himself, and makes the sign of the cross over him. Having kissed the cross and Gospels, the person who has just confessed his sins receives the priest’s blessing to receive the Holy Mysteries of Christ.

Thou hast put to death the passions of my flesh by Thy divine Cross, and by Thy Passion Thou hast given all men freedom from the passions. Count me worthy also, Lord, to see Thy holy Resurrection, that I may receive Thy great and abundant mercy.

O merciful Lord, who art the source and fountain of purity, preserve us in the Fast. Look upon us as we fall before Thee: be attentive to the lifting up of our hands, O Thou who hast stretched out Thine hands upon the Tree and wast crucified for the sake of all those born on earth, the only Lord of the angelic powers (Sessional hymns from Matins).

I am bowed down to the earth, O Christ, by the burden of my sinful acts, and in dark discouragement I cry to Thee who lovest man: By Thy precious blood heal the incurable wounds of my soul, that I may sing the praises of Thy Godhead (from the canon at Matins).

Carelessly I have wasted my life, and my soul is heavy with the drowsiness of sin. To thine unsleeping interecession, all-pure Virgin, do I fly: let me not slumber in the sleep of death (Theotokion from the canon).

Come, ye faithful, and in the light let us perform the works of God; let us walk honestly as in the day. Let us cast away every unjust accusation against our neighbor, not placing any cause of stumbling in his path. Let us lay aside the pleasures of the flesh, and increase the spiritual gifts of our soul. Let us give bread to those in need, and let us draw near unto Christ, crying in penitence: O our God, have mercy on us (from Vespers).

Great are the achievements of faith! The Holy martyr Theodore rejoiced in the fountain of the flames as though in the still waters of rest; consumed in the fire, he was offered as a sacrifice to the Trinity. At his intercessions, Christ our God, do Thou save our souls.

Thou hast carried as a shield the faith of Christ within thy heart, and trampled underfoot the power of the enemy, O greatly-suffering martyr; thou hast received a heavenly and eternal crown, for thou wast undefeated in the battle. 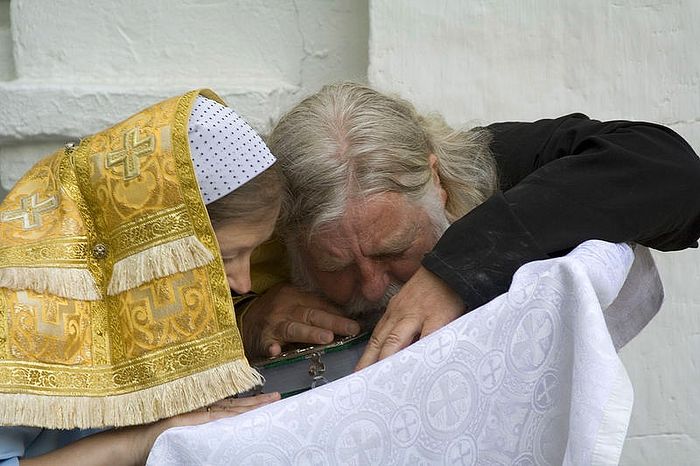 Sins that have been wept over, confessed, and absolved are no longer in us; or, they are not on us. They are like a bough cut off from a tree: When we loved sin, these sins were living boughs on the tree of our life and they fed from it. When we turned away from them, became disgusted with them, repented and confessed, we thereby severed them from ourselves. At the moment of absolution they fell away from us. Now they are dry branches, and the Lord comes to scorch in us this forbearance of transgression. Through the absolution of sins He is preparing a worthy dwelling place for Himself in us.

Those do well who, when preparing for confession for the first time after a long period of living in sins, first find an opportunity to have a preliminary discussion with a spiritual father and tell him the whole history of their sinful life. Then they will not be in danger of forgetting or leaving something out because of embarrassment during confession. Everyone would do well to carefully reveal all of their sins. The Lord gave the priest the authority to absolve not unconditionally, but under the condition that there be repentance and confession.

Consider fasting to be a weapon, prayer to be a wall, and tears, a bath.

Every sin is committed for pleasure, and all forgiveness of sins is gained through much suffering and sorrow.

Whoever does not weep over himself here will weep eternally there. Thus, it is necessary to weep here voluntarily, or there, from the torments.

A spiritual leaflet from Mount Athos gives the following directive:

Intending to confess, before going to the priest, seclude yourself, beloved brother, even if for an hour. Put aside all secular matters, collect your thoughts and thoroughly examine your conscience: How did you sin in thought, word or deed? In what did you offend God and your neighbor? Try to remember all the sinful events and their details. After this pray, grieve and wash your conscience with tears of repentance. Feeling relief in your heart, make a firm resolve to fight your bad habits and to become a better Christian. After preparing yourself in this way, go to the priest-confessor believing that God will forgive you--for He has never rejected a contrite and humble heart. When you come to the priest, confess without shame, do not hide anything, do not try to “save face.” For many of us have become accustomed to putting up a front for others, and try to appear better than we really are. Being used to hypocrisy, we are often ashamed to honestly admit our faults, omitting some and leaving others incomplete. Remember, my brother, what the Holy Spirit says in the Scripture: “Whoever hides his sin receives no benefit.” So speak openly without self-justification and without blaming others. If someone offended you, make peace with him and forgive him with all your heart, according to the words of the Lord: “If you forgive others then God the Father in heaven will forgive you. But if you do not forgive those who sin against you, then the Father will not forgive you your sins. Amen.

The following prayers of repentance with enumeration of sins can help an individual to repent at home and to come to church prepared for Confession:

I bring to You, my merciful Lord, the heavy burden of my innumerable transgressions, which I have committed from my very youth and up till today.

Dear brother or sister in Christ, never despair! Remember that there is no sin which is beyond God's mercy. For the Lord Himself promised through His prophet, "Though your sins may be like scarlet, I shall whiten them as snow; Though they be red like crimson, they shall be as wool" (Isaiah 1:18). 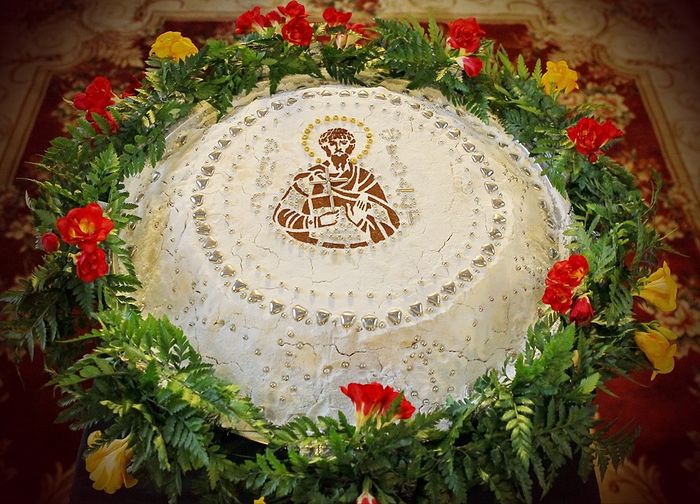 The Holy Greatmartyr Theodore the Recruit (Tyro) was a soldier in the city of Alasium of the Pontine district (northeast province of Asia Minor, stretching along the coast of the Euxine, i.e. the Black Sea), under the command of a certain Brincus. They commanded him to offer sacrifice to idols. St Theodore firmly confessed his faith in Christ the Savior in a loud voice. The commander gave him several days to think it over, during which time St Theodore prayed.

They charged him with setting a pagan temple on fire, and threw him into prison to be starved to death. The Lord Jesus Christ appeared to him there, comforting and encouraging him. Brought to the governor, St Theodore boldly and fearlessly confessed his faith, for which he was subjected to new torments and condemned to burning. The martyr Theodore climbed onto the fire without hesitation, and with prayer and gave up his holy soul to God.

This occurred in about the year 306 under the Roman emperor Galerius (305-311). Unharmed by the fire, the body of St Theodore was buried in the city of Euchaita, not far from Amasium. His relics were afterwards transferred to Constantinople, to a church dedicated to him. His head is in Italy, in the city of Gaeto.

Later on, fifty years after the death of St Theodore, the emperor Julian the Apostate (361-363), wanting to commit an outrage upon the Christians, commanded the city-commander of Constantinople during the first week of Great Lent to sprinkle all the food provisions in the marketplaces with the blood offered to idols. St Theodore appeared in a dream to Archbishop Eudoxius, ordering him to inform all the Christians that no one should buy anything at the marketplaces, but rather to eat cooked wheat with honey (kolyva). 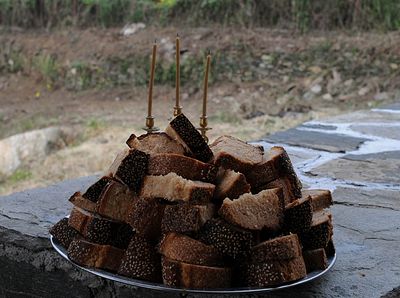 Fasting According to the Scriptures
Vincent Martini

Fasting According to the Scriptures
Vincent Martini
Notice that Christ mentions the discipline of fasting as a foregone conclusion for his followers. We also see that fasting is pointless if it is not done with the right spirit. Those who fast “publicly” and with great “fanfare” have received their reward, and it is both temporal and fleeting. True fasting is a relational and Spiritual discipline that affects one’s whole person and transforms one into the likeness of Christ. 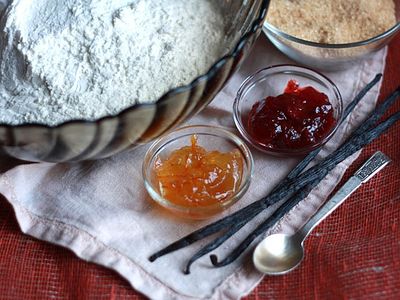 Lenten Holidays
Victoria Sverdlova
During the time of gastronomically austere yet spiritually joyous Great Lent, there is room for holidays as well—sitting quietly, joyfully, and warmly around the table with close friends and family. Different family members may be fasting to varying degrees—healthy adults, children, the elderly, the ailing—but the holiday table should be set with Lenten foods for all. In this case, it is time for tea, with all the attending sweets.

The First Week of Great Lent: Advice from pastors
Igumen Nektary (Morozov), Archpriest Igor Shestakov, Archpriest Vasily Mazur, Priest Vladimir Voitov
With whatever inner disposition we begin any task—that is how we will carry it out. It is the same for the fast: with whatever disposition we enter the fast—that is probably how we will go through it. That means that we need to relate to the first week of Lent with particular responsibility.
Комментарии
×