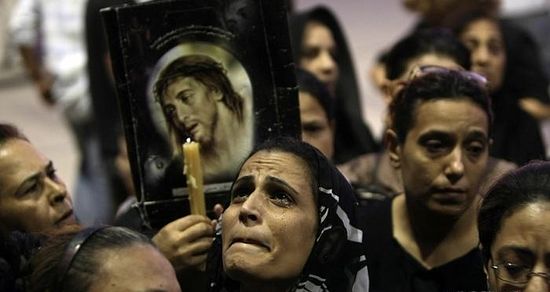 His Holiness Patriarch Kirill of Moscow and All Russia has made a statement about the tragic events in Syria:

For almost two years there have been military operations in Syria. Tens of thousands of people have been killed during this time; many old people, amongst whom are women and children, that is, civilians.

The majority of the Syrian people are our brothers in faith: in the city of Damascus is the center of one of the most ancient Orthodox Patriarchates—the Patriarchate of Antioch. Human blood is currently being shed in the streets of this city which remembers the Apostle Paul, and the ascetic labors of ancient saints. On this Biblical land where Orthodox Christians and Muslims peacefully lived side-by-side, shrines and churches are being desecrated, Christians are being driven from their homes, persecuted, often tortured and killed.

Houses have been destroyed, the infrastructure wrecked, there has been lack of food and medicaments, and many people have become homeless. Some have gone to their relatives, some have found refuge in special refugee centers, and others had to flee to neighboring countries, where usually nobody is waiting for them.

Our [Russian] people experienced similar things not long ago. During the Revolution, the Civil War and persecution of the Church, thousands of our compatriots were killed. There were many hierarchs, priests, and monks among them. We honor the labors of New Martyrs and Confessors of Russia. In addition, we must not be indifferent when innocent blood is being shed again today.

We cannot stop this war but can pray hard so that it may end soon, and we can give aid to the suffering people, amongst whom are our brothers in Christ.

Our Lord Jesus Christ in the parable in of the Good Samaritan (Lk. 10:29-37) indicates to us clearly who is our neighbor: anyone who needs help. Even if he or she has different views from us, has a different faith and lives in a different place; because the man who suffered from the hands of thieves proved to be just such a neighbor for the Good Samaritan.

I ask you to follow the call of Christ and to help our neighbors—those who now particularly need our support and sympathy.

To this purpose I bless on the coming Sunday, in all parishes of the Russian Orthodox Church, to organize fundraising in support of those in need in Syria. Money should be transferred to the accounts of the Synodal Department for Church Charity and Social Ministry which has been charged with coordination of this good undertaking. After the Church-wide fundraising has been completed the funds will be transmitted to the Patriarchate of Antioch.

I am praying that the bloodshed cease, and peace be restored on the Syrian land, and hope that your offerings will be pleasing to God.

+Kirill, Patriarch of Moscow and All Russia

Information on the Synodal Department for Church Charity (for donations in rubles):

For donations in US dollars:

For donations in Euros: