On the Sakkos and the Mitre 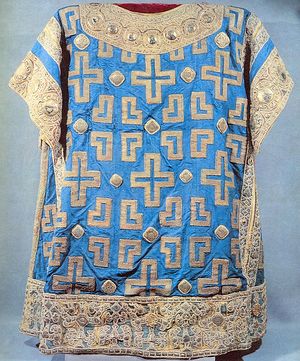 The sakkos, from the Hebrew sakk meaning “sackcloth” was part of the emperor’s wardrobe in Byzantium. This garment had no sleeves and was donned over the head and buttoned on the sides. In the eleventh and twelfth centuries, emperors began to give sakkos as a gift to patriarchs in Constantinople. Patriarchs often wore the sakkos only on Christmas, Pascha, and Pentecost. Several bishops began to wear the sakkos in the fourteenth and fifteenth centuries, but the phelonion continued to be the traditional hierarchical vestment.[1] By this time the sakkos had a acquired short sleeves. Saint Gregory Palamas, the archbishop of Thessalonica, is depicted on icons wearing the omophorion and sakkos with short sleeves. Many Greek bishops began to wear the sakkos in the sixteenth century. By that time the sleeves of the sakkos had become longer, yet shorter than the sleeves of the sticharion.

It is difficult to determine exactly when bells first appeared on the sakkos. It is evident, however that they serve as a reminder of the bells worn by Aaron on his robe, that their sound “will be heard when Aaron is serving as a priest, entering and leaving the holy place before the Lord” (Ex. 28:30). Bells produce a ringing sound whenever the bishop moves around the church. 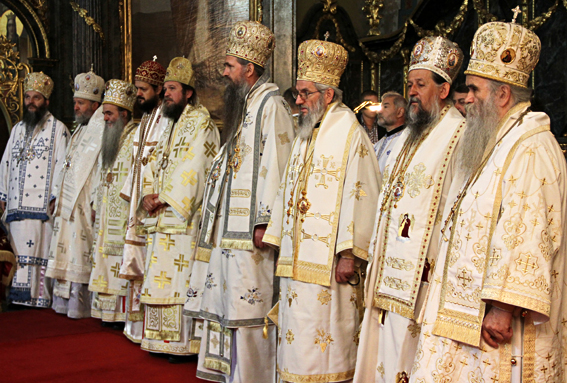 Serbian Bishops in sakkos and mitre.

The sakkos first appeared in Russia no later than the fourteenth century as a liturgical vestment of Moscow’s metropolitans. The sakkos of Metropolitan Peter (1308-1326) is preserved to this day. It was sewn in 1322 from light-blue satin material on which crosses in circles are woven with gold. Both “large” and “small” sakkos survives from Metropolitan Photius (1409-1431). They are distinguished by their unusual richness of surface embroidery. After the establishment of the patriarchate in 1589, the sakkos became the vestment of Moscow’s patriarchs. The sakkos was worn in the seventeenth century by metropolitans and some archbishops. In 1705 it was established that all hierarchs of the Russian Church must wear the sakkos. 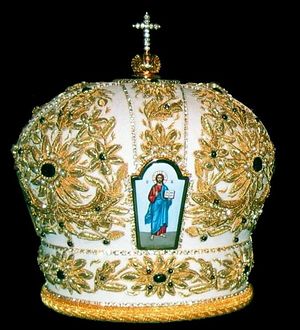 The mitre was not an attribute of the hierarch’s vestments during the earliest days. The scholar Aleksei Dmitrievsky believes “this adornment for the bishop’s head was made an article of their rank fairly recently”. He wrote that “nothing but a complete silence is maintained regarding the mitre in all ancient and later services for consecrating not only a bishop, but also a metropolitan and even a patriarch, which includes Greek, south-Slavic, and also our Slavonic-Russian service books, hand-written as well as printed and even those used in the practice of serving in the East and in Russia”.[2]

All eastern hierarchs and priests, with the exception of the Alexandrian (patriarch), conduct the sacred serving with uncovered heads… But, perhaps, somebody will ask whether it is not irreverent that the Alexandrian patriarch covers his head with the sacred covering (Gr. hieron epikalymma) as do countless others in accordance with ancient tradition? I do not ask this, for those who act in this way (and it serves as a justification) act according to the most ancient, or more accurately—“most lawful”[4]—tradition. Actually, the “lawful”[5] high priest wore on his head a turban (Gr. kidarin), which is called a mitre (Gr. mitran), as bishops who wear it like to call it. Perhaps they have it as the likeness of the image of the crown of thorns of the Master and King—which was on his head.[6] 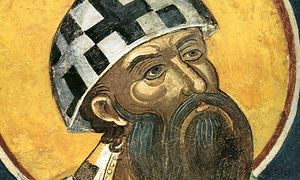 In the middle of the seventeenth century, only the patriarch wore a mitre during a cathedral service in the Patriarchate of Jerusalem. The Russian traveler Arseny Sukhanov was present at the service on Holy Friday and was a witness to this fact:

Every metropolitan wore a sakkos, and all were without caps.[9] Furthermore, nobody wore a cap anywhere, except for the patriarch. They have no caps and never had any. The metropolitan of Nazareth, having a worn-out hat, humbly asked the sovereign if he might deign to order a new one made, and the bishop of Nazareth, when he had arrived, gave this sovereign’s cap to the patriarch as well as a sakkos. And from the beginning there were no caps in Nazareth and at the present time they will not wear them. And it is said that the patriarch, receiving it, pawned it. And while he was with us the metropolitan of Nazareth did not wear a cap when serving both with and without the patriarch.[10]

In 1642 the sovereign Tsar Mikhail Fedorovich presented a mitre to the monastery of Saint Catherine on Mount Sinai which is preserved to this day in the monastery’s skevofilakia (room where the holy vessles are kept). It measures 20.5 cm (8.1 inches) in height, has a cross on top, and is adorned with eight icons, pearls, and precious stones. Another mitre, prepared in 1636 and presented to the monastery by Christians from the town of Yannin, has a height of 25.5 cm (10 inches). It is a magnificent work made of bronze and finished with precious stones, pearls, numerous icons, and depictions of cherubim. A third mitre, given to the monastery by “Protosyngellos” Nicephorus of Crete in 1678, has a height of 20.5 cm (8.1 inches) and besides precious stones and pearls, it is adorned with polychrome enamel.

Originally the liturgical headdress of Russian hierarchs was the kukol (a rounded klobuk). Beginning in the fifteenth century, the mitre emerged in the service of Russian hierarchs, when it had the appearance of a prince’s hat. They were decorated with embroidery and precious stones and were sometimes lined with fur on the bottom. The Russian mitre-cap differed in shape from the crown-shaped Byzantine mitres. For this reason, the latter caused bewilderment for connoisseurs of church rituals. One such connoisseur who was present during the service of the patriarch of Jerusalem Theophan in Moscow in 1619 observed, “The cap he was wearing was without a border on black velvet… like a gilded crown with stones planted and with no depictions of saints, but on the top is placed a cross and on the sides four cherubim and seraphim.”[11] In the sixteenth and seventeenth centuries, Greek hierarchs were pleased to receive Russian mitre-caps from Russian tsars, metropolitans, and patriarchs, but they did not use them but rather pawned them or refashioned them. Russian mitre-caps with sable linings did not conform to the eastern climate.[12]

The crown-shaped mitre appeared in Russia in the seventeenth century when it was adopted from Greek hierarchs by Patriarch Nikon in 1653.[13] All hierarchs in Russia began wearing mitres of that style. Mitres were also given to some archimandrites. This was made permissible by the decree of Peter the Great in 1705. In 1786 Catherine the Great awarded a mitre to her spiritual father, Archpriest John Pamphilov, and beginning in 1797, by the decree of Tsar Pavel I, the mitre came to be awarded to deserving archpriests as a mark of special distinction.

In contrast to the Greek Church in which all mitres are topped with a cross, two types are used in the Russian Church—with and without a cross. Originally the mitre with a cross appertained to the patriarchs of Moscow. In 1686 the right to wear a mitre with a cross was extended to the metropolitan of Kiev. Later, all metropolitans received this right while all archbishops, bishops, and archpriests as well as archimandrites and mitred archpriests wore the mitre without a cross. At the end of the of the 1980s, during the patriarchate of Patriarch Pimen, the Holy Synod established, in accordance with the Greek custom, that all hierarchs of the Russian Church are to wear mitres with a cross. The mitre without a cross now is worn by archimandrites and mitred archpriests.[14] (Orthodox Christianity Vol. III, The Architecture, Icons, and Music of the Orthodox Church by Metropolitan Hilarion Alfeyev. pp. 98-102)

[1] St. Nicholas Cabasilas mentions the phelonion and omophorian as the basic elements of the hierarch’s vestments in the fourteenth century and does not mention the sakkos at all. See, ‘Concerning Sacred Vestments’, 3, SC 4-bis, 366.

[2] Aleksei Dmitrievsky, “Mitre, Historical-Archeological Essay,” Handbook for Rural Pastors, No. 11 (Kiev, 1903) (Reprinted in Moscow Diocesan News, No. 4-5, 2003); References for the following editions: Relations of Russia with the East, 88, 101; Proskynitarion of Arsenius Sukhanov, 82.

[9] In the Slavic Bishop’s Service Book (Chinovnik) the mitre is called a “cap” (shapka).

[12] Dmitrievsky, Mitre. With a reference to the next publication: Relations of Russia with the East. Ch. 1, S. 88, 101. Proskynitarion of Arsenius Sukhanov, 82.

[14] In the West the mitre acquired the shape of a pointed crown, widening from the base and becoming narrow on the top. Such pointed mitres can be seen in paintings from the Middle Ages. The mitre was worn by western bishops including Roman popes. Beginning in the fourteenth century, popes wore the tiara—an egg-shaped hat from three crowns, symbolizing the secular and spiritual power of the pope on earth and also his power over the next life. The tiara in the Roman Church was eliminated by Pope John XXIII (1958-1963) and subsequent popes have worn mitres identical to those worn by other Latin bishops. 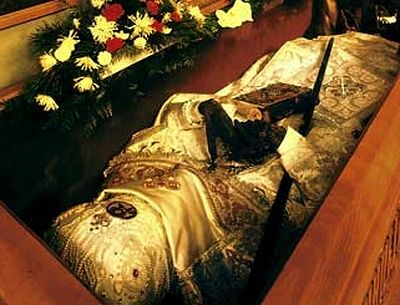 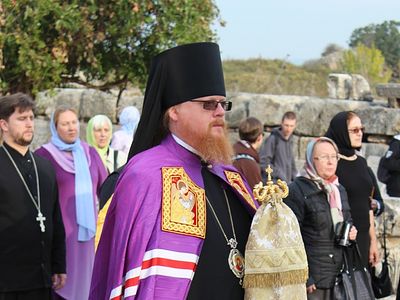 Return to Byzantium An interview with Bishop Tikhon (Zaitsev) of Podolsk

Return to Byzantium Bishop Tikhon (Zaitsev) The largest and latest pilgrimage by Russian Christians to the holy sites of ancient Byzantium on the territory of modern Turkey has recently come to a close. A group of sixty pilgrims and clergymen from the Russian Orthodox Church visited the places so dear to the Orthodox heart, from Constantinople to Ephesus, travelling to the regions of Bithynia, Pontus, Lycia, Pamphylia, Cilicia, Cappadocia, Galatia, and Pisidia, sanctifying their path with united prayer, and Divine Services in half-ruined churches. 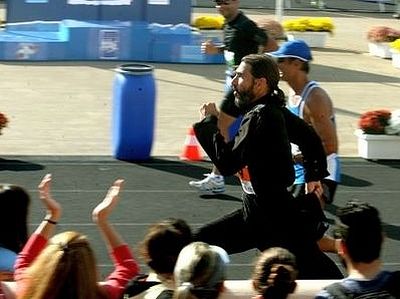 Chaplain runs Athens classic marathon in cassock Fr. Athanasios has the rank of captain; he lives and serves as a military chaplain in Ptolemais, Greece in the first army corps. A father of five children and an amateur runner, the priest decided to run 42 kilometres of the marathon to draw the people’s attention to the Church.
Комментарии