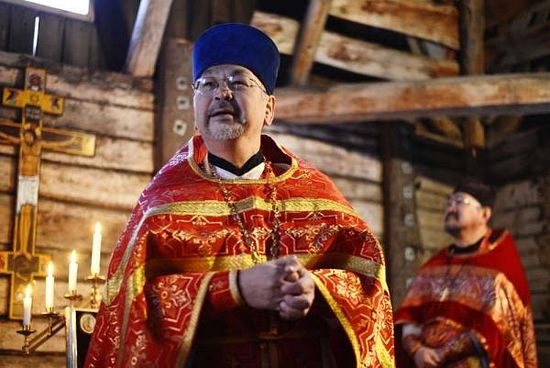 Photo by Ben Boettger/Peninsula Clarion -Father Andrew Thomas of Kenai's Holy Assumption of the Virgin Mary Russian Orthodox Church speaks to the small congregation gathered for Divine Liturgy in the St. Nicholas Chapel on Saturday, Dec. 19 in Kenai. Behind him stands Father Victor Nick of Ninilchik. "There is no other church like this in Alaska," Father Thomas said of the chapel, which was built in 1906 over the graves of three missionary monks who came to the Kenai area in the mid-1800s.

The rough wooden interior of St. Nicholas chapel was lit by a hissing gas lantern as Father Andrew Thomas, priest of Kenai’s Holy Assumption of the Virgin Mary Russian Orthodox Church, prepared communion bread, uttering a prayer for every cut he made.

In the opposite corner of the small, squarish building, altar server Roger James made other preparations: inspecting gaps in the chapel’s flat-hewn log walls — raised nearly 110 years ago — he decided where to set the small space heater that would heat the building during the nearly two-hour service ahead. It was just after 9 a.m. on Saturday — about an hour before worshippers would arrive for what Father Thomas said would be the first Divine Liturgy service in the St. Nicholas chapel during his 13-year tenure in Kenai.

Dec. 19 was the feast day of St. Nicholas, the 3rd century bishop of Myra (in modern-day Turkey) and namesake of both Kenai’s chapel and of the missionary monk buried beneath it. Igumen (a Russian Orthodox monastic title) Nicholai established the Parish of Kenai in 1845 and became its first priest when the site of the present town was occupied by the Russian Fort St. Nicholas.

Today, Nicholai and his assistant Makarii Ivanov are best remembered for distributing a smallpox vaccine in Dena’ina villages struck by the disease in the 1860s. Nikolai died in 1867, and when Ivanov followed him ten years later, the two were buried along with an unknown third monk in the yard of the original church that once stood nearby. The St. Nicholas chapel was built in their honor above the gravesite in 1906 at a cost of $300, according to an article published that year in the “Russian Orthodox American Messenger.” 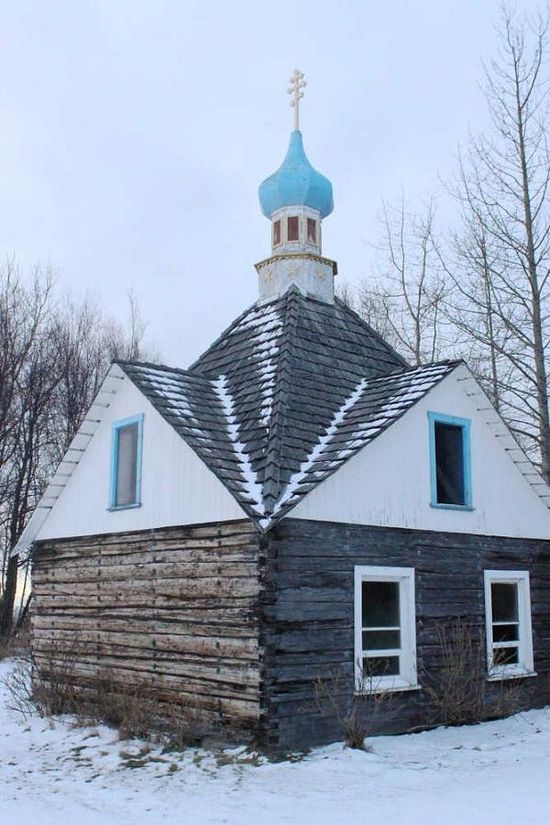 Kenai’s present Holy Assumption of the Virgin Mary Russian Orthodox Church now stands across the street from the old log chapel, which in more recent times has been seldom used. Of the ten or so worshippers at Saturday’s service, only long-time church member Ernie Jordan could remember another service there, which he guessed had been sometime in the early 2000s.

Jordan pointed to an icon he had hung at that time above the east-facing window behind the altar, and recalled another event in the building’s history he had participated in: the removal of a deteriorating wooden cross from its roof-top cupola. With help from two Homer Electric linemen, he had replaced it with an aluminum cross. He couldn’t remember when the replacement occurred — many years ago, he said.

After the service, Father Thomas said he didn’t have specific plans for future worship in the chapel. Jordan said the building still needs restoration — especially its leaky wood-shingled roof — and there are several items ahead of it in the church’s list of financial priorities.

For Saturday’s service, candles, altar ornaments, and icons of Christ, Mary, and St. Nicholas were brought to the chapel from the main church. Two other priests aided Father Thomas — Father Victor Nick, priest of Ninilchik’s Transfiguration of Our Lord Russian Orthodox Church, and Thomas’ literal father, a subdeacon visiting from Thomas’ native village of Marshall on the Yukon River.

The liturgy that the worshippers sang honored St. Nicholas as one who was “exalted by humility and enriched by poverty.” According to the story with which Father Thomas ended the service, Nicholas had been born to wealthy parents who died when he was young, leaving him heir to a fortune in his teens.

“But he didn’t want all this wealth,” Father Thomas said.

The saint’s legend claims he disposed of some of this wealth by helping a poor man whose daughters were in danger of being sold into slavery. Nicholas secretly gave the man money by hiding gold coins in the stocking he hung to dry every night in front his fireplace — inspiring the tradition of Santa Claus, St. Nicholas’ modern pop-culture avatar, leaving gifts in stockings hung above a fireplace.

Father Thomas ended by imitating the saint, distributing coins (not of gold, but gold-foil wrapped chocolate) to the three children who attended the service. 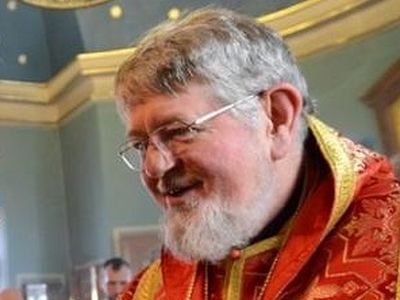 For the Love of the People Jesse Dominick, Bishop David of Sitka and Alaska

For the Love of the People A Conversation with Bishop David Mahaffey on Serving in Alaska Jesse Dominick, Bishop David of Sitka and Alaska "I decided go to the church early and pray a Panihkida for my wife in front of St. Herman’s relics. I went back in the altar, and I don’t know if it was St. Herman talking to me or who, but somebody said to me in myself, 'I replaced the beauty of your wife with the beauty of Alaska, and I replaced that love that you and your wife had with the love of these people for you.' And then I understood." 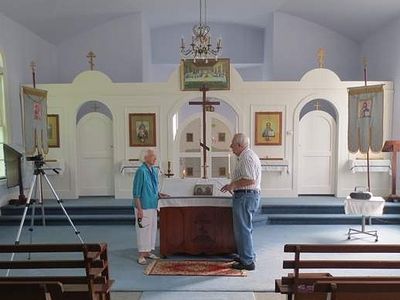 'The Disappearing Church' documents Russian Orthodox worshipers The story of the Russian Orthodox Church is indeed interesting. The church is full of history and is now in its 9th decade of worship. However, the church's future is uncertain, as members of the Russian Orthodox denomination are becoming rare in this area. Many of the members have died out, leaving only three who are faithful to the church each Sunday. Sisters Ann Mizerak and Mary Baken, and Ann's son David, still attend each week and listen to recorded message from the past. 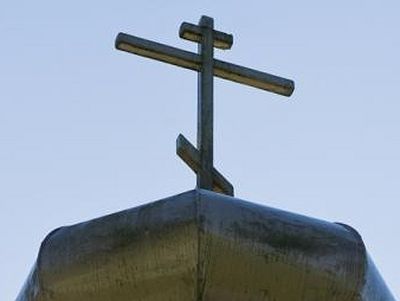 Team works to restore St. Nicholas Orthodox Church to its former glory More than 100 years ago, oral tradition goes, several Tlingit leaders in Juneau were having a recurring dream. In it, a short man with a white beard told them they should become Christian.
Комментарии