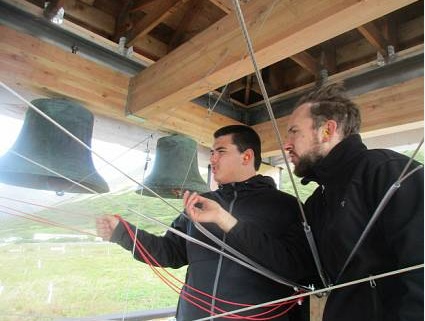 It was literally music to the ears of many community residents when Belkofski's historic church bells were installed and played for the first time in September at the Elders' Bell Tower of St. Herman Orthodox Church, a small parish in this remote fishing community on the Pacific side of the Alaska Peninsula. For those who grew up in the nearby Aleut village of Belkofski, as well as relatives with strong ties, it was an historic day.

"Many in King Cove trace their family history to the village of Belkofski," said Rev. Andrei Tepper, rector of St. Herman Church. "Many even grew up there and lived there for many decades. The church in Belkofski was a very important part of village life. Villagers loved the church, attended services regularly and contributed generously to its upkeep."

The bronze bells were originally cast in San Francisco in the 1880s. Soon afterward, they found a home in the Holy Resurrection Church in Belkofski. Nearly 100 years later, residents of Belkofski moved away to nearby villages, where they were offered new economic opportunities. The church's expansive collection, including numerous icons from Russia, the altar table, banners, candle stands and seven bells were transferred to King Cove, where a new Orthodox church was built in the 1980s.

"The bells and icons are an important part of our Orthodox worship space," said Tepper. "They must not be viewed as old, lifeless objects on display. They must be a living means to bringing people into a new and vital relationship with God in the local church."

More than three decades later, Alaska's Rasmuson Foundation helped breathe new life into the church after awarding a grant of $24,422 in support of the construction of the Elders' Bell Tower at St. Herman Church. Through fundraising and appeals the remaining funds were secured to move forward with the project. Construction on the tower began in July.

"It required a community team effort to get a big project like this off the ground," said Tepper.

The King Cove Harbor delivered building materials and lent tools so workers could get the job done. City crews dug the excavation for the foundation and assisted with grading the lot. A local resident offered his own heavy equipment and provided labor. He helped to lift the steel columns into place and later to lift the entire roof and set it on the columns.

"People brought materials that were needed, such as cable for the bells, tools, ladders," said Tepper. "Volunteers brought lunches to feed the workers. Peter Pan Seafoods offered the use of a crane and provided meals. The King Cove Corporation offered hotel rooms. PenAir and Grant Aviation donated air travel while the Belkofski Tribal Council sponsored the bell expert to come from Chicago. We appreciate the way the community responded to the call for help."

The tower is mostly complete, but still needs the siding, trim, dome and cross to be installed. The crowning touches, the historic bells, were installed in September (six Belkofski bells and three new Russian bells). However, before the bells were installed, several had to be refurbished. Local resident Warren Wilson and his son, Derek, took on the job in their welding shop.

"The historic steel clappers were very rusted and corroded," said Tepper. "In the best cases, they needed to be cleaned up by grinding to take the rust off. In the worst cases, they had to be built up with new steel. The welders keep the local fishing boats safe and productive. They generously offered their skills to get our bells ready. It's a blessing to have people in King Cove to help out in that way for our project."

Constantine Stade, an expert in bell ringing and installation of bell towers, arrived from Chicago to supervise and assist with the installation. Overall this was his eighth bell tower installation and first in Alaska.

"Church bells are a means of calling God's people to prayer and worship," Tepper said. "Constantine showed us how bells are rung differently depending on the occasion or feast being celebrated. The joyful, vigorous ringing at Easter is contrasted with the restrained, solemn peal heard at a funeral service."

The largest bell weighs 882 pounds. The second largest bell weighs well over 400 pounds and altogether, the bells weigh nearly one ton. Stade and Derek Wilson built stainless steel brackets for the three new Russian bells — the smallest of the collection. The installation called for a telescopic forklift to lift the largest bells because of their weight.

"Holes were pre-drilled in the beams, and it took precision to guide the rods into the holes," Tepper said. "The operators and crew used incredible teamwork to communicate and get the job done safely for both the workers and bells. They made a very difficult job look easy."

Stade constructed a ringing station using strings, cables and pedals. He then started playing the bells soon after installation.

"He started with the smallest bells and worked his way up to the largest bells, so the peals became richer as he went," said Tepper. "Many local people came to hear Constantine give a demonstration of bell ringing before he left King Cove. It was amazing to hear them played. The sound of the bells played together is so joyful and harmonious. They have a very rich quality. A woman whose mother lived in Belkofski years ago heard the bells on the internet and commented that she teared up with joy. I can imagine it must be a very emotional experience for people with memories of the church in Belkofski."

Irene Christiansen, an Elder and lay reader from Belkofski, had tears of joy as well.

Tepper said he believes it is beneficial to instruct the younger generation how to ring the bells. He said Stade taught Anthony Reeve, a local teenager, how to play them. His grandmother, Makrina, came from Belkofski.

"On Sunday, Anthony and some younger boys rang the bells at the service," he said. "Another teen, Elia Lind, is learning how to play and is doing a great job."

At this time, more cash donations are needed to complete work on the Elders' Bell Tower.

"Supporters are encouraged to donate funds, if they can," he said. "Without the generous grant from the Rasmuson Foundation, as well as donations from individuals, parishes and organizations throughout Alaska and the Lower 48, we could not have built the tower at this time. So many supportive people pitched in to help us with our project. We are very grateful."

Once the tower is completed, there will be a blessing and dedication ceremony.

"The Elders' Bell Tower will be dedicated in honor and blessed memory of our local Elders," Tepper said. "The Christian faith has been central in the lives of our people for generations. Our Elders embody that faith in God and service to the local community as a way of life in rural Alaska. The restoration of the bells in the Elders' Bell Tower is a sign of recognition and appreciation for our Elders. It's also a call to our youth and all of us to continue the tradition of living faith in our own lives."

Those wishing to support the completion of the bell tower are invited to send donations to St. Herman Church, P.O. Box 169, King Cove, AK 99612. 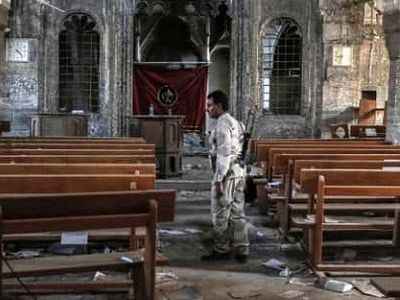 Near Mosul, church bells ring out in a Christian town freed from terror

Near Mosul, church bells ring out in a Christian town freed from terror
Inhabited by Assyrians since the first century, Bartella is one of the oldest Christian towns in the world. It was home to some 15,000 people until the summer of 2014, when they fled Isil’s lighting strike across northern Iraq. 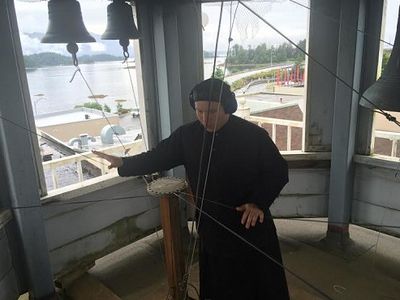 Deacon’s music a bell-towering achievement in Sitka
“Instead of pulling the strings, I tap all of the strings, and that’s why I can play it so fast, and in so many different ways. That’s why they sound so awesome,” Madsen said, laughing. 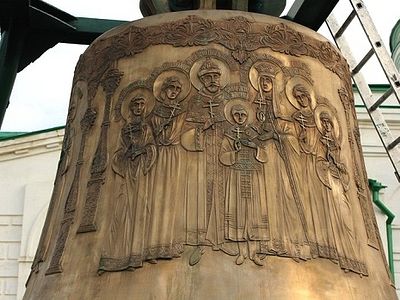 Tsar Nicholas II Bell Established in the Urals - One of Russia's Largest
Paul Gilbert
The Tsar Nicholas II Bell - which depicts the images of the Holy Royal Martrs - weighing 16.5 tons was installed earlier this week in the bell tower of the Transfiguration Cathedral in St. Nicholas Monastery in Verkhoturye (Sverdlovsk region), a major spiritual center in the Urals. The bell is the third largest in the Archdiocese of Yekaterinburg and one of the twenty largest bells in Russia.
Комментарии