Christians and Muslims in the World 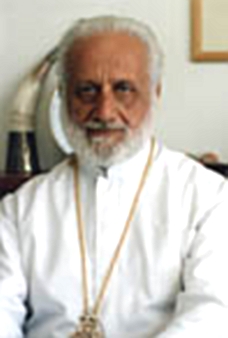 Met. Georges Khodr of Mount Lebanon.
It is extremely difficult to talk about the relationship between these two communities in the world because of the confusion of the religious and political levels within them. Starting from this, religion and the world are always joined in the Islamic mind, according to what most religious scholars say. From this reality, Christianity in the eyes of Islam is the Christianity of the West that since the Crusader campaigns is always politicized. For a period of two hundred years there was combat between a West that was conscious of its own Christianity and the East. Then came colonialism, which in part targeted the Dar al-Islam. Since then the West is always in need of an enemy, it replaced enmity for Communism with enmity for the world of Islam and from that time the West was filled with scholarly studies about Islam, some of which are good and some of which are bad.

The scene is that Europe has been more civilizationally advanced than the Dar al-Islam since the fourth century of the Hijra, while before this the Muslims were the ones with philosophy and science. The Arab East, the bearer of Islamic thought, began to retreat and went back to repeating itself and became civilizationally and materially impoverished. This is what partially explains its tumultuous uprising in terrorist groups supplied with weapons bought from America, which has become the heart of the West, or with weapons sent by America. In other words, the West is slaughtering itself with weapons it produces and whose sale and distribution is ostensibly not supervised. That it, the West itself feeds Islamophobia and ignores whether it will meet its consequences. In this picture, who is responsible for the massacre of Christians in an Iraqi church?

This means that the encounter between Christians (who are always Westerners in the mind of Muslims) and Muslims is impossible because what is involved in reality is not Islam and Christianity but Muslim peoples and Western Christian peoples. This is what leads us to the first question, which is the ability of the Islamic mind to break itself from blending religion and the world or the state and the Islamic world, since it is what the Qur’an calls ‘the first things’ in relation to the last things. That is, the question of how to translate in political terms, the inspired statement, “The last things are better for you than the first” (Surat al-Duha 4). Do the first things have complete independence from the last things since the Dar al-Islam is necessarily armed against the West which is arrogant and eager to stomp on the poor? The second questions is are there powers in the Eastern Christian or Western Christian world that are able to put forward a church that is above political desires? I do not have a realistic answer to these two questions. However, my theological and historical conviction is that a Russia that is once again inspired by her Orthodoxy and the Orthodox Balkans after their break from the Ottomans do not harbor enmity to Islam. In the Russian Federation there are no less than twenty million Muslims who live in peace. Ataturk, after ridding himself of the Greek Christians in Anatolia, no longer had the problem of Christians among his people.

Perhaps there is a third question. How can the West, which has effectively adopted the Islamic view of the blending of religion and state, return to the purity of its Christianity which does not know this blending? Can countries be run by saints?

One of the aspects of this delusion is that Muslims, including Muhammad Abduh, Rashid Rida, and perhaps al-Mawdudi, believed that they had only one need, which was to adopt science and technology without changing their understanding of Islam, because within it is the divine view of man and of creation. There is no need for a new view of shari’a or of a new interpretation of the Qur’an or a historical reading of it. Islam is eternally the same and what the first generation of Muslims left us is the truth, since they united laws and jurisprudence and interpretation on the one hand, and the words of God on the other. This is an absolute view of man and of Islamic history, but it is all determined by the word of God. Here we have a problem that is left for Muslim thinkers to solve. Is Protestantism possible in Islam?

In contrast, the countries called “Christian” have become secularized. This means that in European and American life there is no return to God in social life. Of course, it is not true that the West is cut off from faith. Those who say that do not follow Christian thought in the world, however this is separate from political thought.

This brings us back to the meeting of Islamic thought stripped away of all politics with Christian religious thought that looks down on politics and does not mix with them. That is, it brings us back to the purity of spiritual life in both Islam and Christianity and to a dialogue between religious scholars and pious people from the two religions. I mean by this to their true religiosity. This assumes a pure reading of love by Christians of Islam and by Muslims of Christianity. This assumes freedom from worldly benefits and feeling of the domination of one thought over another, free of violence. To expound your faith in peace is to love little or much in the two religions. Those who know their religion do not fear a movement such as this. However, it cannot take place in a country based on political sectarianism. I do not deny Lebanon’s desire to study civilizations in tranquility but that requires significant knowledge of the other and peace is a requirement for dialogue.

If this dialogue is a mask for missionary activity or da’wa, it is not a dialogue. It is a war without weapons. I do not deny the legitimacy of missionary activity and da’wa, but the reality of things leads me to believe that a billion and a half Muslims and two billion Christians will continue to increase in number until the final hour. It is grandiose to think that you can Islamize or Christianize the world.

Any real and sincere encounter between us on the level of the world assumes that we are all free from being fused into any international blocs. This alone ensures us peace in its political sense and so after today there is no conflict because of our liberation from the nightmare of history that divided us and through our detachment from current political factors whose actors desire our division.

It might escape us here that our scholars lived for a time in Baghdad and disputed theology at the Abbasid court with the caliph’s invitation in a spirit of peace and scholarship and refinement. Thoughts were exchanged.

Everyone who studies religions knows that between them there are similarities and distinctions that cannot be surmounted in most cases. However, distinctions can be eliminated or surpassed in some cases and this requires comparative studies that lead to a sound view of the religions.

However, the closeness that I am putting forward is that Christians and Muslims in many countries have lived not only in harmony but also in cooperation. The best example of this is the first period of Umayyad rule when Christians were important functionaries in the Islamic state on account of their knowledge of financial matters, administration, and the navy. They were familiar with Islam and practiced their own religion and wrote Christian theology in Arabic—that is, not in a way that was limited to their own flock. The image of al-Andalus of eight hundred years of convivencia under Arab rule is that mutual social understanding and frequent encounters between scholars was the typical situation.

In sum, the social contract is in principle possible between people of the two religions as long as we are certain that unity of religion is not a necessary condition for social unity under the protection of a secular civil government in each country. To put things more clearly, fusion into a single society and the building up of a single state are possible through good governance for living together. Important basic things in all these fields do not need unity of religious belief. Mutual respect in honesty is sufficient.

However, all of this requires serious, continuous effort that takes us to the point of asceticism. In Christian language this is called love, and in the language of Islam it is called mercy or compassion or friendship.

From where do these virtues come to people? We see that they come down upon them when they know divine love or something approaching it. No crusade, no conquest, no colonization, no victory is from God. Without all these things, God has the right to rule His eternal vineyard so that we will be, Muslims and Christians, as one people. 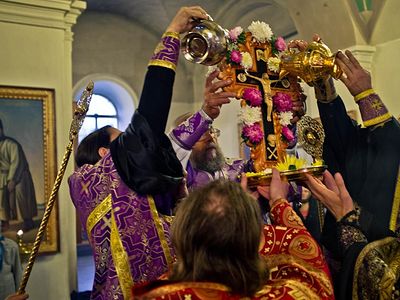 The Exaltation of the Cross Met. Georges Khodr

The Exaltation of the Cross Met. Georges Khodr The Cross is our pride, by which we accept the death of the Master as the way to Resurrection for deliverance from all sin. This is the center of our faith. This is our vitality. 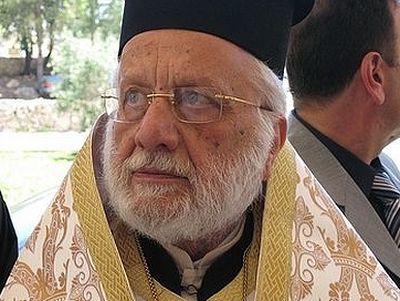 Met Georges Khodr: Pascha All of us, in life and death, are brides of Christ. Do you truly believe on account of this that you are risen from the dead? 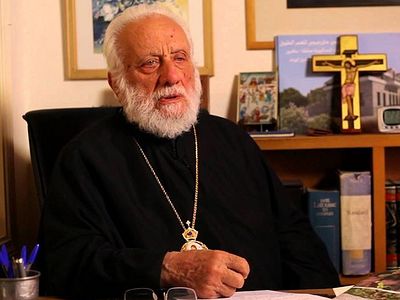 The Day of Prayer for the Kidnapped Bishops of Aleppo Met Georges Khodr's Sermon for Thomas Sunday Christ is alive: He gives us life. He raises each of us from our misery and our grief. Christ enters into the sorrowing heart and not only inside the walls of the church.
Комментарии
Войдите через FaceBook ВКонтакте Яндекс Mail.Ru Google или введите свои данные: