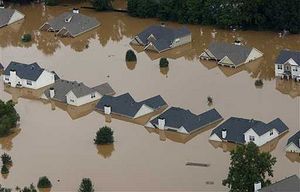 A shipment of personal health kits, many of which were donated by Orthodox Christians from across the United States, have been shipped by International Orthodox Christian Charities (IOCC) to Birmingham, Alabama for distribution to survivors of recent severe storms and tornadoes that devastated the area in late April. The kits, valued at more than $120,000, represent the first of several planned shipments of relief supplies that have been requested following an assessment by one of IOCC's Frontline responders working in Alabama.

The Greek Orthodox Ladies Philoptochos Society also announced its support today for the IOCC response to Alabama and flood areas along the Mississippi River and committed $20,000 from the Society's National Emergency Fund.

"Accommodations are being found for the many affected residents of the stricken areas," reported Deacon Dan Gray, a retired Naval Officer from Eagle River, Alaska and member of the IOCC Frontline who has been in Alabama since May 5. "There are now only about 150 people living in shelters – a good sign considering the scope and severity of this disaster."

Trained in emergency management, critical incident response and pastoral care in crisis, Deacon Gray has been making assessments and providing pastoral care. He visited many of the badly damaged, small communities to the north and west of Birmingham and is coordinating IOCC's response in cooperation with local Orthodox parishes.

"There are many pressing and ongoing needs that merit our attention and that will be fruitful for prayerful support and actions on the part of the Orthodox churches in the area," said Deacon Gray.

In addition to the shipment of personal hygiene items, IOCC has also provided tents, air mattresses, flashlights, and other supplies for displaced homeowners who are attempting to stay on their own property to expedite recovery efforts, clean up and to secure their remaining possessions.

IOCC has also been working to equip church and community volunteer crews that will be working this weekend to help tornado-affected residents all over Alabama. A second shipment of relief supplies, to include toothpaste, school kits, books, quilts and household cleaning supplies is expected to arrive to Alabama next week.

"In addition to the material items, more prayer, much compassion, smiles and willingness to listen and grieve with hurting people is needed," said Deacon Gray.

While the response in Alabama continues, IOCC is also monitoring the historic flooding along the Mississippi River and the needs of communities that will emerge as floodwaters recede.

You can help the victims of disasters around the world, like the natural disasters in the United States, by making a financial gift to the United States Emergency Response Fund, which will provide immediate relief as well as long-term support through the provision of emergency aid, recovery assistance and other support to help those in need. To make a gift, please visit www.iocc.org, call toll free at 1-877-803-IOCC (4622), or mail a check or money order payable to IOCC, P.O. Box 630225, Baltimore, Md. 21263-0225.

IOCC, founded in 1992 as the official humanitarian aid agency of the Standing Conference of Canonical Orthodox Bishops in the Americas (SCOBA), has implemented relief and development programs in 33 countries around the world.