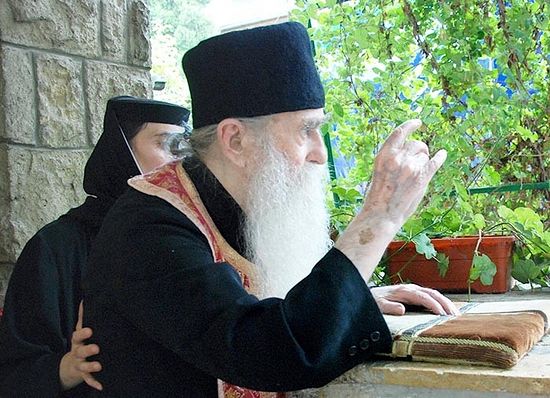 Fr. Arsenie (Papocioc).
On July 19, 2011, the renowned spiritual father of Romania, reposed in the Lord. His Beatitude Daniel, Patriarch of the Romanian Orthodox Church gave the eulogy at the funeral of Archimandrite Arsenie (Papacioc), at the Saint Mary Monastery in Techirghiol, Romania on Thursday, 21 July 2011. His eulogy appeared on the website of the Romanian Patriarchate, Basilica.ro:

It was with great sadness that we learned of the passing away of Rev. Archimandrite Arsenie (Papacioc), one of the great father confessors of the Romanian people.

A symbol of Romanian monasticism of the late twentieth, early twenty-first centuries, Fr. Arsenie (Papacioc) was a great counselor through his exemplary life, and through his profitable teachings, delivered with much warmth and love for his many spiritual children, as well as for the crowds of pilgrims who came to his cell to receive his blessings. He was a living witness of the presence and work of the Holy Spirit in our righteous Church.

Born on the feast of the Dormition of the Mother of God in 1914, in Misleanu village, Perieţi commune, county of Ialomiţa, Fr. Arsenie, baptized Anghel, was the seventh child of his well to do and merciful parents, Vasile and Stanca. He so honored the Protectress of his birth in this world that he dedicated his whole life to the Holy Birth Giver of God, and to the Church of Jesus Christ our Lord.

Having felt a true vocation for the monastic life, he spent his apprenticeship first at Cozia Monastery, and then he became a monk at Antim Monastery of Bucharest under the supervision of fathers Petroniu Tănase, Benedict Ghiuş and Sofian Boghiu.

He completed his spiritual formation in Moldova, at Sihăstria, Neamţ and Slatina Monasteries. During the difficult times of atheist communism, Rev. Arsenie continued the spiritual work of father Cleopa Ilie from Slatina Monastery, having been a living stone at the Spiritual Academy that operated for a time at the place of worship founded by prince Alexandru Lăpuşeanu of Moldova, together with Hieromonks Paisie Olaru, Antonie Plămădeală, Andrei Scrima, Petroniu Tănase, Daniil Sandu Tudor and others.

He lived for a time in the solitude of the Neamţ Mountains, accompanying Archimandrite Cleopa Ilie during the hard years of persecution of Romanian monasticism.

Father Arsenie suffered a hard life, and the trials of the communist prisons where he was humiliated and beaten for his faith in God. While suffering for his religious convictions, he turned his prison into a window to heaven, because faith and love cannot be ever imprisoned inside any walls. After his release from prison, Father Arsenie served as missionary priest in Transylvania and within the Archdiocese of Bucharest, at Cheia, Cernica and Căldăruşani, and from 1976 on at the Saint Mary Stravropegic Monastery Techirghiol.

Father Arsenie was a good orator and writer. His books are lights and steps to resurrection for his readers, because they show that eternity can be hidden in a moment, as he named one of his books, Eternity Hidden in a Moment (2004)—the moment of the meeting with God, transfigured in continual progress in the light and love of the Holy Trinity.

As spiritual father of several servants of the Church and of the crowds of faithful, Archimandrite Arsenie (Papacioc) was a wise counselor, even-tempered and merciful, who always urged the faithful to cultivate the greatest Christian virtue—the love for God and neighbor. Fr. Arsenie was more a healer of the souls wounded by sins, than a judge of sinners. He harmoniously merged merciful kindness with encouragement for spiritual improvement. He was a man of peace and spiritual joy. His face, full of light, peace, joy, and hope, was always an icon of the presence of the deifying grace in his spiritual life and work. He had in his soul the peace and joy of the Kingdom of God, which he looked for and preached all his life on the earth.

Now the soul of Rev. Archimandrite Arsenie (Papacioc) has departed for the Kingdom of God, full of years, virtues and spiritual gifts, which he cultivated through much prayer, patience and effort.

We pray God to give rest to his soul amongst the host of His righteous servants and saints, and we convey words of comfort and blessing in the firm hope of the Resurrection, of the light and peace in the Kingdom of God, to the members of the community of Saint Mary, Techirghiol Monastery, to all his mourning disciples, and to all those who knew and loved him.

Patriarch of the Romanian Orthodox Church