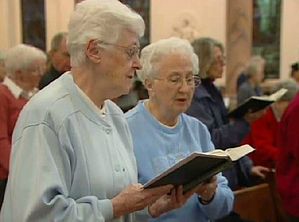 Eleven congregations of Catholic nuns have partnered with Indianapolis area hotels to educate workers about prostitution and sex trafficking, which are often byproducts of large sporting events, according to the Catholic News Service.

As part of the effort, the women worked with the Indianapolis Department of Health and Human Services to print brochures containing facts about human trafficking, as well as hotlines and shelters workers can contact to report suspicious activity.

"The hotels are going to be busy and we want them to be able to do what they have to do," Sister Ann Oestreich told the Catholic News Service. "The Super Bowl is a celebration, but we don't want exploitation to be part of it."

An estimated 10,000 prostitutes flocked to Miami for the 2010 Super Bowl, according to Cincinnati's WLWT. In 2011, Dallas police made 133 prostitution arrests.

Similarly, ahead of the 2010 World Cup, officials estimated 40,000 sex workers would flock to South Africa to meet the demands of nearly half a million sports fans, the Christian Science Monitor reports.

And while a 2010 article in the Wall Street Journal reported that number to have been likely exaggerated, human trafficking continues to be a concern during large sporting events.

Indiana officials are also worried about the damage human trafficking can have on victims and the community as a whole.

Gov. Mitch Daniels has asked officials to "toughen" laws, while activists such as Theresa Flores, a woman who was a victim of sex trafficking at age 15, have begun to speak out about the situation.

"The more I speak out, the more survivors reach out to me," Flores told WLWT News 5. "Middle-class women and even middle-aged women say it happened to them -- that they were being forced."

Speaking with WTHI, Sister Denise Wilkinson said raising awareness of the issue was the first step toward prevention.

"I think it's so hard to believe this kind of evil exists anywhere near us," Wilkinson told the station. "So raising awareness and then to point out appropriate steps, possible steps that the ordinary person like ourselves can take to end it."

Of course, human trafficking isn't just a problem on Super Bowl Sunday. According to the Grand Rapids Press, an estimated 18,000 people are thought to be brought into the country as part of human trafficking operations each year.

Ahead of last year's Super Bowl, religious nonprofits in Texas stepped up efforts to educate the public about sex trafficking, TIME reports. The groups sponsored PSAs and placed billboards near Dallas in an effort to raise awareness.

Although most link human trafficking with third world countries, 83 percent of reported cases this year were U.S. citizens.