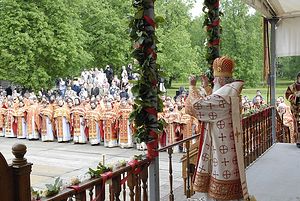 On May 19, 2012, His Holiness Patriarch Kirill of Moscow and All Russia officiated at Divine Liturgy under the open skies at Moscow’s Butovo Square near the Church of the Holy New Martyrs and Confessors of Russia.

The divine services held at the site of the mass executions and burials of the victims of political oppression, including many clergymen and laypersons now glorified as New Martyrs, launched the celebrations devoted to the fifth anniversary of the signing of the Act of Canonical Communion between the Moscow Patriarchate and the Russian Orthodox Church Outside of Russia.

The Primate of the Russian Orthodox Church was also joined in the service by: Archimandrite Aleksi (Polikarpov), Prior of Danilov Stavropighial Men’s Monastery; Archimandrite Savva (Tutunov), Deputy Chancellor of the Moscow Patriarchate; Archimandrite Feoktist (Dimitrov), Representative of the Bulgarian Orthodox Church to the Patriarch of Moscow and All Russia; Protopriest Dimitry Smirnov, President of the Synodal Department of Cooperation with the Military and Security Services; Protopriest Vsevolod Chaplin, President of the Synodal Department of Church and Society; Protopriest Vladimir Divakov, Secretary of the Patriarch of Moscow and All Russia on Moscow Affairs; Protopriest Alexander Ganaba, Secretary of the Moscow Diocesan Administration; Protopriest Nikolai Balashov, Vice President of the Department of External Church Relations of the Moscow Patriarchate; Protopriest Vladimir Vorobiev, Rector of St Tikhon’s Orthodox Humanitarian University; Protopriest Mikhail Ryazantsev, Senior Priest of Christ the Savior Cathedral; Hegumen Isidor (Tupikin), Secretary of the Administration of the Moscow Patriarchate; Protopriest Kirill Kaleda, Rector of the Church of the Holy New Martyrs and Confessors of Russia on Butovo Square; clergy members of the delegation of the Russian Orthodox Church Outside of Russia; and deans and clergymen of Moscow and the Moscow oblast.

Also praying at the service were abbesses and residents of the convents of Moscow Diocese, pilgrims from the Moscow region, and the St Tikhon’s Orthodox Humanitarian University Choir sang under the direction of TI Koroleva.

After Liturgy, His Holiness Patriarch Kirill performed a litany for the repose and salvation “of the archpastors, pastors, monastics and laity who suffered and were killed from disease, starvation and cold in the prisons and chains during the years of persecution for their faith,” and lifted up prayers for the New Martyrs and Confessors of Russia:

“O Holy New Martyrs and Confessors of Russia: hierarchs and pastors of the Church of Christ, Royal Passion-bearers, righteous princes and princesses, valiant warriors, monastics and laymen, pious men and women, of all ages and classes, who suffered for Christ, confessing faithfulness to Him even unto death and receiving from Him the crown of life!

During years of brutal persecutions which befell our land from the atheists, under trial, imprisoned and in the pits of the earth, in bitter labors and every sorrowful condition you exhibited patience and valorous hope. Now you revel in the fruits of heaven, standing before the Divine Throne in glory and lift up intercessions with the Angels and all the saints to the Triune God.

For this reason we unworthy souls beseech you, our holy ancestors: do not forget your earthly Fatherland, which had fallen under the burden of the fratricidal sin of Cain, desecration of holy things, godlessness and lawlessness. Pray to the Power of the Lord to confirm His Church unshaken in this wicked and turbulent world; and may the spirit of brotherly love and peace be reborn in our land; and again let us be the royal luminosity, the people of God, chosen and holy, glorifying now with you the Father and the Son and the Holy Spirit unto the ages of ages. Amen.”

Fr Kirill Kaleda then welcomed His Holiness, saying in part:

“Today I wish to remember the events of eight and five years ago for eight years ago here, in this holy site, the first joint prayer of His Holiness Patriarch Alexy II of blessed memory and the delegation of the Russian Orthodox Church Outside of Russia were lifted up, which began the discussions on the reestablishment of canonical unity within our Church. By the mercy of God, and doubtless by the intercession of the Holy New Martyrs and Confessors of Russia, five years ago the Act of Canonical Communion was signed. And exactly five years ago, during the celebration of this event, on May 19, 2007, the stone church on Butovo Square was consecrated. This church became a monument to the New Martyrs and Confessors of Russia, who suffered both on this very site and in other places, and became a visible symbol of our Local Church.”

In memory of this divine service, Protopriest Kirill gave His Holiness an icon depicting St Tikhon, Patriarch of All Russia, Holy Hieromartyr Seraphim, Metropolitan of St Petersburg, who was killed in Butovo, and St John of Shanghai and San Francisco. The three hierarchs are depicted next to the Church of the Resurrection of Christ in Butovo Square.

His Holiness Patriarch Kirill then addressed everyone present with a sermon.

Press Service of the Patriarch of Moscow and All Russia.