Provocations continue against the Sts. Cosmas and Damian Monastery in Kosovo 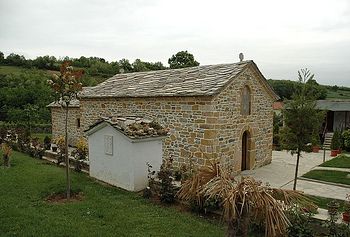 Provocations continue that began last Tuesday when group of Albanian boys threw stones at a monk of the St. Cosmas and Damian Monastery in Zociste, near Orahovac, in Kosovo. A special communication from the Department of External Relations of the Moscow Patriarchate was issued concerning that event.

Three days later, on May 18, at around 14:45, a Serbian laborer who was working on the restoration of the monastery had stones thrown at him by an Albanian youth. The man fortunately did not suffer any injuries. After throwing the stones, the boy ran to the neighboring village shouting “UChK” (the abbreviation for Kosovo Liberation Army) and “Kosovo Republic!”

The Serbian laborer did not want to report the incident for fear of provoking a larger scale attack from the Albanians, but for the sake of security the monastery reported this new provocation to the Kosovo police, whose responsibility it is to guard the monastery. The police investigated the location and reported the incident to the police department in Orahovac, which then sent a group of policemen to investigate the incident and question the witnesses.

There are two Kosovo police guards posted at the monastery’s entrance gates, but they are not able to monitor the entire complex, especially the side that faces Zociste, where most provocations occur.

The Sts. Cosmas and Damian Monastery was looted and destroyed by the KLA on September 13/14, 1999 during widespread ethnic cleansing by Albanians against Serbs in Kosovo.