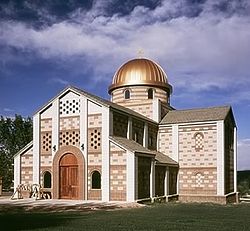 Members of Saints Constantine and Helen/Holy Theophany Church here are among those being evacuated as the Waldo Canyon Fire continues to spread.

Archpriest Anthony Karbo, rector of the parish, reported on Tuesday afternoon, June 26, 2012 that “the fire has moved into the city [of Colorado Springs] and is now about one mile from the church.” He added that “parishioners have been evacuated and homes have been lost.”

Established as a mission in 1974, the parish dedicated its imposing classic temple in 2002.

“We ask everyone to remember our faithful in their prayers, as well as those in other areas affected by the recent fires,” said Father Anthony. He added that the Glen Eyrie facility, at which the Diocese of the West has held several assemblies in recent years, also is in danger.

Additional information will be posted on the OCA web site as it is received.