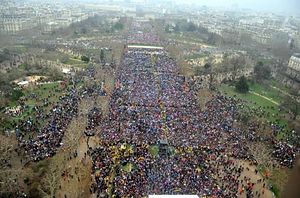 A million. And more. The turnout for this Sunday’s demonstration against French President François Hollande’s move to legalize same-sex “marriage” reached gigantic and even un-hoped for proportions.

Paris was covered with blue, white and pink flags marking grassroot France’s opposition to the unthinkable, as three apparently endless distinct marches converged at the foot of the Eiffel tower.

The triple itinerary was mandated by the Parisian police, and was seen by many as an attempt by the minister of the Interior to weaken the event visually by dividing its forces. It turned out to be a Godsend.

The first demonstrators started leaving the three departure points an hour before intended, at noon, but even so, the last marchers didn't start until 4 p.m. Thousands upon thousands of people slowly covered the three to four mile-long routes, stopping and going as if in a traffic jam because of their sheer numbers.

At half past two, the minister for Social affairs, Marisol Touraine, announced that the turnout was far less than the organizers had hoped. At 5 p.m. official figures were given out by the police: 340,000 participants. That was half their real count: unofficial sources from police headquarters say the “Préfecture” had actually counted 700,000, but had received orders to halve the figure.

However, according to some reports even the 700,000 estimate may have fallen far short of the mark.

The demonstrators kept streaming towards the gigantic Champ de Mars which can hold some 800,000 people, and which was filled to overflowing with a rotating crowd of demonstrators. Many left the march before its destination, discouraged by the melting snow that was falling by then or obliged to catch trains, planes or buses to resume work on Monday.

By 11 p.m. a number of officials at the Préfecture rebelled, according to unofficial sources, and reported estimates of as many as 1.2 to 1.4 million.

The French government has been doing its best to downplay the spectacular success of the “Manif pour tous.” Socialist party members and ministers have been repeating since Sunday that the proposition will not be scrapped, whatever happens.

The government’s official spokeswoman, Najat Vallaud-Belkacem, said it was “totally determined” to go on with its reform of marriage, calling it a “historical progress”. The minister for Justice, Christiane Taubira, accused the demonstrators of deliberately ignoring the language of the draft law that bears her name and said it would be sufficient to make its real wording known to the French to dissipate their concern.

President François Hollande’s spokesman also said that the draft law will be presented to the Parliament by the end of January. Socialist majorities both in the Senate and the National Assembly are expected to vote for the text, while a complete review of family law is to be presented in March. Among other things, this will include more widespread access to in vitro fertilization and other procreative techniques claimed by homosexual minorities.

But who were the million protesters who spent time, energy and money – in an economically depressed time– to come and say “no” to same-sex “marriage”?

Large numbers of elected town and village mayors and counselors - those who would have to celebrate same-sex “marriage” in the event of it being legalized - marched with their blue, red and white official scarves. There were also a number of opposition figureheads, including - strangely enough - Simone Veil, the author and promoter of the French abortion law in 1974.

If Frigide Barjot, the provocative self-appointed figurehead of Sunday’s march is to be believed, many of them were atheists, Jews, Protestants, leftwing voters, and homosexuals who are against gay “marriage.” Those were the only groups she greeted and thanked from the gigantic podium at the foot of the Eiffel tower.

However, Cardinal Vingt-Trois of Paris came to greet the marchers at Denfert-Rochereau. Cardinal Philippe Barbarin of Lyon also joined the march, condemning the “violence” of the law that would “change the meaning of a word”.

“This law is violently harming a nation. It will not mean progress for France,” he said.

Several bishops came – including Mgr Aillet from Bayonne and Mgr Centène from the south of Britanny – as well as countless priests and religious.

The majority of Sunday’s protesters were Catholics. Old and young, rich and poor, from every corner of France, rural areas and towns, they responded to calls from nearly every French bishop to voice their opposition to same-sex “marriage.” Many large families traveled far and long by car or bus. People who had never demonstrated in their lives discovered the joy of defending their faith and their ideals together.

However, organizers had made clear that any demonstration of faith would immediately be stifled: only approved banners and slogans were allowed.

Besides opposing same-sex “marriage,” one of the march’s more controversial objectives was, according to organizers, to fight “homophobia.”

Frigide Barjot, as well as several of the event’s homosexual spokespeople, publicly affirmed when talking to the media that they were in favor of a “civil union” for homosexuals that can be conducted in town halls just like marriages, and which would include all the rights and obligations of marriage except filiation. That is a minority view among opponents of same-sex “marriage,” however, and many are hoping for clarification in the coming weeks.

Last week the defeated UMP party of Nicolas Sarkozy’s introduced an amendment that would create a “civil union” aimed at the homosexual community.

This author joined a small group of demonstrators – a number of priests, Catholic journalists, a group dedicated to defending Christian’s rights (AGRIF), Christians converted from Islam, Oriental Christians and families – who decided to make their position clear on Sunday, wearing stickers that read: “For Christians, it’s NO to Taubira’s law, full stop.”

Volunteers for the march tried to make these demonstrators remove the unauthorized slogans, in vain. On Saturday evening, that same group had met with Brian Brown, the president of the U.S. organization National Organization for Marriage (NOM), who came over for the march.

Another march took place on Saturday at the call of Civitas, a civic association close to the Catholic traditionalist movement of the Fraternity of Saint Pius X, which was joined by a large number of the more traditional Catholic movements and associations. Its slogans were pro-life and pro-family (“La famille, c’est sacré” – “Family is sacred”) and more confrontational than those of the mainstream “Manif pour tous”, such as: “No to the decadence of society.”

One of Frigide Barjot’s main worries was to avoid confusion between the two marches. Civitas’s march was presented as “extremist” and accused of hate-mongering because of one slogan seen at its previous demonstration on November 18th when a radical right-wing group joined its ranks with a banner proclaiming “France needs children, not homosexuals.” This time round no such banners were shown.

Many joined the 40 or 50 thousand-strong group in order to mark their disagreement with the ambiguous stances adopted by some of the organizers of the “Manif pour tous.”

Civitas, however, would never have been able to put one million people on the streets of Paris. And that million represents a force that the government cannot pretend to ignore, even if it does minimize it with the help of most of the mainstream media.

Those million marchers have brought proof that same-sex “marriage” is very widely rejected, whatever the polls say, and that they have been seething to make themselves heard since the proposal to legalize it has been put forward. They have also shown the enduring influence of the Catholic Church in France, and particularly of its bishops, who have made their voices heard on the marriage issue after decades of laying low on moral issues in the public square.

Whatever the failings of the organizers of the “Manif pour tous”, they have allowed opposition to same-sex “marriage” to score a major victory. This reporter saw the tail end of the Denfert-Rochereau walking past on Sunday evening at 7:10 p.m, with still over half a mile to go before reaching the esplanade at the foot of the Eiffel Tower. Marchers were still shouting, waving flags, smiling, and dancing on the parade trucks accompanying their progress, oblivious of the long night’s travelling that awaited many of them.