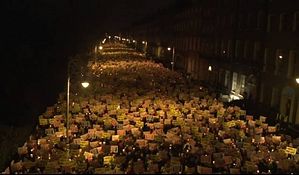 Tens of thousands thronged the streets of Dublin outside the country’s parliament on Friday night to demand that the Fine Gael/Labour coalition government keep a campaign promise to keep Ireland abortion-free. Demonstrators came from around the country for the vigil and rally, the highlight of which was a phone call to the Prime Minister’s office in which 30,000 people chorused, “Enda, Keep Your Promise.”

Dr. Eoghan de Faoite, a rally organiser, made the call on his mobile phone to Enda Kenney’s office, saying, “Hello an Taoiseach, this is the Vigil for Life, and I have 30,000 people here to give you a reminder of the pro-life promise you made in 2011.”

De Faoite said later, “The vigil has been a tremendously powerful and historic event, and the voice of the majority has been heard for the protection of both mother and baby.”

The rally in Merrion Square was organised by the country’s leading pro-life activist group Youth Defence in the face of apparent government determination to introduce legislation that would allow “limited” abortion.

Prime Minister Kenny told the national broadcaster RTE that he is being called “worse than Herod,” the Judean king in the Christmas story who ordered the massacre of the Innocents to protect his throne. But Kenny remains unapologetic, saying in the interview that he has a “duty” to “clarify” the law.

He denied again that his government intends to create abortion-on-demand, saying, “What I have a duty to do as the head of government is to see that we provide legal regulations in regard to the question of suicide, which is difficult.”

Kenny added that a meeting with the country’s leading Catholic bishops on the issue had been “very constructive and very realistic.”

Among the speakers at the rally was Mickey Harte, manager of the popular Tyrone football team, who told the crowd he was there as “an ordinary person, a citizen, a husband, a father.”

“I come from a sporting background, as you know, and I am proud of our sporting traditions. But there is no tradition of which I am prouder than the respect for both women and their unborn children that has been the hallmark of our medical services in Ireland. Ireland, without abortion, is one of the safest countries in the world for a woman to be pregnant.

“Like every country we have our faults and failings. But when it comes to life before birth, we have a value system, an ethos, which we should proudly share with the rest of the world. We should not undermine it at this time, or ever.”

The country’s crisis came to a boil in November when the media induced a global frenzy over the death of a young Indian woman living in Ireland who died of apparent complications of childbirth. Her husband went to the press claiming that she had requested an abortion and been refused and that it was Ireland’s pro-life law that killed her.

Abortion activists latched onto the incident and used it to push for the government to create legislation in response to the 2010 European Court of Human Rights decision in the A, B & C case. The case is related to the earlier X case in which the Irish Supreme Court ruled that a woman can legally have an abortion if she threatens suicide.

“We’ve reminded Fine Gael that abortion is not a treatment for suicide, and that the government needs to look at the evidence given before the Oireachtas Committee which confirms that fact,” vigil organizer de Faoite said.

Niamh Uí Bhriain of the Life Institute told the crowd, “You have come not in your thousands, but in your tens of thousands, from the rebel homes of Kerry to the hills of Donegal, from every county and every part of Ireland and in the rain and snow and bitter cold - to tell Fine Gael that we are the pro-life majority, and that we will not accept abortion, not now, not ever, not in our country and not in our name.”

“If the Government legislates for abortion on the basis of the X case, this legislation would cure no woman of suicidal ideation, but it would put some women's lives at risk.”

A pro-abortion counter-demonstration brought about 200, according to police.