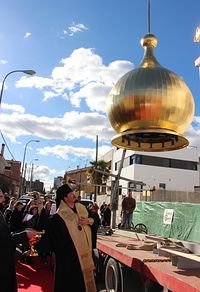 On February 7, 2013, Bishop Nestor of Chersonese blessed the first cupola and the cross for St. Mary Magdalene church under construction in Madrid, the website of the Diocese of Chersonese reports.

Present at the service were Russian Ambassador Yu, Korchagin, Grand Duchess Maria Vladimirovna, V. Yakunin, President of the Russian Rail-Ways company, V. Chernyshev, director of the Transsoyuz charity, and Carlos Palacio Oriol, president of the Spanish Talgo company, which has confirmed its readiness to support the construction of the church.

A Parish of St. Mary Magdalene was founded in 1761 in Madrid. It existed till 1882. In the post-war time, a domestic chapel dedicated to St. Empress Alexandra functioned in the house of the Russian imperial family.

In 2001, a Parish of the Nativity of Christ was founded there. Services were held at the former furniture production facility.

With the blessing of His Holiness Patriarch Kirill of Moscow and All Russia, a Foundation of the Nativity of Christ was registered with the Spanish Ministry of Culture. It was led by the rector of the parish, Rev. Andrey Kordochkin. The Board of Patrons included Archbishop Mark of Yegorievsk, head of the Moscow Patriarchate’s office for institutions abroad, Bishop Nestor of Chersonese and Grand Duchess Maria Vladimirovna, who lives in Madrid. 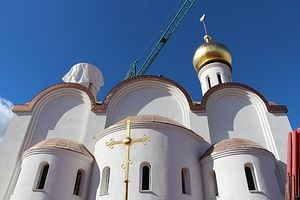 The official permission to build the church was granted on October 5, 2011.

In Autumn 2011, Archbishop Mark of Yegorievsk and Bishop Nestor of Chersonese blessed the foundation stone of the future church, and the construction work began.

In Autumn 2012, Patriarch Kirill gave his blessing upon the dedication of the new church to St. Mary Magdalene Equal-to-the-Apostles so that continuity could be restored with the parish that existed in the Spanish capital in the 19th century.

According to the official website of the Moscow Patriarchate, the construction work is expected to be completed in April 2013. In addition to the Church, the parish compound includes administration facilities, a refectory, classrooms for children and housing for the clergy.