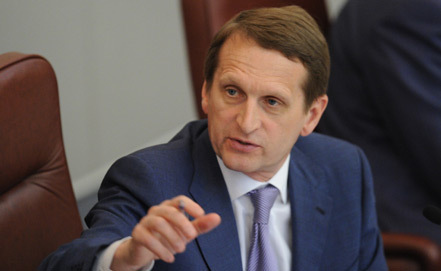 The chairman of the Russian State Duma Sergei Naryshkin stated that there is a need in our society for reinforcement of legislative protection of religious sentiments, and it is necessary to work out common rules for both believers and atheists.

"We live in a society where there are both believers and people who consider themselves atheists. It is our duty to work out rules, common for everyone, and to follow these rules," said S. Naryshkin, opening the meeting of the Council of Non-Parliamentary Parties in the State Duma.

On Monday, the Council is discussing the bill protecting the religious feelings of believers that was approved by the State Duma at the first reading on April 9.

"The society's need of reinforcement of legislative protection in this field is confirmed by sociologists as well," stressed S. Naryshkin. He referred to the information of the Russia Public Opinion Research Center, according to which 82% of Russian people support means of strengthening of responsibility for these actions

In his view, people have always argued and will argue on subjects of faith and religion, but desecration of shrines and religious objects has always been severely punished because this could cause acute social conflicts, including wars, reports Interfax.

"Today, neglect of religious sentiments of believers not only has a personal dimension, but it also infringes on serious social interests," stressed S. Naryshkin.