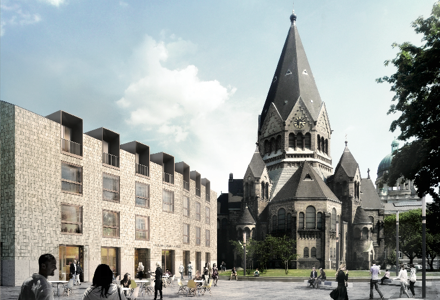 The building of the spiritual, cultural and educational center of the Patriarchate of Moscow has begun in Hamburg, reports Sedmitza.ru.

The ceremony of placing the first stone and in the foundation of the future center was presided over by Archbishop Mark of Yegorievsk, head of the Moscow Patriarchate's Administration for Institutions Abroad. The consuls general of Russia and the Ukraine in Hamburg, along with representatives of the senate and public organizations of the city were present at the event.

The parish of the Church of St. John of Kronstadt was founded in January 2001. At first the services were celebrated in a building that for 30 years was used by a Serbian Orthodox community.

In 2004, the Evangelical Church of Germany gave the Gnadenkirche Church in the city centre to the parish for a token payment of 1 euro. The community carried out extensive repairs on the building. The Church was adorned in the traditions of the Orthodox Church, the dome and golden Crosses were installed, and the iconostasis constructed.