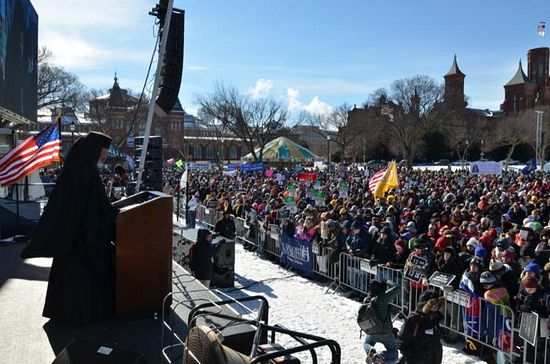 Thursday, January 22, 2015 marks the 42nd Anniversary of the Roe v. Wade decision that legalized abortion in the United States. Orthodox Christians from across the country will travel to the US Capital for the annual March for Life or participate in similar regional events.

His Beatitude, Metropolitan Tikhon, and His Grace, Bishop Michael of New York, will be among the Orthodox Christian hierarchs, clergy, seminarians and faithful participating in the annual March for Life in the US Capital on January 22. The rally on the DC Mall will begin at noon. Orthodox Christian marchers are asked to gather to the right of the stage under the iconic “Orthodox Christians for Life” banner and signs. At the conclusion of the pre-March program, participants will make their way to the US Supreme Court, where prayers for the victims of abortion will be offered.

Metropolitan Tikhon also will deliver the invocation at the Rose Banquet, slated to be held at the DC’s Downtown Renaissance Hotel. Pro-Life representatives from all 50 states and abroad are expected to be present. Rose Banquet reservations may be made no later than January 16 by contacting Archpriest John Kowalczyk at lmpm46@aol.com. General information on the DC March may be accessed at http://marchforlife.org/2015-details-press-release.

The Saint Ambrose Society at Saint Vladimir’s Seminary will be sponsoring a bus for those faithful in the New York City area who wish to participate. The bus will depart the seminary campus at 5:00 a.m. and return at approximately midnight. Cost is $20.00 per individual, and $30.00 for married couples and families.

The Sunday before the March—January 18—has been designated as “Right to Life Sunday.” A special archpastoral letter from Metropolitan Tikhon will be posted shortly on the OCA web site for distribution and public announcement in all parishes on that day.

In Chicago, His Grace, Bishop Paul will deliver the opening prayer at the 10th Anniversary “March For Life Chicago” on Sunday, January 18 at 2:00 p.m. His Grace, Bishop Anthony, Auxiliary of the Diocese of Toledo and the Midwest of the Antiochian Orthodox Christian Archdiocese of North America, also will be present and is slated to address an anticipated 3,000 marchers from Illinois, Wisconsin and Indiana. Orthodox Christian marchers should gather at Federal Plaza, 50 West Adams, Chicago. After opening presentations by a number of noted religious and civic leaders, including Roman Catholic Archbishop Blasé Cupich, they will make their way to the James R. Thompson Center, 100 West Randolph, where the program will conclude at 4:00 p.m.

Cleveland area faithful will be joining ZOE for Life, the region’s Orthodox Christian Pro-Life organization, for a one-day bus trip to the DC March. The bus will depart from ZOE House next to Saint Vladimir’s Church, 5913 State Road, Parma, OH, at 4:00 a.m. on Thursday morning, January 22, with an anticipated return time of midnight. Food and beverages will be provided on the bus. The cost is only $30.00 per person. For additional information or to reserve a seat on the bus, please call Kathy Kovalak at 440-842-6639.

Additional information on the Orthodox Christian presence at these and similar events will be made available as it is received. 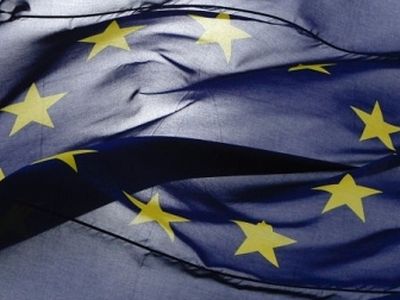 EU pro-life petition surpasses 1.8 million signatures The One of Us pro-life group's petition states that "the EU should establish a ban and end the financing of activities which presuppose the destruction of human embryos". 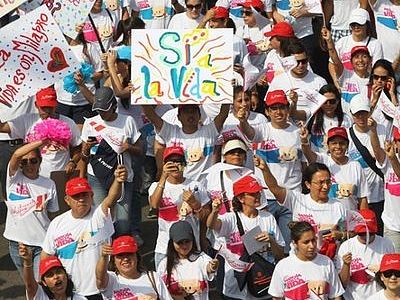 250,000 people take part in rally against abortions in the capital of Peru

250,000 people take part in rally against abortions in the capital of Peru This information was given by the organizers of the demonstration, called "a pro-life march", which took place under the leadership of the Archbishop of the Peruvian capital and with participation of various public groups, who are opposing abortions. 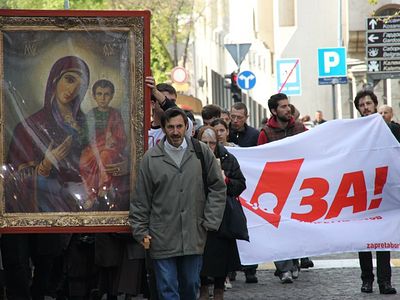