Symbolism in the Star of Bethlehem 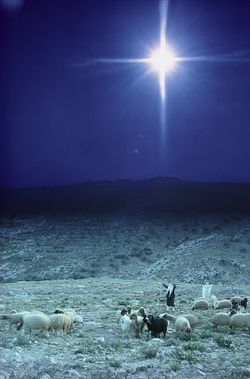 Much has been written about the astronomical possibilities of the Christmas Star, even the astrological signs, but could the Star of Bethlehem be an angel?

Miracles are unexplainable events at the time of occurrence. For many, miracles are basic beliefs which can bolster or try one’s faith. Many such miracles make up a part of the Christmas traditions. These traditions may mean different things to different people, actual events, miracles, or symbols .

For the Christian, one of the great wonders of Christmas is the star that appeared around the time of the birth of Jesus. This star of Bethlehem traditionally led the Wise Men from the East , also known as the Magi, to the site of the birth of Jesus. According to scripture (Matthew 2:7–10) this star preceded the Wise Men on their journey until it came and stood over where the young child was.

But was this heavenly object which led the Magi and stood over the place of the Christ Child an astronomical object or a supernatural object—a star or an angel?

Prophecy of the Star

The Star Prophecy from the Old Testament (Numbers 24:17) was used by radical and revolutionary Jews from 70 B.C.E., to stir and comfort with the foretelling of the “Star of Jacob,” which was interpreted by some theologians as the coming of a Messiah: I see Him, but not now; / I behold Him, but not near; A Star / shall come out of Jacob; / A Scepter shall rise out of Israel, / And batter the brow of Moab, / And destroy all the sons of tumult.

The Star of Bethlehem has been seen by many Christians as a miraculous symbol of the birth of Jesus, but there are also those who see it as an actual astronomical event—a nova, comet or a special conjunction that occurred at the time of the foretold birth. A conclusion about such an event has yet to be reached by most astronomers.

The ancients—the Greeks, Romans and even the Hebrews--believed that astronomical phenomena heralded actual events on earth, such as the birth of important rulers and heroes.

Origen in the 3rd century C.E. argued for a naturalistic explanation of the Star of Bethlehem. John Chrysostom, a century later, viewed the star quite differently, as one of many miracles occurring at the birth when he said:

"How then, tell me, did the star point out a spot so confined, just the space of a manger and shed, unless it left that height and came down, and stood over the very head of the young child? And at this the evangelist was hinting when he said, "Lo, the star went before them, till it came and stood over where the young Child was."

The Star as an Astronomical Object

There have been many theories in modern times about an astronomical or astrological occurrence at the time of the birth of Jesus, but many of these conjunctions, novas, comets, pulsars, double eclipses or supernovas at the appropriate range of time would not have been sufficiently bright to the naked eye to match the scriptural verses.

The Star in Eastern Orthodoxy

According to the Eastern Orthodox Church and others, the Star of Bethlehem which led the Magi was not an astronomical event, but it was rather a supernatural being--an angel . This angel was sent by God to lead the Magi to the Christ Child and the world to the dawn of a new light of knowledge, as seen in the Troparion of the Nativity: Your birth, O Christ our God, / dawned the light of knowledge upon the earth. / For by Your birth those who adored stars / were taught by a star / to worship You, the Sun of Justice, / and to know You, Orient from on High. / O Lord, glory to You.