A Meditation on the Canon of St. Andrew 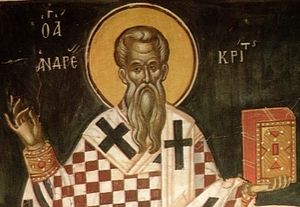 The Canon of St. Andrew is interwoven with two complementary strands. There is first the historical strand, in which St. Andrew skillfully uses the history of salvation as the foundation for his hymn of repentance. It is the loving and compassionate God, who reveals himself through his saving acts and who calls the listener to repentance. It is the triune and tripersonal God who reveals to the listener that the work of salvation continues here and now. Indeed, the Lord himself reminds those who accuse him of breaking the law for healing on the Sabbath that “My Father is working still, and I am working.” (John 5:17). This ongoing work of God forms the second strand of the canon which calls us to personal repentance and to acknowledge how we stand and respond to God’s healing activity.

These complementary strands in the Canon of St. Andrew remind us that Christians are called to be ascetics. Our baptism, our participation in the death and resurrection of Christ, makes us citizens of the Kingdom and strangers to sin and corruption. St. Paul teaches us that since we are participants in the Passover of the Lord, we are not to allow sin to reign in our mortal bodies. “Do not yield your members to sin as instruments of wickedness, but yield yourself to God as men who have been brought from death to life, and your members to God as instruments of righteousness. For sin will have no dominion over you, since you are not under the law but under grace.” (Rom. 6:12:14).

Through baptism, we are under grace, we have passed from death to life and therefore have become strangers to a world that rejects the overture of divine love. Yet who can deny the reality and temptation of sin? Yes, in baptism we have died to sin! (Rom. 6:11). But as St. Paul recognized, he did not do what he wanted, and sought after the very things he hated. The law of sin waged spiritual warfare against the law of grace. The law of sin continued in his members seeking to overcome the gift of new life.

Because St. Paul was aware of his own sin, he was able to recognize the fragmentation or disintegration of his own person. He recognized that the Paul who sinned was a caricature, a distorted image of the Paul bathed in the grace of baptism. “For I do not do the good that I want, but the evil I do not want is what I do.” (Rom. 7:19)

One can notice that the struggle described by St. Paul is the same struggle described in the Canon of St. Andrew. As the history of salvation unfolds through the troparia of the canon, we also are confronted with the distorted self, the self that has subordinated spirit to flesh because of a misguided will. Consequently, the passions, which are linked to our nature, become misdirected and twisted. Like the struggling apostle, the canon expresses the shocking self-discovery of its author, “…I am convicted by the verdict of my own conscience, which is more compelling than all else in the world.” (Ode 4).

The call to asceticism is the call to the true self which struggles to submit the flesh to the spirit. It is the ordeal which purifies the passions by allowing the gift of grace to guide and nurture the will. The call to asceticism places us on the path of transfigured life that has already been opened for us by the Lord’s great and holy Pascha.

When the passions are purified, when human nature and human will are in harmony with the divine will, the true self emerges as it develops according to the law of grace. St. Anthony of Egypt describes the wholeness or integration of the human person in this way: “What takes place according to nature is not sinful; sin always involves man’s deliberate choice. It is not a sin to eat; it is a sin to eat without gratitude, and not in an orderly and restrained manner such as will enable the body to be kept alive without inducing evil thought. It is not a sin to use one’s eyes with purity; it is a sin to look with envy, arrogance, and insatiable desire. It is a sin to listen not peacefully, but in anger; it is a sin to guide the tongue, not towards thanksgiving and prayer, but towards back biting; it is a sin to employ the hands, not for acts of compassion, but for murders and robberies. And thus every part of the body sins when by man’s own choice it performs not good but evil acts, contrary to God’s will.”

The ascetical life should be our repentant response to God’s love. Through this response, the icon of the true self will radiate with the uncreated light. Through the ascetical struggle the flesh will be transformed into the temple of the living God. This is the joyous news of the canon as it unites us to the great acts of God culminating in the Savior’s death and resurrection.