A first: Great blessing of the waters in the River Ill, Strasbourg 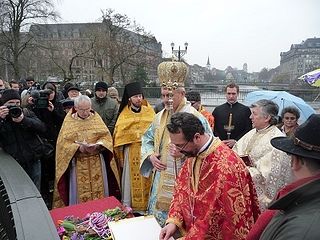 "We conducted the Great Blessing of the waters later than church canons teach us, as circumstances allowed. Nevertheless, it's important for us to bless water at the beginning of the year, for thus we recall God's blessing on all Lord's creatures," Metropolitan Emmanuel of France (the Constantinople Patriarchate) said as he headed a procession with cross to the river and its consecration.

The waters of the Ill were blessed in Strasbourg for the first time, and a permission of city authorities was required to carry it out.

The ceremony was held after the Liturgy celebrated in the St. Paul Church by representatives of the Russian, Georgian, Romanian and Constantinople Churches.

About 300 people attended the service, celebrated in Greek, Church Slavonic, Georgian, Romanian and French, the representation of the Russian Church in Strasbourg reports on its website.