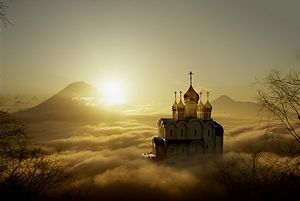 The Holy Trinity Cathedral, Petropavlovsk-Kamchatsky, built on donations from parishioners, was robbed and burned on the night of January 28.
Police are searching for the criminals who conducted a pogrom and committed arson in the Holy Trinity Cathedral in Petropavlovsk-Kamchatka last Saturday night, reports Interfax. At the current time, the scope of the damage is still being estimated and the incident investigated, the press service of the Kamchatka police force communicated on Monday.

The police have appealed to local citizens who may have seen suspicious people near the church on the night of the incident, to help solve the crime.

Local diocesan representatives have related the details of the incident to Interfax. “It all happened on the night of January 28. One or several people broke into the church. The icon of St. Nicholas was defaced, and the glass of the inner door of the church was shattered,” said the representative. In his words, the criminals broke into the cash box in the church’s candle and icon store, but found no money there. Leaving the scene of the crime, the thieves set fire to the cathedral. “The church guards sounded the alarm after walking around the territory and smelling the smoke. The priests of the cathedral were called to the church, and firefighters arrived speedily. Glory be to God, they were able to put out the fire”, said the diocesan representative.

A representative for the government agency for emergency situations informed Interfax that the fire caused damage to the cathedral’s wooden structure and church utensils within three meters, and that an area of 40 cubic meters was blackened.

The Russian Orthodox Church has called for a diligent investigation into the robbery.

“The criminals are not yet known, but we hope that they will be found and their names made widely know. Society should know its “antiheroes”—those who lift their hands against sacred things”, announced the chairman of the Synodal information department, Vladimir Legoida.

In his words, such crimes as the desecration of holy places, “must be investigated with particular diligence and brought out for public judgment.”

“The damage done by a pogrom in a church cannot be compared to the robbery of a supermarket. Here, a blow is dealt not to the interests of a private owner, but to the valuable property of all society. Such incidents are a direct challenge aimed at a huge number of our country’s inhabitants who call themselves Orthodox,” noted the representative of the Moscow Patriarchate.

The desecration of churches, Mr. Legoida considers, “must not leave people indifferent who consider themselves members of the Orthodox Church.

“Today we live in a changing world: only during this past winter we have witnessed three robberies of churches in the Peterpavlovsk-Kamchatka diocese,” writes the Cathedral’s rector, Fr. Alexei Apatov on the website Orthodox Kamchatka. “Twice in the north, and now in the cathedral church. The crimes are quickly solved; the financial and material loss is minimal, however… Let us thank God that He has preserved the churches of our peninsula and pray for those people who from evil suggestion have transgressed the furthermost boundaries of their own consciences. Under any circumstances, every person always has a chance to look over his life, his deeds, to cease them and change, to repent.”

The Holy Trinity Cathedral is located on one of the highest points in the city, from which the panorama of the stunning natural beauty of Kamchatka can be seen: snow-topped volcanoes and hills, with the wide ocean between them.

Construction of the cathedral began in September of 2001, and was finished in September of 2010, when the church was consecrated by Patriarch Kirill of Moscow and All Russia. Around 50 million rubles (1.6 million USD) of private donations were used to build it.