Icon of the myrrh-bearing woman

The Sunday of the myrrh bearing women, or ointment-bearing women, is that of the second Sunday after Easter in the Orthodox Church. A group of women accompanied Christ and some ministered to Him out of their own resources. On the morning of the third day after His death they came to the tomb bearing ointments they had prepared to embalm His body. Hence they are called the Ointment-bearing women or Myrrh-bearing women. In the scriptures seven are known by name: Mary Magadalen; Mary the mother of James and wife of Clephas; Joanna, the wife of Chusa, who was steward to Herod Antipas; Salome, the mother of the sons of Zebedee; Suzanna; and Martha and Mary, the sisters of Lazarus.

This icon is a straightforward representation of the Gospel account. We usually see two women bringing their prepared ointments in flasks and an angel, dressed in white sitting on the stone or stone slab at the entrance to the tomb, and pointing to the empty white linen shroud in the tomb and proclaiming the resurrection.

A short history of this iconic representation 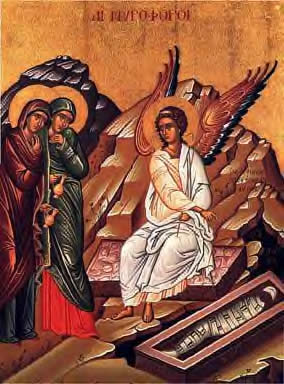 Icon of the Myrrh-Bearing Woman
Until the seventh century this was probably the most popular iconocraphic allusion to the resurrection. Its first surviving occurrence was found in the early third century baptistery of the house of Dura Europas. During the course of the seventh century, the icon of the ointment-bearing women at the sepulchure gave way to the image of the victorious Christ harrowing hell and raising Adam and Eve. It also came to be embodied in the developed narrative iconographic sequence of the Passion images, following the deposition and entombment.

An introduction to the feeling of the women

An introduction the feeling of the women as they approach the tomb is found in one of the hymns:

The women bringing spices came to your tomb, O Christ, saw its seals but did not find your undefiled body. Lamenting they made anxious haste and said: "Who has taken our hope away? Who has taken Him dead, naked and anointed, His mother's only consolation? Oh how was He slain, who raised the dead? He who despoiled hell, who was he buried. But rise from the dead Saviour, by your own power, on the third day as you said, and save us."

They were startled and seized with terror and intended to flee. But the young man said to them: "Do not be afraid"

In yet another place:

"The holy women carried myrrh to Your tomb with fervour and their souls rejoiced at the sight of a radiant angel.”

Some of the themes occurring in the texts

There are a number of themes to be found in the poetic hymns used in Vespers, Matins and Lauds on this day. A number are reflections on the womens' reactions on encountering the angel at the tomb and the assurance that Christ is risen. Also quite a few hymns contemplate the angel speaking to the women and exhorting them to announce the good news of Christ's resurrection to the disciples.

The encounter with the angel

When early in the morning the ointment-bearing women stood before the tomb of the Giver of Life, they saw an angel sitting on the stone. He spoke to them saying: "Why do you seek the living One among the dead? Why do you mourn as if the incorruptible One has suffered corruption? Go to the disciples and proclaim the glad tidings!"

"O ointment-bearing women why have you come to the tomb? Why do you seek the living among the dead? Take courage for the Lord has risen!" Thus spoke the radiant angel.

"Why do you weep as you seek the living One among the dead, since He is Almighty and gives life and immortality, light and great mercy to all."

"Why do you mingle tears with your ointments? The stone has been rolled away, the tomb is empty. Behold corruption has been trampled down by life! Behold the grave seals bear a radiant witness! The guards sleep. All the dead are saved by God. Hades is in mourning! Hasten! With joy, go to the Apostles and tell them: "Christ the firstborn from the dead, He has caused death to die, shall go before you into Galilee."

Behold an angel, bright as lightening, spoke to the women and said: "Why do you seek the living One among the dead, since He is Almighty and grants life and immortality, light and great mercy to all."

A radiant angel, dazzling in beauty, said to the ointment-bearing women "Why are you seeking the living One among the dead? He is risen and has left the tomb empty. Understand that the immutable One has changed corruption into incorruption, and say to God: “How immutable are your works, O God, for you have saved the Human race.”

Run to tell the disciples

The news is so awesome and great that the angel reassures the women not to be afraid but RUN to tell the disciples the good news:

"Do not be afraid! The One you are seeking has risen! Come and see the place where the body of Jesus lay! Run to to tell the disciples. Tell them: 'The Saviour has risen from the tomb!' ...Do not be afraid!"

He is the source of Life, the Lord of Life! Do not be afraid O friends of God!" The Lord reigns and grants great mercy to the world.

And the ointment-bearing women are told in the hymn:

"Come back from what you have seen, O women, herald of good tidings. Say to Sion: 'Accept from us the joyful announcement of the resurrection of Christ! O Jerusalem rejoice, exult and leap for joy! For you have seen Christ the King, coming out of the tomb as a fair bridegroom."

“Shine, shine, O new Jerusalem, for the glory of the Lord has shone upon you. Rejoice and be glad, O Sion, and you, O pure one, O mother of God, exult in the resurrection of your Son."

So the Sunday of the myrrh-bearing or ointment-bearing women gives further reflection to the joyful Easter message, the heart of the Christian belief that is sung over and again during the Easter season:

"Christ is risen from the dead! He has crushed death by His death. He has bestowed life to those who lay in the tomb."

Yes, He is truly risen!