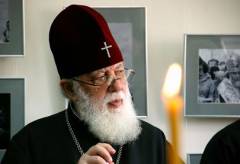 Patriarch Illia II.
The Patriarch of the Georgian Orthodox Church has been credited with helping raise the birth rate in the former Soviet nation of Georgia.

Patriarch Ilia II came up with an astonishingly successful incentive to counteract the country’s plummeting birth rate by promising to become the godfather of all babies born into Orthodox Christian families who already have two or more children. Since he began fulfilling his promise with the mass baptisms in 2008, he has gained nearly 11,000 godchildren.

Georgian President Mikhail Saakashvili publicly stated that the patriarch deserves much of the credit for the rising birth rate, which was 25 percent higher in 2010 than in 2005, and which Saakashvili said is helping the government achieve its five year plan of increasing the aging nation’s population from 4.5 million to 5 million by 2015.

While Georgia was under the domination of the former Soviet Union, the Orthodox religion was all but suppressed in the country. But now, according to the (http://patriarch.ge/eng) Patriarch Foundation, a movement set up to promote the interests of the Church, the Orthodox Church and clergy play a very influential role in Georgian society, with many seeing the patriarch as the most authoritative figure in their lives.

“Faith is getting stronger,” said spokesman Irakli Kadagishvili. “The patriarch is seen not only as a religious figure, but also as a national authority. When he saw the need to increase the birth rate he only had to provide an incentive. It was the only stimulus most parents needed if they were already thinking about having more children.”

Lamara Georgadze, whose fourth child was recently baptized by Patriarch Ilia II, said she and her husband answered the patriarch’s call to have more children.

“The Holy Father reminded us all of the importance of increasing the birth rate,” she said in an AP report that described the 400 baptisms presided over by Patriarch Ilia II in a Tbilisi cathedral on May 6. “There are too few of us Georgians and therefore this is very important.”

“This is a wonderful day for my family,” said Tamar Kapanadze, a 33-year-old father of four. “Our fourth son, Lashko, was baptized by the patriarch himself, and before this he baptized our daughter Liziko. This is why we decided to have a fourth child.”

The Georgian government announced earlier this year that parents would be given a one-time payment of 1000 Georgian Lari (about $600) for a third child and double that amount for a fourth child.

“This will help raise the birth rate,” Saakashvili said. “The patriarch has already taken steps in this direction. We should be thankful to him for continually reminding the Georgian people that we should multiply.”

Government statistics indicate that the number of abortions has also declined by nearly 50 percent between 2005 and 2010.