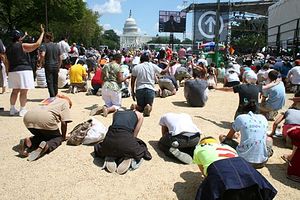 Tens of thousands of people kneel in prayer at TheCall DC on the National Mall, Saturday, Aug. 16, 2008.
With eyes closed and bodies swaying to the sound of Christian rock music, the crowd gathered at the California State Capitol building Saturday appeared entranced in another world as they invoked the name of God to save the state and the nation.

Christian leaders who took the stage at The Call Sacramento event repeatedly sounded the alarm on the destructive path that they say America is heading down and highlighted the need for Christians to rise up and pray for God to turn the country back to Him.

The problems of abortion, the ruling on California’s voter-approved marriage definition, and addictions cannot be solely blamed on the government, said the speakers. But individual Christians should repent and pray God will change the hearts of men and women.

“The government is the people. And the people is a reflection of the Church,” said Lou Engle, founder of TheCall, during the rally. “The problem is not the government; it is the church.

“If my people would humble themselves and pray, [then] the church gains authority and begins to win the battle,” he said, alluding to 2 Chronicles 7:14 in the Bible.

For 12 hours on Saturday, participants of TheCall Sacramento fasted and prayed in front of California’s state capitol building in repentance and for a national revival.

Bishop Harry Jackson, who led the opposition against D.C.’s gay marriage law, prayed for President Obama to have a “Damascus” experience, referring to the conversion Apostle Paul experienced on his way to Damascus to persecute Christians.

Engle called on the rally participants to pray for members of Congress and for God to raise up righteous leaders who are humble, care for the poor, defend the life of the unborn, and traditional marriage.

“The ‘60s is termed the generation gap. We are 40 years into a great separation, really a rebellion from the heart and foundation of our forefathers,” said Engle. “We are right now at the end of that 40-year cycle and today we want to believe that God can do something and the rebellion can end.”

TheCall events are inspired by the story in Joel 2, which prescribes for people to gather to fast and pray in times of crisis.

The first such event occurred during the election year of 2000, when George W. Bush was elected president. Engle said he felt compelled to hold the prayer and fasting event because of the impact that the elected president will have on the issues of abortion, marriage, and other foundational moral principle.

Some 400,000 people, mostly young adults, participated in the first TheCall event at The National Mall in Washington, D.C. in 2000.

Other similar events have been held across the country and around the world.

Now ten years later, “the stakes couldn’t be higher,” commented leaders of The Call on the movement’s website.

“This is the time for a great spiritual outpouring to be unleashed to meet the demand of these times,” they added for the Sacramento event. “Can California be changed? Can a nation be changed? Yes, but only if they are altar-ed!”

Bulgarian Orthodox Church to Hold Rally for Religion in Schools 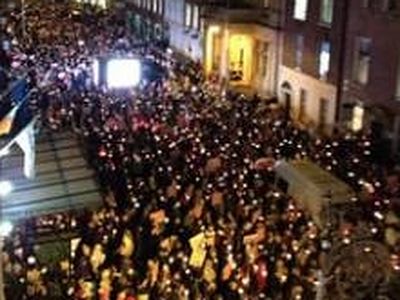 10,000 pro-lifers rally in Dublin amidst heated abortion debate Over 10,000 gathered outside Ireland’s parliament this week to demand that Prime Minister Enda Kenny keep his campaign promise of 2011 not to bring legalized abortion into the Republic. 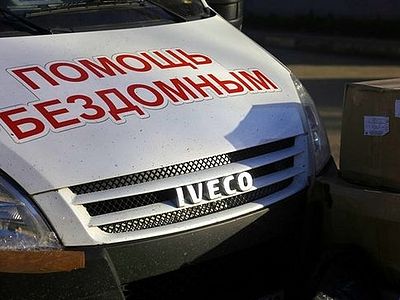