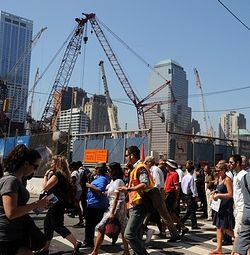 Costas Bej/TNH. On the nine-year anniversary of the fateful day of September 11, 2001, many Greek Americans recount their memories, and count their blessings, but the fate of the St. Nicholas Church at ground zero, destroyed during the attacks, remains up in the air.
NEW YORK – On the sunny, beautiful morning of Sept. 11, 2001, John Costalas served a lot of breakfasts at his popular Essex House restaurant, where customers came early. Ten of them never came back, Port Authority workers who died in the terrorist attacks at the World Trade Center a short while later. “They had breakfast here. Seven o’clock in the morning,” he said, pointing to their pictures on the wall where his eatery’s walls are a shrine of former customers who’ve passed away.

Costalas has another link to that day, sharing it with many Greek Americans and those who said that they – like he – enjoyed going to St. Nicholas’ Greek Orthodox Church, just down the street from his restaurant. The church was felled that day when collapsing buildings landed on it. Costalas is one of many of the churchgoers who said they will never forget that day, or their church, as they planned to meet for a blessing on Sept. 11 this year at Manhattan’s Ground Zero, a day loaded with memories, but also hope for renewal, and perhaps even rebuilding the church, whose officials are embroiled in a bitter dispute with the New York and New Jersey Port Authority over how much funding is needed to bring it back. 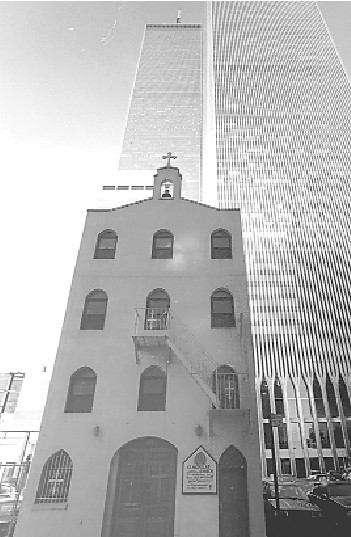 St. Nicholas Greek Orthodox Church stood in the shadow of the World Trade Center’s Twin Towers until being felled when Tower 2 collapsed after the terrorist attacks on Sept. 11, 2001.
The National Herald spoke to the leadership and parishioners of the destroyed church ahead of the occasion, and they shared their feelings, which are still vibrant and sharp. At his shipping company’s office in Stamford, Connecticut, new parish President John Couloucoundis explained that it was nautical patron saint St. Nicholas that drew his family to the church. “St. Nicholas is very important to shipping people – and very convenient when it’s just up the road from your office.” Warm is the word parishioners most often use in describing the church. Some gather for a liturgy at St. Constantine and Helen church in Brooklyn, by St. Nicholas’ long-time pastor Fr. John Romas. “It was just like walking into a Greek monastery,” said one woman. Her daughter added: “The inside was just so homey and so warm.” With its relics (kept in a safe) of St. Nicholas, Savvas and Catherine and many old icons, the church was “almost a museum,” said Couloucoundis. “Outside it was a very plain building,” he recalled. “But inside it was very historical and very spiritual.” There were functions on the second floor. Couloucoundis said a December 6 church celebration always drew “everyone involved in shipping in New York.” As St. Nicholas’ neighborhood shifted from the immigrant to the commercial, he added, the community’s ties to the church remained. “They might have moved to Brooklyn, to New Jersey, to Westchester, they had this very strong tie to this church.”

Previous parish president John Pitsikalis’ grandfather Stamatis Kalamaridis founded St. Nicholas in the lobby of his hotel, “where the Deutsche Bank stood,” hiring a priest in 1915 to conduct services for young men at the hotel before they headed West for work. Like many parishioners, Holy Week was always spent at St. Nicholas.

Back in 1972, St. Nicholas member Vasiliki Smyrli recalled, membership was very low –with only 18 red eggs needed at Easter. However, the woman who devoted many hours to the Philoptochos and tending to the church, ended up bringing “all of Brooklyn there.” Panagiotis Hatzidoukas said he started going to the church 40 years ago. He had a church in New Jersey, but started going to St. Nicholas, “because it had something that drew everyone to it. It was like a big family.” He said liked that outsiders felt welcome. Pitsikalis, as a federal Treasury Agent, would often take off Wednesday afternoons to greet people of all faiths and “just let them sit there and meditate.” Parishioners noted that their church had recently undergone a $370,000 renovation before that destructive day. Images of Greek Independence heroes decorating the church were a memorable touch for New Rochelle resident and St. Nicholas parish member Katina Nalbantian, who said she appreciated the spiritual guidance of Fr. Papachristou and Fr. Romas. 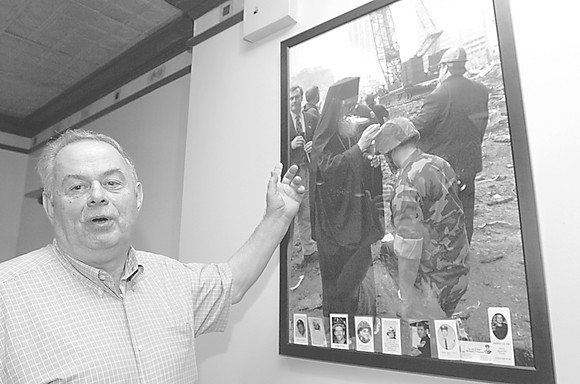 John Costalas, owner of the Essex House near Ground Zero and St. Nicholas’ Church in New York City, has photo reminders of the day of the Sept. 11, 2001 terrorist attacks.
“The church was literally priceless” to the community, Couloucoundis said, pointing out that the Milstein family of developers tried to purchase the land to build an office building in the 1990’s. Despite offers of millions, the community wouldn’t sell.

Besides the loss of some of his customers, Costalas remembers how he would often provide food, including bean soup, for holidays, for the church. The simplicity of the church kept him connected; its priest and parish leader (then James Maniatis) offered solace when he lost his parents. Fr. Romas, who led the St. Nicholas flock for 27 years, followed in his father-in-law Fr. Papachristou’s footsteps. He recalled the tour buses, the Sunday and Wednesday services, epiphany services in Battery Park and even celebrities such as the late actor Telly Savalas stopping by. “Anybody who went down there felt like a home ... They came down there to get an injection.”

On September 11, 2001, a caretaker at the church “ran out of the church about 10 minutes before Tower Two fell down on the church,” said Couloucoundis. Only seven artifacts were saved because the man, “literally ran for his life.” Fr. Romas recalled two caretakers. “This isn’t April 1st,” he said at first, when someone called him about the plane hitting the first tower. Unable to get to the site until a few days later, he said: “I went to the corner. I see my church – 20 feet of iron on top of it. Then I kneeled down and started crying. I said, ‘St. Nicholas we are going to build you back here.’” It was the telephone line that led them to the leveled church’s site.

Reduced to tears remembering that day, Vasiliki Smyrli recalled that, “Our heart broke ... Today, when I go down there, I want to weep.” A young parishioner, who was a flight attendant who was supposed to report for work that afternoon, said she was “completely distraught, distraught, anything you can think of.” She said she always thought St. Nicholas would be part of her life. “Any event that would be meaningful I wanted to take place there. And I felt that that part of my life was taken away,” she said. Couloucoundis noted that one of the plane’s landing gear landed 20 feet in front of the church, before the second tower destroyed it. He was in Atlanta, Georgia, when the terrorist attacks took place. “It took me literally about a week to find out what exactly happened,” he said. 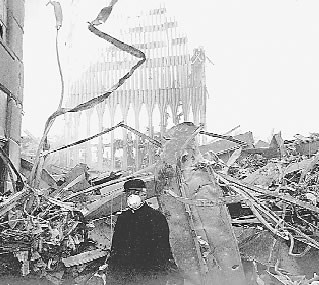 Fr. John Romas, pastor of St. Nicholas, stands by the ruins of the church shortly after the terrorist attacks of September 11.
Pitsikalis said, “I didn’t think anything was going to happen to the church. The only thing I was concerned about at the time was the real crisis at the time was people dying.” He added: “The tragedy of that day was the human loss. Not a building.” Still, he said he mourns the loss of both the community’s Bible and records. The disaster led him to move from Battery Park to Brooklyn Heights.

“We all cried and screamed, because we didn’t know what was happening,” notes another parishioner, adding: “We all thought of all those people that were working there.” She stopped her husband from going to the site. Past parish board member Hatzidoukas was among the group that went with Fr. Romas and Archbishop Demetrios to visit the destroyed church. “The great miracle,” for Hatzidoukas, was the recovery of an icon of St. Spyridon. “The silver around the icon had melted, but the paper icon had not been burnt.”

Despite talks about St. Nicholas’ rebuilding recently being put on ice, the community hasn’t lost faith. Their sense of purpose is clear. For Couloucoundis, a bigger church would help meet the “sense of loss” found at Ground Zero. He thinks a new St. Nicholas will offer perhaps thousands of daily visitors “an outlet for the pain” and a clear example of resurrection. For the same reason, past president Pitsikalis notes: “It would be great to have our church back, bigger than ever” for the same reason. Couloucoundis vows: “The bureaucrats will not get in the way. This will happen ... one way or another, it’s going to get built.”

One parishioner declared she’s tired of the community being scattered: “I personally don’t care how big or small it is, as long as St. Nicholas is rebuilt.” Some parishioners voiced fears of future attacks, while others say they see spiritual signs. Nalbantian notes, “We want to see St. Nicholas be rebuilt, and I believe that St. Nicholas has the strength to do that. He’s given his signs.” Fr. Romas said he considers it a miracle that after the epiphany celebration, when the dove was released in January 2009, “four days later, a plane with 156 people landed on the river.” He calls the famous Hudson water landing a St. Nicholas miracle, believing, “The water was blessed.”

Parishioner Vasiliki Smyrli said she cannot wait for the rebirth. “We want our church small, and like it was. We’d like to live to see it, but -” she adds with a good-natured laugh, “We won’t live to see it, but anyway. Whoever passes by, will light a candle and say, ‘God forgive them.’” 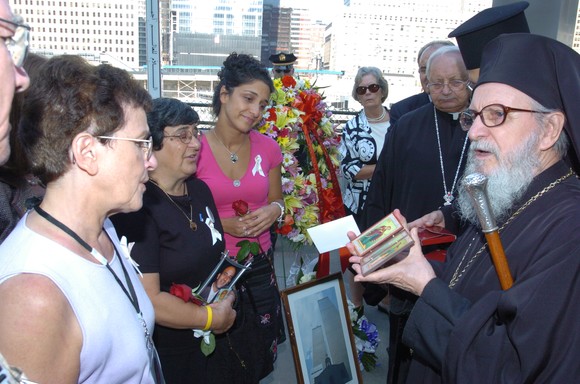 Costas Bej/TNH
Costalas said, “It will be unbelievable to see the church rebuilt,” underlining his preference for the proposed Greenwich and Liberty streets plot. There’s reason for his faith. One of his clients was John McLoughlin, a Port Authority police officer trapped in the rubble of the falling World Trade Center, portrayed by actor Nicolas Gage in the movie World Trade Center. McLoughlin, badly injured, was rescued 22 hours later, one of he few survivors of the catastrophe that killed nearly 3,000 people. That’s what they call a miracle at St. Nicholas.’

Moscow believers pray for victims of 9/11

Moscow believers pray for victims of 9/11 Last Saturday, clerics of the Moscow St. Catherine Church, where the Representation of the Orthodox Church in America is located, conducted a requiem for victims of terrorist attacks in New York on September 11. 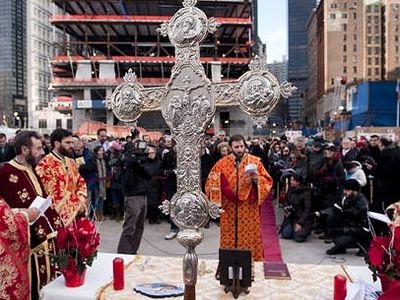 Feast of St. Nicholas (new style calender) celebrated at Ground Zero Vespers, marking the Feast of Saint Nicholas, was celebrated on Sunday, December 5, 2010, at the site of Saint Nicholas Greek Orthodox Church here, despite the fact that the church -- the only house of worship destroyed in the 9/11 terrorist attacks on the World Trade Center -- has yet to be rebuilt. 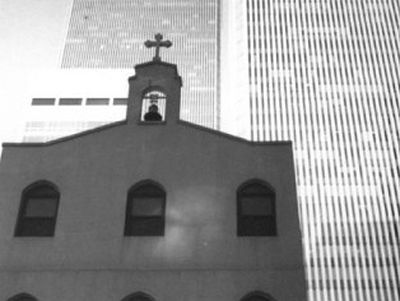