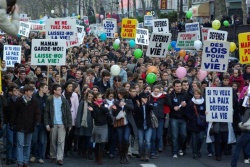 France: thousands plan to March for Life | March for Life, France
The seventh annual March for Life in France will take place in Paris this Sunday January 23 at 2.30pm. The march will begin at the Place de la République. On the previous evening, Saturday January 22, a prayer vigil is taking place at 8.30 pm in Saint Francis Xavier Church, Place du Président Mithouard (7th district), Paris.

The event has grown in size from year to year since it was first held. The 2010 March was a huge success. Attendances at past marches have reached between 15,000 to 20,000 peaceful participants, many of whom are young people under the age of 25.

Delegations from other European countries usually attend and the organisers once again expect that there will be a significant attendance from across Europe.