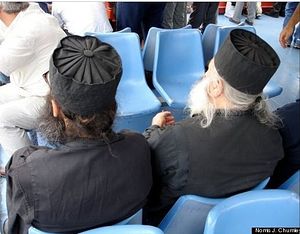 Monks on the ferry to Mt. Athos. Photo: Norris J. Chumley
There's a lot of interest in ancient and authentic Christian prayers and monasticism recently, especially with the CBS News '60 Minutes' piece on Holy Mt. Athos, the secluded peninsula in Greece home to continual prayer for the last 1,100 years. I made a spiritual pilgrimage to Mt. Athos a couple of years ago with a film crew, focusing entirely on the traditions of the prayers of the heart and the sacred mysteries of the central Christian prayer, the "Jesus Prayer." Here's a passage from my just released book and documentary feature film about Vatopedi Monastery, the second largest and oldest monastery on Mt. Athos, featured on '60 Minutes.'

"One of the traditions that took root on Mount Athos was introduced by St. Gregory Palamas (1296-1359), a monk of Vatopedi who developed a method of reciting the Jesus Prayer that is linked to breathing. Father Ruwais and Father Lazarus first taught us this at St. Anthony's Monastery in Egypt. As the monk inhales, he prays, "Lord Jesus Christ, Son of God," then pauses a moment, holding his breath, before exhaling and praying, "have mercy on me, a sinner." St. Palamas explains, "In this way, [the monk] will also be able to control the mind together with the breath."

It is a form of prayer that requires the focus of mind and heart, intellect and body. St. Palamas' method is known as hesychasm (worship in stillness), a type of contemplation in which one focuses body and mind on one goal: unceasing prayer. By entering a monastery or convent, a monk or nun has physically withdrawn from the noise of the secular world. Through hescychasm, he or she now withdraws deeply into him/herself to maintain a constant conversation with God. The inspiration for this private form of prayer is drawn from the Sermon on the Mount as recorded in St. Matthew's gospel. "When you pray," Jesus says, "go into your room and shut the door and pray to your Father who is in secret; and your Father, who sees in secret, will reward you" (Matthew 6: 6). The "room" mentioned by Christ is the interior, the soul, the nous, the seat of our spiritual energy and the place where the monk becomes aware of the presence of God. And it is the constant recitation of the Jesus Prayer that is his spiritual passport to that secret and sacred place.

Abbot Ephraim of Vatopedi Monastery on Mt. Athos spoke of this during our filmed conversation. "For all Christians, especially the monks," he said, "silence is important. But this does not mean only 'don't speak.' Mainly, silence, from the theological point of view, is the concentration of all the inner powers, in the mind, in the heart and the inner union of our nous. This is the main point of the teaching of St. Gregory Palamas. This can be achieved through the Jesus Prayer."

For St. Palamas, hesychasmis not one type of prayer among many but "the whole purpose of Christian life." Gregory Palamas believed that the point or goal of Christianity is to purify the heart and enter so deeply into the contemplation of God that He will graciously grant a glimpse of His glory. St. Palamas likened such an experience to the Transfiguration, when Christ took his three favorite apostles, Sts. Peter, James and John, to the summit of Mount Tabor and there let them see Him in His divine splendor. According to St. Palamas, the continual practice of reciting the Jesus Prayer may culminate in the type of vision the three apostles experienced on Mount Tabor.

I don't know how many of the monks on Mount Athos have been granted such a special grace, but I believe that it represents what all of them desire and strive for.

We were warned by many monks and nuns during our travels in the Middle East, Mediterranean and Eastern Europe about connecting breathing with the Jesus Prayer, and also special postures that advanced ascetics use. "These are only for monks who pray all the time, inside monasteries and caves, it is not safe for everyone to use these methods," one Anthonite, Father Matthew, cautioned off-camera.

Others, such as Mother Maria at Agapia Monastery in Northern Romania said, "why not use the Jesus Prayer, it is for everyone!"

One truth is certain: Recitation of the Jesus Prayer ("Lord Jesus Christ, Son of God, have mercy on me, a sinner") is very powerful, even for just a few minutes at a time. Whether you're in a cave or monastery, or in the cell of your apartment or suburban bedroom, you don't have to leave everything behind and become a monastic in order to find God in silent prayer.