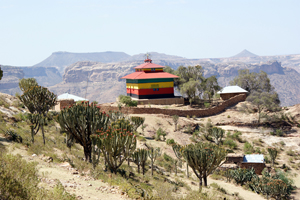 Orthodox priest and intrepid traveler Feodor Koniukhov concluded his expedition through Ethiopia on Pascha in the city of Aksum, reports Sedmitza.ru.

According to Ethiopian tradition, the Ark of the Covenant, given to Moses on Mt. Sinai, is preserved in a well-guarded chapel here.

Hundreds of Christian pilgrims with the Ethiopian Patriarch Abuna Paulos at the head came out to meet the Russian traveler in Aksum, singing ancient chants.

"This was a remarkable journey. I saw many Christian holy sites, which shall henceforth mark the route for other Russian travelers," Fr. Feodor related on Thursday.

The expedition made on camelback covered over 1000 km, through a territory inhabited by five little known tribes.

Fr. Feodor largely followed the route laid out by Alexander Bulatovich, who has always been an object of emulation for intrepid travelers. Bulatovich was a legendary officer, diplomat, explorer, and religious figure of the nineteenth century, who played an important role in Ethiopia's independence. In 1901, he built a chapel on the 40 hectares of land granted to Russia by the Ethiopian authorities. Bulatovich later went to Mt. Athos, where he received the monastic tonsure, then served in the Russian army as chaplain during World War I. In 1919, he was killed by bandits.

In 1947, Soviet diplomats razed the St. George chapel to make way for new consulate buildings in Ethiopia. Fr. Feodor is determined to rebuild it.