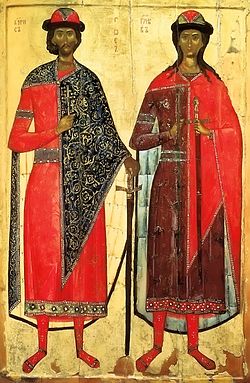 St. Boris and Gleb. Early confessors of the Russian land.
Many speak of today's feast as that of 'All the Russian Saints' or that of 'All the Saints of Russia'. This is incorrect. Today's feast covers the saints of a multinational territory, which stretches from the borders of Poland to the Sea of Japan and from Lapland to Kazakhstan. And the nationalities are not only East Slav, but there are among these saints Greeks, Bulgarians, Serbs, Tartars, Kazakhs, Germans, Italians, Hungarians, Latvians, Lithuanians, Swedes and English (1). At this very moment indeed, the Russian Orthodox Church is being petitioned to include nine saints of these islands in its calendar for universal veneration. These are: Sts Alban, Patrick, David, Columba, Augustine, Aidan, Theodore, Hilda and Cuthbert.

Today's feast was instituted in 1918, at a time when the terrible persecution of the Church had begun in Russia. It was considered that the people under the Soviet yoke had, as never before, to turn to the saints for intercession, protection, indeed, mere survival. As we now know, the number of martyrs of the Soviet yoke probably exceeds the number of martyrs throughout the world in the first three centuries of persecution of the Orthodox Christian faith. The whole country became the battleground of good against evil, spiritually, the centre of the world. In the dark days of the 1930s, many thought that this was the end, and yet by the 1940s people knew that the Church would survive and they continued to believe this even in the 1960s, when the tyrant Khrushchev announced that he would destroy the Church by the end of that decade. Instead, he was destroyed.

World history changed, as the battle swung back and forth. However, by 1981 a turning-point was reached, when the New Martyrs and Confessors of Russia were canonized in New York. And here, those of us who belong to the Church Outside Russia which carried out this canonization, have little reason to be proud. Why, scandalously, did we wait so long to declare the Martyrs and Confessors of Christ saints, when they were obviously so? True, this canonization occurred nineteen years before their canonization was completed in Moscow, but there they were not free, whereas we in the West were free. Why was this delay so prolonged?

This delay took place because of a lack of repentance. Only when people repent for their sins are they worthy to receive the saints. We should remember that in the Russian emigration there were many who were indifferent to the Church, many who had welcomed the abdication of Tsar Nicholas, many who were non-believers. Thus, my own relative, my brother-in-law's grandfather, who was the last Tsarist ambassador to Washington, was an open atheist. Thus, in 1938, Bishop (now St) John of Shanghai wrote a report on the spiritual condition of the Russian emigration, describing clearly how only a small minority were churchgoers and the majority had fallen into sin. As the Ever-Memorable Archbishop Averky, writing in the 1960s, pointed out, the White Movement failed, and all other such movements after it, because their aim was mainly political, not spiritual.

Only a minority wanted the restoration of Orthodox Russia, of the Monarchy, of the ideals of Holy Russia; the majority were politicized and had stopped thinking in an Orthodox way, they had stopped repenting. I can remember in 1975, writing in names of New Martyrs, taken from the books of Fr Michael Polsky, into my own calendar and being reprimanded for it by Russian emigres. In other words, even many in the Russian emigration were not ready to recognize the holiness of the New Martyrs and Confessors until 1981. What then can be said of those inside Russia? Only freed from the Communist yoke in 1991, after seventy years of Soviet propaganda, most were not at all ready to recognize the New Martyrs; it meant recognizing that the whole atheist system had been a gigantic aberration, a blasphemy. So the process took another nine years of repentance.

Today, with Secret Police archives being opened, the Commission for Canonization in Moscow is working its way through the detailed lives of the New Martyrs, establishing precise facts. So far over 28,000 new saints, over three times as many as were canonized by the Church Outside Russia in 1981, have been listed and accepted as saints of God. This list is constantly growing, as new facts and names are revealed. One day this list may extend to the names and lives of hundreds of thousands. This figure of 28,000 is not insignificant, for the number of churches open in Russia today is approximately the same - 28,000. It is as though as the number of New Martyrs and Confessors increases in our consciousness, so does the number of open churches, as three more open there every day.

Today, atheist rule is dead in Russia. The present Russian leader is an Orthodox Christian who has a chapel in his home. Two of us present in this church personally know his confessor. And we know that he must be a good Orthodox Christian, because he is slandered, not least by the media in this country, where he has become the victim of a politico-mafia plot.

Some 85% of the citizens of the Russian Federation are baptized. However, they are not Churched, only a small minority among them are in church today, or on any other Sunday. Astonishingly, perhaps, these facts are relevant to everyone in the world, Orthodox or not. Russia covers one seventh of the world, contains invaluable minerals and natural resources, huge forests and immense, and empty tracts of land in Siberia which, as the climate changes, are defreezing and becoming habitable, as they were once before. If all Russia were Churched, the whole of world history, our destiny, the direction of Western society, would change, just as it did when the anti-Russian Revolutions took place in 1917, just as it did when the Soviet Union fell.

And these are not my words, the words of a parish priest in a tiny and lost corner of England, these are the words of another. Nearly ninety years ago, speaking in English in St Paul’s Cathedral in London on 16 December 1919, the greatest Serbian saint of the twentieth century, the seer St Nicholas of Zhicha, prophesied thus in his address ‘The Spiritual Rebirth of Europe’:

If you see that the Church in Russia is the victor in its struggle against atheism, then you can be sure that you have been counted worthy to witness the sign of the spiritual rebirth of Europe…And if you see that for a whole century and more Europe has indeed been the most unChristian continent on earth, then your whole soul will tremble from fear. Your trembling will be the surest sign of the postponement of the coming of the end of the world. Nothing changes the human spirit and leads to its spiritual awakening so forcefully as the realization of its sins and fear in the face of the truth of God…

When the religious spirit – the only authentically life-giving and creative spirit – becomes the spirit that reigns supreme in family life, education, literature, art and journalism; when you see it on the streets and in the shops, in the towns and in the villages, not only in England, but all over Europe, then know that God has forgiven Europe and that it is on the path to becoming a new Europe.

Let him who is able to labour, labour and further this rebirth. Do not stop him who wishes to pray from praying. Let him who can reflect on this give birth to thought. All of this will no doubt help the common cause. These first lightning flashes of the religious rebirth of Europe must be clearly discerned and filled with living power. Otherwise, there will be nothing in history to compare with the drama of a whole Continent shaken to its very foundations…

1. See our article: The Saints of Russia and the Universality of Orthodoxy (November 1993) in Orthodox Christianity and the English Tradition