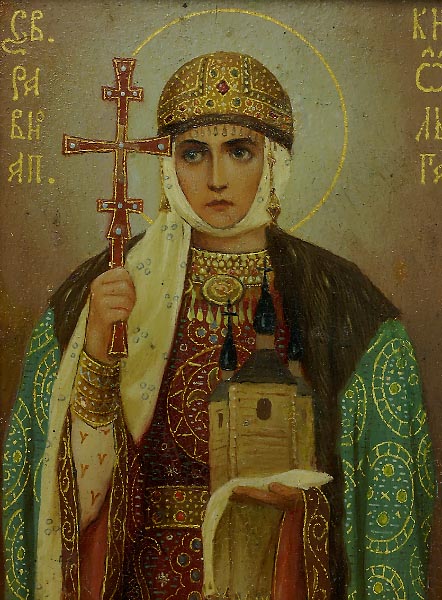 In the year 862, the Novgorod Slavs asked Rurick to be their prince. Two of his comrades-in-arms, Askold and Dir, left Novgorod to try their luck in the south of the country. They saw Kiev on the bank of the Dniepre and conquered it. In 866 they launched a campaign moving the Russian army from Kiev against Constantinople. In Constantinople, the Emperor Mikhail the III and the Patriarch Photios prayed to God and after the night service in the Blachernae Cathedral, they carried the cross to the shore of the Bosphorus bay. They dipped the sacred veil of the Theotokos into the waters of the bay. The sea that had been calm before that, became suddenly stormy and wrecked the ships of the Russians. Many of them died, and the ones who survived came home impressed and awed by the wrath that the Lord sent upon them. (Later that event began to be celebrated as the Protection of the Most-Holy Theotokos).

Before long, a Greek bishop came to Russia and started preaching and telling Russians about our Lord the Savior and the holy miracles recorded in the Old and New Testaments. The Russians who heard him telling about the three young men who survived the blazing furnace of Babylon (Dan. 3) stopped him and said, "If we do not see a similar miracle, we will not believe you." The bishop said prayers and then placed the holy Gospel into the fire. The flames did not harm the Gospel; not even the cloth book markers were singed. This miracle impressed the people so much that many of them began to convert to Christianity. A church dedicated to St. Nicolas the Wonderworker was built on the grave of one of those Christians.

Oleg, Rurick's relative, succeed his throne. He conquered Kiev and had a successful military campaign against Constantinople (in the year 906). He also accomplished a trade treaty with the Greeks that was profitable for the Russians. Rurick's son, Igor, signed a new trade treaty with Constantinople after another war in 945. Describing this event the chronicler mentioned that in Kiev the prince's army swore to observe the treaty; pagans vowed before the statue of Perun, while Christians vowed in the church of St. Ilias. This shows that under Igor there were Christians in Kiev and even among the prince's soldiers. Igor's wife, Olga, was very beautiful, intelligent and virtuous. After Igor's death she ruled Russia because her son Svyatoslav was too young at the time. According to the annals, she was terrible and merciless to the enemies of her motherland. But the Russian people loved and respected her as a mother for her caring devotion, compassion and fairness. She never tyrannized anyone, she was a fair judge, her punishments were merciful, and she cared for the poor, the elderly and the crippled. She listened patiently to every petitioner and was glad to fulfill every fair request.

When Svyatoslav grew older she could spend more time on charity. Her conversations with Kiev clergymen led her to understand the value of the true faith in contrast to paganism and she decided to be baptized (in 957). According to the old stories told at that time, she went to Constantinople for the sacred mystery of Baptism to be performed by the Patriarch Polyeuctus. Emperor Constantine Porphyrogennetos was her godfather. Saint Olga was baptized Elena. After being baptized, Saint Olga tried to persuade her son to convert to Christianity, but Svyatoslav was too belligerent to accept her convictions. "I will be a laughing stock before my soldiers," he said. At the same time he did not prohibit his subjects from being baptized. When St. Olga came home after Baptism she devoted her life to Christian piety and to the spreading of the Christian faith among her subjects. It is believed that it was St. Olga who built the wooden church of St. Sofia in Kiev.

According to an author from that period, St. Olga, "having perceived the true God, Maker of heaven and earth, and having converted into Christianity, destroyed the idols of the devil and began to live according to Jesus Christ's commandments. She loved God with all of her heart and soul and sanctified herself with the good deeds of clothing the poor, giving food and rest to homeless, providing the destitute, orphans and widows with everything they needed and doing this all with the quiet love of her heart."

Saint Olga left our world in 969. Prince Vladimir placed her incorrupt relics in the Desyatinnaia cathedral. It was the first time that sacred relics were revealed in Russia. Later (before the Mongol invasion) God glorified the relics of the Princess Olga with miracles and she was canonized a saint.

Thou didst give wings to thy mind with the knowledge of God./ and soar beyond creatures to God the Creator of all./ And when thou hadst found him thou was baptized and reborn./ Thou dost enjoy the Tree of Life, remaining eternally incorrupt, O ever glorious Olga.