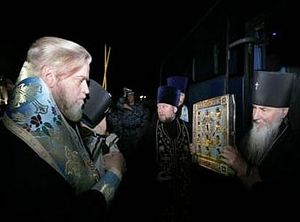 On September 24, 2011, with the blessing of His Holiness Patriarch Kirill of Moscow and All Russia, the miracle-working Kursk-Root Icon of the Mother of God “of the Sign” was brought to the Kursk Root Hermitage.

The icon is accompanied by a delegation of the Russian Orthodox Church Outside of Russia headed by His Eminence Archbishop Mark of Berlin, Germany and Great Britain.

On the evening of September 23, the holy icon was flown from Kazakhstan to Moscow. At Sheremetevo Airport, it was greeted by a delegation from Kursk oblast headed by Governor AN Mikhailov. That night, the icon was taken to Kursk Root Hermitage, according to a report by the Kursk Diocesan website.

His Eminence Archbishop German of Kursk and Rylsk greeted the icon at the gates of the monastery, along with its Prior, Hegumen Veniamin (Korolev) and his monks, clergymen of the Kursk Diocese and civil officials of the oblast. Divine Liturgy was then celebrated at the Cathedral of the Nativity of the Mother of God.

The miraculous icon will be taken via a procession of the cross to Znamensky Monastery in the city of Kursk, where it will remain until October 2.