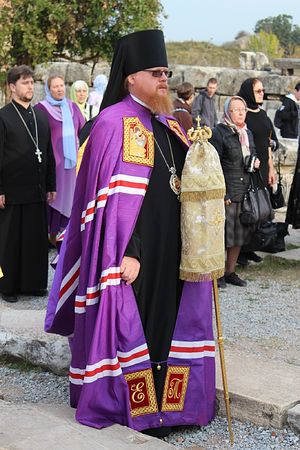 Bishop Tikhon (Zaitsev) of Podolsk.
The largest and latest pilgrimage by Russian Christians to the holy sites of ancient Byzantium on the territory of modern Turkey has recently come to a close. A group of sixty pilgrims and clergymen from the Russian Orthodox Church visited the places so dear to the Orthodox heart, from Constantinople to Ephesus, travelling to the regions of Bithynia, Pontus, Lycia, Pamphylia, Cilicia, Cappadocia, Galatia, and Pisidia, sanctifying their path with united prayer, and Divine Services in half-ruined churches. They also met with clergy and secular officials who kindly cooperated in the development of this important pilgrimage route.

Bishop Tikhon of Podolsk, who led the group, tells us how this eventful pilgrimage went.

—Why are those lands so meaningful to Orthodox pilgrims?

—The territory of modern Turkey is the cradle of Church history and tradition. Here the Apostles Peter, John, Phillip, and Andrew lived and preached; The Apostle Paul was born here; a host of martyrs suffered here for Christ, establishing the faith by their ascetic labors and converting whole nations to the salvific way of the Gospels. Here all seven Ecumenical Councils took place, strengthening Christ’s Church with clear and well-ordered doctrine, and great theologians wrote their works. Here the Byzantine Empire existed for an entire millennium, manifesting a glorious example of sovereign Christian government—mighty, and deeply spiritual. It is difficult to separate out the most important thing. Here is a rare concentration of spiritual meaning per square kilometer of territory. It is important that these unique places become accessible for prayer.

—How were you able to organize such a comprehensive trip? Were there difficulties?

—With the blessing of His Holiness Patriarch Kirill, I was vested with responsibility for the pilgrimage aspect of the Moscow Patriarchate’s activities a year ago. Development of the Byzantium route was part of that obedience. We had to work everything out very carefully—we had to take into consideration the nuances of both inter-Church and inter-faith relationships. We had to balance the natural Islamic caution of a government that is essentially, albeit not formally Islamic, with economic prospects that are quite advantageous to it. There were purely technical questions, for example, the complicated transportation to very many holy sites. But our joy that now the Orthodox have the opportunity to visit these sites in an organized way and pray at them more than compensates for all the difficulties.

—I have heard that trips to Byzantium have a special status. Is that true?

—That is quite right. At the blessing of His Holiness Patriarch Kirill, the pilgrimage groups to Byzantium will now be headed by bishops, and this gives these trips a special status. It shows the seriousness of our intentions to develop these routes; it ensures a special level of reception by ecclesiastical and secular authorities, and compels our Turkish partners to work out all organizational and security issues on the highest level. It is important also that the presence of Russian bishops draws the interest of the press and society—the subject of Russian pilgrimage is taking on a highly official status in Turkey. Well, and most importantly, it is significantly easier for a bishop to receive permission to conduct Church services than it is for an ordinary priest.

—Do pilgrims need permission to pray at holy sites?

—Of course. There is a complicated and many-staged process involved in receiving permission. This matter is decided by the Patriarch of Constantinople as well as the various secular structures, if we are talking about churches that have the status of a museum, for example. Also, every district of the country has its own bureaucracy, which has to be hurdled. 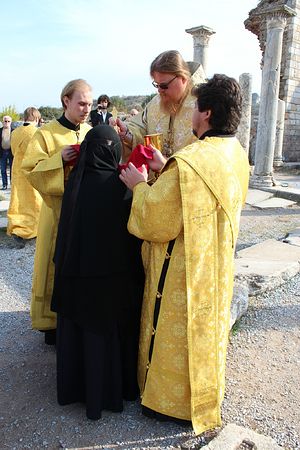 —How many such “hierarchical” groups have been to Byzantium?

—Our group was the fifth. Earlier groups of clergymen and pilgrims visiting Turkey were headed by Metropolitan Vikenty of Tashkent and Uzbekistan, Metropolitan Kirill of Ekaterinburg and Verkhotourye, Bishop Seraphim of Bobruisk and Bykhov, and Metropolitan Vladimir of Chisinau and all Moldavia. I thank each one of them for their colossal contribution to the common work of our Church.

—Was your trip the largest in scope, geographically?

—Yes, surely. As the one responsible for the plans, I considered it my duty to visit all the places we offered to our pilgrims. A usual route has fewer than half of the places that we were able to visit. This was very intense due to the number of transfers from one place to another, but I had to see for myself that all the sites of visitation were worked out organizationally. But my main goal was to investigate and prepare as many opportunities as possible for Church services in the future. For example, next after us, Archbishop Theognost of Sergiev Posad [also the Father Superior of the Holy Trinity-St. Sergius Lavra] will go to Turkey, and he expressed his desire to serve the Liturgy every day. We should be prepared to provide such opportunities.

—Vladyka, where were you able to conduct service this time?

In the Church of the Most Holy Theotokos in Ephesus—the first church in the world dedicated to the name of the Mother of God—the Third Ecumenical Council took place. Unfortunately only its ruins remain, and our services were held under the open sky.

—What other places would you like to open—if I can put it that way—for life of divine services?

—Very dear to me are the places connected with the names of Sts. Gregory the Theologian and Basil the Great. I would like to serve in the cave churches of Cappodocia. We were all deeply impressed by Nicaea. Pilgrims rarely come there, and that is a pity; this is the place where the First and Seventh Ecumenical Councils took place, in which the dogmatic formulation of our faith began and ended. I will also name the metochion of the St. Panteleimon Monastery in Istanbul. These are the places where there is some degree of certainty you can receive permission to hold services.

—What about the Hagia Sophia? Are you able to imagine any conditions under which we could pray there?

—This dream remains a dream, of course. Right now you can’t even cross yourself there—they will fine you, even take you to the police department. Until only recently they did not even allow clergymen to enter together with the entire group—only through a separate entrance, and under strict observation. But this pearl astounds through the mere contemplation of its grandeur. This church is the most distinguished example of an expression of man’s infinite love for the Lord. When construction began, all knew that three imperial treasuries would be required to complete it! But their love for the Lord was foreign to calculations, and Emperor Justinian and the people were united in their longing to dedicate the best they had to God. The Hagia Sophia is the fruit of that love—it is the fullest artistic embodiment of religious thought in Eastern Christianity, the Divine chamber, the ideal of church architecture for all Orthodoxy. 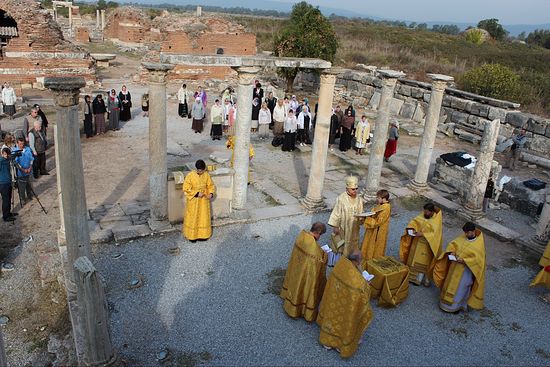 —Did Patriarch Bartholomeos of Constantinople receive the entire group?

—Yes. Our pilgrimage began with Divine Liturgy in the Church of Great Martyr George in the Phanar, and Patriarch Bartholomeos received us afterwards. He greeted our group very warmly, and emphasized that we had now received the travel blessings of two Patriarchs (meaning Patriarch Kirill and himself), and expressed his hope that we receive the greatest possible benefit from the grace of these places.

— Who conducted the tours?

—According to the rules of this country, groups should be accompanied by a local guide. This should not scare you—they are qualified and highly educated people. The measure of the guides’ religious tolerance is of course related to their particular personalities. Therefore we played it safe and brought along our own expert—the excellent historian and Byzantologist, Pavel Vladimirovich Kuzenkov. His knowledge and understanding of these places and their significance in ecclesiastical history definitely helped us to see, feel, and understand things correctly. I think that every group that goes to Turkey should have its own Orthodox expert.

—Vladyka, what do you see as the next task in the development of this movement?

—Renewal of liturgical life at Byzantine holy places is the main thing we want to achieve. I had many meetings in the most varied corners of this country and with representatives of central and regional ministries of culture and tourism, also with our diplomats, with Greek clergy, and Russian communities, and we were able to come to agreements on many things. We now have points of contact. All are beginning to understand that Russian pilgrims will be making massive trips to Turkish areas only when they will be able to pray at these holy sites so dear to them. For Turkey, this means that many more regions that are currently economically backward will receive a new impulse for development. Furthermore, the flow of Russian Orthodox pilgrims will be especially voluminous during the seasons when even fair-weathered Antalya has no tourists: fall, winter, and spring. Summer is just too hot of a period for pilgrimage. I can foresee that the route “holy sites of Byzantium” has the potential to become one of the most popular pilgrimage routes. And there will be non-stop flights from Moscow to Cappadocia—in time, of course. However, we should first clearly arrange a plan of cooperation. Very much needs to be taken into consideration and worked out. I think that for now, all Russian groups should be headed by a bishop. These places are very dear to us, but they need to be assimilated carefully.

What pilgrims will see in Byzantium.

This land is filled with New Testament and patristic recollections, because the life and history of the Church is bound up with them. In a particular sense, it could be considered the second birthplace of the Church, after Palestine.

In antiquity there were several provinces occupying this territory: Thrace on the western shore of the Bosphorus, and on the eastern shore, Bithynia, Pontus, Lycia, Pamphylia, Cilicia, Cappadocia, Galatia, Phrygia, and Pisidia, comprising the area of Asia Minor, or Anatolia. A part of ancient Syria was also on the territory of modern Turkey. Here the Apostles Peter, John, Phillip, and Andrew lived and preached. The Apostle Paul was born here, and he and his co-laborers the Apostles Barnabus and Luke made a large part of their missionary journeys in this area. The beloved disciple of Christ, Apostle John the Theologian, and the Apostle Phillip finished here their earthly life. Through the efforts of the Apostles and their co-strugglers in Antioch, Ephesus, Smyrna, and other cities we read about in the Book of Revelations, great Christian communities grew here. This all happened on an unprecedented scale: half of the fifty places that received the Gospel of Christ in the first century were located in modern Turkey.

Here the Byzantine Empire formed and stood, showing its example of faith that lived for centuries, and the Christian statehood founded upon it, beginning with the Holy Equal to the Apostles Constantine the Great.

Here in Nicaea, Constantinople, Ephesus, and Chalcedon were held all Seven Ecumenical Councils, which formed the foundation of Christian doctrine.

Here great theologians wrote their works: Holy Hierarchs Basil the Great, Gregory the Theologian, John Chrysostom, Gregory of Nyssa, Theophilus of Antioch, Meliton of Sardis, Ireneus of Lyon, Methodius of Olympus, Gregory the Wonderworker, Amphilochios of Iconium, Proclus, Flavian, Germanus, Tarasius, and Nicephoros of Constantinople, Gregory Palamas and Mark of Ephesus, Saints Ephraim the Syrian, Roman the Melodist, Maximos the Confessor, Theodore the Studite, Simeon Metaphrastos, and Simeon the New Theologian, Church historians Socrates and Sozomen. Here St. Nicolas the Wonderworker served as bishop and worked wonders of mercy, here Righteous Philaret the Merciful was glorified by his generous almsgiving, and here St. John the Russian completed his life of ascetic struggle. [This is only a portion of the saints glorified in this land].