Interview with Natalia Khozyainava, head of the program, “Live, Little One”.

A recent project by the Russian St. Basil the Great Fund is a video entitled, Live, Little One, created to help dissuade women who come for consultation from having abortions. The director of the program, Natalia Khozyainova talks about her efforts to defend life.

—Natalia, tells us how the video will help in the struggle against abortions? 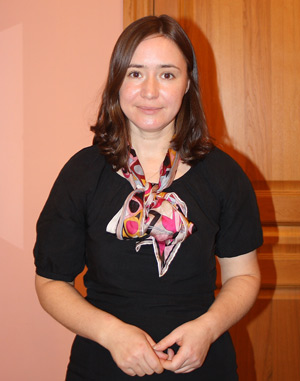 Natalia Khozainova
—The St. Basil the Great Fund has decided to install monitors in every pregnancy counseling center in Russia that will show special films and video clips. Thirty-six monitors have already been installed in Vologda province, and forty-four in Ryazan province. Next will be Amur, Novosibirsk, and Krasnoyarsk provinces. Monitors will hang in the most visible spot in the clinic, where there are the most people: in the midwife’s and gynecologist’s offices and in the ultra-sound room. Future mothers in the waiting rooms will spend their time usefully by watching the films. Besides the films will be shown legal information, telephone numbers of people they can trust, and addresses of crisis centers.

We first want to cover the most demographically depressed regions, where there are 100 abortions for every 100 births. We expect the number of abortions there to drop by 10 percent. We intend to install monitors in ten regions of Russia this year. We will get to Moscow next year, because the information about abortions is already available there, and the need is not as acute. The program was begun in March of this year (2011) and should last about three years—by that time monitors should be appearing all over Russia.

The content will change four times a year. Certain films were given to us by our partners, one of them we produced ourselves. We were aided in this by a number of famous women who agreed to tell how they themselves faced the problem of choice, what they experienced and felt during their pregnancy, birth, their children’s infancy, how they managed the difficulties involved, and what these difficulties in fact are.

—In the film, Live, Little One the “stars” recount the stories of their happy motherhood. Many of them were faced with unexpected and often unwanted pregnancies. How can these “negative” examples help to cultivate maternal feelings in our women?

—Women who are in doubt about having their babies are most often those who have fallen into to a difficult life situation. If they are in happy families and everything is in order, thoughts of abortion normally do not come up. Therefore we want to show through the example of famous, popular people that all of these difficulties can be overcome, and that there is nothing more important than human life.

We approached various public figures, but few were willing to talk about themselves. We needed true stories; when a woman thinks about an abortion, when she needs to make a decision, she experiences very complex feelings… Many have experienced this, but they did not want to talk about it front of a camera. The subject of abortions is frightening. This, by the way, is why the word “abortion” is not pronounced in the film.

But it seems to me that it is even more effective when we see on the screen a successful modern woman who lives an ordinary life, works actively, and builds relationships with various men—not thinking perhaps, about what might come of such love. Perhaps she doesn’t yet have a serious desire to start a family when suddenly she has to decide her child’s fate—to let him live, or not. And what must go on in her soul when she suddenly reaches the conclusion that a child is happiness regardless of the problems she will encounter because of her pregnancy?!

It is interesting that famous actresses, athletes, ballerinas, or television personalities who tell their stories in the film were afraid of the consequences but then overcame them easily, because they understood what is really important. After all, can a ballerina really drop out of her “work process” for a whole year? Or what should a television star do, if she has just been given the opportunity to head her own program during prime time and had no plans to stop everything for a baby? To some this would seem to be a real tragedy. But the women who had these experiences think differently.

—Why not show a normal family with no anomalies in order to provide a positive example to women in doubt?

—There are films like that in our program, for example, Maxim and Liza—a film about a large family. We have eight films right now, which we chose with the help of psychologists. Different sides of the problem are looked at in them. It is also important that they all create a positive atmosphere in women’s counseling. They often frighten us, but rarely enlighten.

—According to the psychologists’ opinion, what should be shown on the screen in order to reach a woman who is wondering whether or not to continue her pregnancy?

—The most effective method is to make those who have decided on abortion think more carefully about it is to visually demonstrate to them what their child is like, how he looks, how his heart beats. Then the mother will not only know, but she will feel that her child is alive, and that he already exists, and that an abortion will kill him. Many psychologists find that people do not know or do not want to know that an embryo is not just a group of cells. Therefore, for example, a film about the child’s development in the uterus, which is also part of our program, simply must be shown in women’s counseling. It is likewise very important to talk about the consequences of abortions. And of course we should show happy mothers who tell them about the miracle of a new life in their families.

—Some of the film’s heroines talk about how they lost the man they love after getting pregnant because he did not want to accept the responsibility. That really does often happen. But by showing such “women’s” stories and experiences, don’t we lose the attention of men, who could also use some enlightening?

—It’s true—so far, there are few men in the films included in our program. But this is a very interesting idea. Men rarely come to pregnancy counseling, but if we were to show our video clips and films in, for example, the reception rooms of business centers, where there are large TV screens and many people pass through each day, then many men would see them. I hope that this will become the next stage in the project by the St. Basil the Great Fund. There are such plans.

—What do the women who come to counseling think about your project? Have you conducted a survey of their opinions? 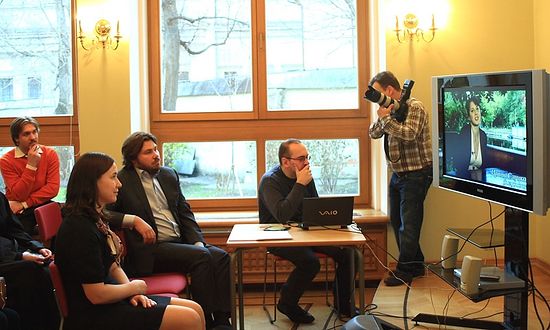 Premier of the film, "Live, Little One" for the press.

—During the course of the program I have had to check on the program’s implementation in the various locations, and that includes talking with pregnant women who have seen the films in the clinics. I have also been able to “watch” their reactions.

As a rule, women say that watching the video clips lifts their spirits and evokes only the most positive emotions in the future mothers. But I have seen how some of them shed tears. One of the most common reactions is, “If only they had shown me it earlier, everything would have been different.”

—Have you been able to cover all the clinics in those cities, or only some of them?

—The monitors will be installed in all the state pregnancy counseling centers of the regions. An agreement about this has been reached with the Ministry of Social Health and Development. The negotiations were not easy, but they did take place. Political initiative also played a role, of course—we receive help from the Center of Socio-Cultural Initiatives, in which the President’s wife, Svetlana Medvedev participates. Ninety-eight percent of the clinics themselves support our initiative, but there are two percent that are not pleased.

One important problem is that in private clinics, where the largest number of abortions are performed, there is no form of pre-abortion consultation, no honest information about the consequences of abortion, and no psychological support whatsoever that is not aimed at deception and complacency. There is no attempt to dissuade a woman from killing her child.[1] Of course, I would like for our films to eventually be shown in private clinics also.

Incidentally, after people heard about our program they began to send other video content. Our specialists choose what is appropriate, and we hope that the number of films shown in pregnancy counseling centers will increase.

[1] Obviously, because they would then lose the profits they make from this grisly industry. —OC.