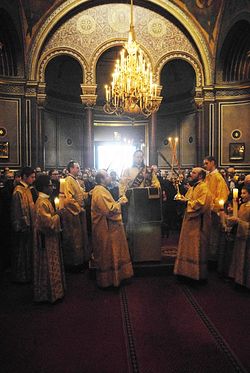 Within the program of the celebration of the 150th anniversary of the consecration of the church, 29 Russian artists who were born in France or came to live there presented the cathedral their works for selling and fundraising for restoration works.

The cathedral as well as other architectural sites in Paris is built from porous limestone that is subjected to erosion and requires expensive maintenance.

The exhibition and auction aim at reviving interest of French public to works of Russian painters living in France.