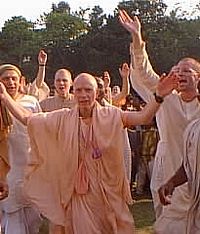 Head of the Expert Council for State Religious Expertise under the Russian Justice Ministry Alexander Dvorkin believes Bhagavad Gita As It Is with the commentary written by the founder of the International Society for Krishna Consciousness Swami Prabhupada is an extremist book.

"The main idea of the PR-campaign launched by Krishna followers and their allies is that the great monument of ancient Indian literature, holy book of Hinduism Bhagavad Gita, is under trial and the world classic can be banned. But it's a lie," Dvorkin, who is also a renowned expert on sects told Interfax-Religion last Thursday.

As was reported, the Leninsky District Court late in December last year rejected the Tomsk Prosecutor's appeal to recognize the holy for Krishnaites Bhagavad Gita As It Is with Prabhupada's commentaries an extremist book. The process in Tomsk caused protests from Indian politicians and public. The theme of "prosecutions against Hindus in Russia" became top news in leading Indian media.

The interviewee of the agency said that all claims of the Prosecutor Office referred to Prabhupada's commentaries as, for example, "they contain rude and insulting statements about people belonging to other religions."

"There is sex discrimination, there are indications that a person shouldn't be a patriot since a person who loves his Motherland and children is similar to pig, camel, donkey and so on. Children are considered a "by-products of the body," and thus equated with defecations. Such quotations can take several pages," he said.

Dvorkin also notes that the Society for Krishna Consciousness does not belong to traditional Hinduism as it is impossible to become a Hindu--you can only born in the caste. Hinduism is unthinkable without caste system.

He noted that the Communal Bharatiya Janata Party first came to power in India in the 1990-s; its ideology was based on religious nationalism, and it offered a version of neo-Hinduism. They were the first to exploit the idea of "guru on export."

"Communalists understood that gurus who go to Western countries and their newly converted adepts play rather important political role, can be agents of influence, and bring real income. As all these gurus then come back to India, many Western people who fell in their nets come after them to see them, to live beside them and certainly bring their money with them," the expert said.

According to him, though Communalists are not in power, the Indian National Congress, which replaced them, "realized that gurus on export is a profitable thing, and started supporting pseudo-Hinduism projects in the West."