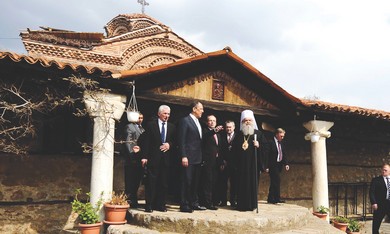 MACEDONIAN ARCHBISHOP in front of church
An Orthodox church was set ablaze in the southwestern part of the Former Yugoslav Republic of Macedonia (FYROM) on January 30. The incident reflects raising tensions between local Christian Slavs and Albanians, more than a decade after an Albanian rebellion brought FYROM to the verge of an ethnic war. It also evokes memories of the early stages of the conflict in Kosovo, in the late 1980s.

The Church of St. Nicholas, in the majority Albanian-Muslim village of Labuniste, was two centuries old and housed valuable icons. The arson at Labuniste followed the burning of a Macedonian flag and the raising of Albanian and Islamic banners in the neighboring town of Struga, allegedly in reaction to an incident of “mocking Islam” at a local carnival last month.

The town, on the shores of Lake Ohrid, lies at the southern edge of the line of ethnic separation between the two communities.

The exact figures are disputed, but Macedonian Slavs account for about two-thirds (1.3 million) and Albanians for 30 percent (600,000) of the republic’s two million people.

The latter, 98% Muslim, have had a remarkable rate of growth since 1961, when they accounted for only 13% of the total. The Albanian birthrate has been more than twice that of Slavs for decades.

Following the signing of the NATO-brokered Ohrid Agreement that ended the 2001 Albanian rebellion by the “NLA” (a Kosovo Liberation Army subsidiary), FYROM has become binational and bilingual and the Albanians its second constituent nation. They are guaranteed proportional share of government power and an ethnicallybased police force. This has turned FYROM into the weakest state in the Balkans and its de facto ethnic partition has become formalized and internationally guaranteed.

Having secured their dominance along the borders of Albania and Kosovo, the current main thrust of the Albanian ethno-religious encroachment has the country’s capital city as its primary objective. It is a littleknown fact that today’s Skopje is effectively as divided as Nicosia or Jerusalem. Once a city quarter becomes majority-Albanian, it is quickly emptied of its Slavic, non-Muslim population.

The time-tested technique is to construct a mosque in a mixed area, to broadcast prayer calls at full blast five times a day, and to create the visible and audible impression of dominance that intimidates non- Muslims (the locals call it “sonic cleansing”).

During the 2001 Albanian rebellion the NLA was largely financed by the smuggling of narcotics from Turkey and Afghanistan. In addition to drug money, as The Washington Times reported on June 22, 2001, “the NLA also has another prominent venture capitalist: Osama bin Laden.”

French terrorism expert Claude Moniquet told The Christian Science Monitor in 2006 that up to a hundred fundamentalists, “dangerous and linked to terrorist organizations,” were ready in sleepercells in Macedonia. New recruits are offered stipends to study Islam in Saudi Arabia, and they are given salaries and free housing to spread the Wahhabi word on their return to FYROM.

In March 1999, on the eve of the war in Kosovo, I wrote in The Times of London that NATO support of ethnic Albanian separatists in Kosovo would unleash a chain reaction whose first victim would be Macedonia, because “once KLA veterans acting as policemen start to patrol Kosovo, the rising expectations of Macedonia’s Albanians will be impossible to contain.”

“Nonsense,” a US State Department official snapped at a conference in Washington a few days later. “The problem in Kosovo is [Slobodan] Milosevic.

In Macedonia the Albanians don’t need to make trouble because their rights are respected.”

The issue was that of “human rights,” he said, not nationalism: the notion of Greater Albania was a Serb paranoid invention.

Thirteen years later we know the score. The KLA has morphed into the “Kosovo Protection Corps” (KPC).A “Greater Albania” is taking shape, with the US government still in denial about this reality. In western FYROM, in the Greek Epirus, and in the Malesija region of Montenegro, no institutional arrangements short of ethnic partition will assuage Albanian separatism.

The Albanians enjoy the backing of a powerful regional player, Turkey. They are a key link in the steadily developing Islamist “Green Corridor” in the Balkans, and are heartily supported by the Islamist government in Ankara in all their endeavors.

The project’s goal of creating a contiguous chain of Muslimdominated polities from Istanbul in the southeast to northwestern Bosnia needs to bridge a 90- mile gap in Macedonia between the Muslim Pomaks of southern Bulgaria and their Albanian coreligionists in FYROM. On current demographic and political form it will be bridged by the middle of this century.

There is nothing particularly unusual about Albanian ambitions and methods: Pre-modern nations and tribes have been at it since time immemorial. The Albanians differ only in that they have perfected the art of using foreigners – sultans, kaisers, duces, fuehrers, comrades and over the past two decades the US government and NATO bombs and troops – to get the job done for them.

The only reason that ethnic Albanians still tolerate NATO’s presence in Kosovo – now that it is no longer needed to defeat the Serbs – is that it has not seriously attempted to protect them either.

Both demographically and politically, the Republic of Macedonia has a precarious present and an uncertain future. With the gradual decline of the American empire, however, sooner or later the Albanians will have to face their long-abused neighbors without foreign cover. That will present them with an unexpected problem, and its eventual resolution – however just – may be messy and unpleasant, in the distinctly Balkan way.

The writer is foreign affairs editor of Chronicles: A Magazine of American Culture and the author, most recently, of Ustasa: Croatian Fascism and European

...
Предыдущий Следующий
Комментарии
Войдите через FaceBook ВКонтакте Яндекс Mail.Ru Google или введите свои данные:
Chris M. Purdef 2 апреля 2012, 01:00
Professor Trfkovic seems to care about the "Christian slavs" in his essay, yet at the same time has trouble calling them by their real name and continuing the unreasonable row that keeps this nation distablized. I guess he wants us to believe that it's only the Albanians who want to keep Macedonia ghettoized and not the Greeks, Serbs, and Bulgarians as well. Perhaps when we Orthodox in the Balkans finally grow up and quit worrying about real-estate and who wears the Mitre, we can get to the business of looking at each other as equals, finally start spreading the Gospel and work to either bring the Albanians into the Church or make them flee the good news. Otherwise, this is nothing more than the same old jargon from our "loving neighbors."
Petronija Makaveeva16 марта 2012, 13:00
We are Republic of Macedonia not firoM. Republic of Macedonia has the right of its name!!! Don't You f.y.r.o.m. ME, Call Me By My Name Say MacedoniA !!!