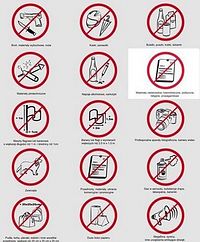 Angry conservative MPs say just-published guidelines - drawn up by the Polish Football Association - on what fans can and can't take into stadiums include an "anti-Catholic" ban on Bibles and crosses.

"It looks as if it is Catholicism that is under fire. I strongly protest, and demand that the swiftest possible action be taken to change the rules," said MP Anna Sobecka in a letter to the country's sports minister Joanna Mucha.

"If it is prohibited to wear Catholic symbols, and Catholics would like to wear them, then this is discrimination, and it's as simple as that," she added.

Protesters claim that a new list of banned items shows a Bible crossed through with a red line and marked "Materials that are racist, xenophobic, political, religious and propaganda-based."

Other banned items include the ear-splitting vuvuzela horns that have dominated crowd noise in previous big tournaments.