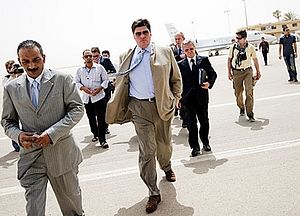 Russian envoy to Africa, Mikhail Margelov (C), arrives at Benghazi airport on June 7, 2011 for meetings with Libyan rebel leaders in the first trip by a top Russian official to their stronghold. Source: AFP/East News
Africa has encountered the dramatic consequences of the Libyan crisis, he said.

"An increase in Islamic influence is a major tendency that will determine the development of this region in the foreseeable future, and the outlines of a 'green arc' of instability stretching from the Maghreb, Nigeria to the Horn of Africa can already be seen," he said.

The Arab Spring destroyed the counterbalance to such a scenario - the secular governments of Tunisia, Egypt and Libya, Margelov said.

"The general atmosphere of tension is generating a high degree of uncertainty in forecasting a concrete scenario for disturbances in different countries of this vast region," he said.

Analyzing the situation in Africa, Margelov noted instability in the Maghreb region and the Sahel, which are witnessing an upsurge in the activities of separatist and Islamist groups, who obtained weapons previously used in Libya.

"This Islamization has been supported by the victory of moderate Islamists in the elections in Tunisia and Egypt. The al-Qaeda extremist organization has sharply stepped up its activities in countries of the Islamic Maghreb," he said.

The military riot in Mali was staged amid serious successes of the pro-Islamist Ansar al-Din group in the northeast of this country, he said.

"However, it would be wrong to link the mutiny at the military base in Mali with these successes of Islamists, although the rioters, among other things, accused the command of "poor army control." This unrest should not be viewed as an attempt to depose the regime either because so far the rioters have not voiced a demand to oust the democratically elected ministers," Margelov said.