Representatives of the Local Orthodox Churches: Schismatics can come back to the Church only through repentance 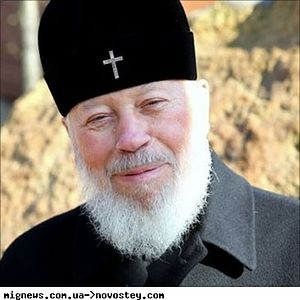 Metropolitan Vladimir of Kiev and All Ukraine.
In late July, delegations of the Local Orthodox Churches came to Ukraine to celebrate the 20th anniversary of His Beatitude Vladimir’s tenure of office as Metropolitan of Kiev. These were the Churches of Constantinople, Alexandria, Antioch, Jerusalem, Georgia, Serbia, Bulgaria, Cyprus, Greece, Poland, the Church of Czech Lands and Slovakia and the Orthodox Church of America. On the commemoration day of St. Vladimir, members of the delegations, His Beatitude Metropolitan Vladimir if Kiev and All Ukraine, permanent members of the Holy Synod of the Russian Orthodox Church and other hierarchs concelebrated the Divine Liturgy with His Holiness Patriarch Kirill of Moscow and All Russia at the Cathedral Square of the Assumption Laura of the Caves in Kiev.

Some representatives of the Local Orthodox Churches gave interview to “Orthodoxy in Ukraine”, stating their attitude to the problem of church schism in Ukraine.

Metropolitan Emmanuel of France, head of the delegation of the Patriarchate of Constantinople, is convinced that the only way to the restoration of church unity is the return of schismatics to the Orthodox Church led by Metropolitan Vladimir. Metropolitan Emmanuel added that the Patriarchate of Constantinople has not maintained any contacts with schismatics and has not recognized them. The Church of Constantinople keeps in line with all Orthodox, and a unilateral recognition of schismatics is out of the question. Any talk about a possible recognition does not relate to reality; Filaret is trying to write his own “A Midsummer Night’s Dream.”

Metropolitan Emmanuel also spoke about relations between the Church of Constantinople and the Russian Church. “The relations between Constantinople and Moscow have improved and we should cherish and guard them like the apple of our eyes,” he said and added with confidence that His Holiness Patriarch Kirill of Moscow and All Russia was disposed towards solving problems on the agenda.

Metropolitan Petros of Aksum from the Church of Alexandria also stated unequivocally that schismatics had not the faintest chance of recognition by the Local Orthodox Churches. The jubilee festivities have clearly shown the present stability in the Ukrainian Orthodox Church, he said. He is convinced that nothing can disturb the peace in the Church.

Metropolitan Gavriil of Loveč, who led the delegation of the Bulgarian Orthodox Church, told the journalists about the history and appearance and overcoming the schism in Bulgaria, noting that the government contributed to the appearance of schism in 1992. Yet later, a law on religions was passed, which actually did away with the schism. The government saw that none of the Orthodox Churches recognized the schismatics, but did recognize the canonical Church. There are secular people in the government who cannot always discern certain things, but it was clear to them that the Orthodox Church is one and does not recognize schismatics.

Metropolitan Gavriil noted the role of the All-Orthodox Council held in Sofia in 1998. It summoned the schismatics demanded repentance. They understood their sinfulness and repented.

Should the Ukrainian Orthodox Church receive the schismatics, the Local Churches would recognize them, he added.

Metropolitan Nicolaos of Messogaia and Lavreotiki from the Orthodox Church of Greece said that recognition of the “Kievan Patriarchate” was out of the question, as the Local Orthodox Churches recognize only the canonical Ukrainian Orthodox Church. “The healing of the schism is her internal problem, and she must solve it without any pressure on the part of the other Orthodox Churches,” he said.

Metropolitan Nicolaos underscored the impossibility of recognizing the sacraments administered by the schismatics and told the journalists about a similar situation in Greece. The Holy Synod of the Orthodox Church of Greece resolved not to recognize the baptism of the Greek Old Calendarists, but receive them back from the schism only through rebaptizing.

Archbishop Abel of Lublin and Chelm, who represented the Orthodox Church of Poland at the festivities, emphasized that schism was a sin, and any sin can be healed only through repentance. The Church has its own structure, discipline and canon law, and one cannot manipulate her. There is a simple and definite canonical path in the Church.

He added: “We live under rather difficult circumstances in Poland, because we do not have many Orthodox Christians in the country. We have signed a declaration on common recognition of the sacrament of baptism with the Roman Catholic Church as there are many mixed marriages. However, this is not a great problem, as both Churches have kept the apostolic succession… Schismatics would accuse us of receiving the Catholics and of not receiving our own, but I say that one should think on a deeper level. Archbishop Abel reminded the journalists that the head of the “Kievan Patriarchate” had been anathematized and that the structure he leads had no place among the canonical Churches.

Archimandrite Serafim (Shemyatovsky) of the Orthodox Church of the Czech Lands and Slovakia said that the practice of rebaptizing those who were baptized in schism was common in other Churches. “We rebaptize even those who come to us from the Greek Catholic Church. If a priest comes, he is rebaptized and then ordained,” he added.

...
Предыдущий Следующий
Комментарии
Войдите через FaceBook ВКонтакте Яндекс Mail.Ru Google или введите свои данные:
andrij skyba10 августа 2012, 08:00
The guy look like a monkey and acts like one too. All the others are also "Monkey see, monkey do". What schismatics? We have our own country, and we have our own Church and Patriarch! Deal with it and live with it! All these donkeys who fear and walk in line to what Moscow dictates can go in a single file line to get re-baptized in the Dnipro River and stay at the bottom. We Ukrainians don't need your pro-Moscow meddling so keep to your own countries church and stay out of ours!
Rumwold Leigh 9 августа 2012, 12:00
It is not always clear who is in schism and who in canonical order - for example, if the main church in a country starts doing things which are contrary to the canons we are SUPPOSED, according to those same canons, to separate ourselves from it! The issue is correctly understanding the Orthodox Faith, a prerequisite to correctly living it, but this is the one issue no one wants to address, despite many efforts.