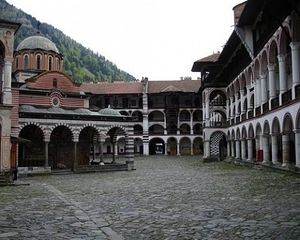 St. John of Rila was the first Bulgarian recluse. He was revered as a saint when he was still alive, and according to tradition, wild animals would come to him and birds would land on his hands.

His followers founded the Rila Monastery as well as many churches in his honor. One of these churches dedicated to St. John of Rila was consecrated in 2008 in the city of Veliko Tarnovo.

St. John of Rila is honored today as the patron of Bulgarian people and one of the most important saints of the Bulgarian Orthodox Church.

St. John died in 946 AD in the seclusion of his monastery, and was canonized right after his death. Remembered for his miracles, he is one of Bulgaria's most influential spiritual leaders.

Shortly after the saint's death, his remains, which are considered to have wonder-working powers, were transferred to Sofia during the reign of Peter I. After the Magyar King Bela III conquered Sofia in 1183, St John's remains were sent to the Hungarian capital Esztergom and remained there for 4 years before being returned to Sofia in 1187.

In 1194, the Bulgarian Tsar Ivan Asen I ordered the remains to be moved to his capital, Veliko Tarnovo. Surviving the Turkish conquest of the city in 1393, they were returned to the Rila Monastery in 1469 with the permission of Sultan Murad II.