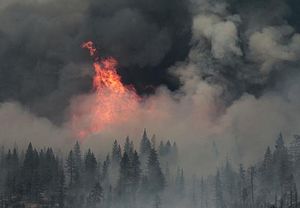 Several hundred people have answered a call by a Serbian Orthodox church bishop to pray for rain as fires rage in the Balkan country, and forecasts indicate their prayers may be answered.

The church prayers in the town of Valjevo in central Serbia were held Sunday after months of record-setting temperatures and unprecedented drought that has triggered fires, destroyed crops and dried out rivers.

Emergency measures have been introduced in parts of central Serbia as two Russian firefighting planes try to extinguish blazes that have destroyed hundreds of acres of forests and threatened some villages.

Serbia's government, which called the Russians for help and deployed army troops to fight the fires, held an emergency session Sunday to deal with the disaster.