Bell-tower of Armenian church in Turkey back after 97 years 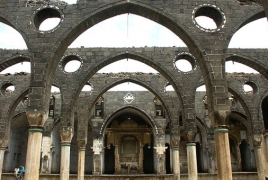 Bell-tower of Armenian church in Turkey back after 97 years
The bell-tower of Surp Giragos Armenian Church in Diyarbakır, Turkey, is set to return to use after a 97-year interval, with a new bell made in Russia, Hurriyet Daily News reported.

As part of repair and restoration work at the Surp Giragos Church a new bell was made in Moscow, and has been delivered to Diyarbakır. The bronze bell weighs 100 kilograms, and will ring from the bell-tower beginning at its reopening ceremony on November 4.

The church’s bell-tower was demolished during the years of Genocide, on the grounds that it was “higher than the minarets in the city.”

Diyarbakır’s Surp Giragos Armenian Church Foundation began restoring the church in 2010. The restoration work, which was also supported by Diyarbakır Metropolitan Municipality with one million Turkish Liras in financial aid, was completed, and the church was reopened to service, in Oct 2011. Work on other parts of the church has continued, stopping from time to time due to financial problems. A total of two million liras have been spent on the restoration and repair work so far, and the total cost will be 3.2 million liras.

The church which was built in 1376 is located in the Fatihpaşa neighborhood in Diyarbakır’s Sur district, densely populated by Armenians. The title for the land the church is built on used to belong to Armenian community, and it served as a metropolitan until 1915. Regarded by art historians as the biggest church in the Middle East, the Surp Giragos Church covers 3,200 square meters and has a capacity of 3,000 people.