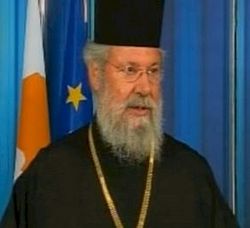 Christianity is at stake, especially in Syria, said here Monday Archbishop Chrysostomos, warning that if extremists prevail in Syria, minorities and Christians will feel the repercussions.

The Archbishop said this is something which greatly concerns the Orthodox churches of the region.

Archbishop Chrysostomos, together with the Patriarchs of Alexandria and All Africa Theodoros and Jerusalem and all Palestine Theofilos, speaking during a press conference, explained the vision, aims and expectations of the Orthodox Initiative, in the framework of the political and socio-economic changes that are developing nowadays in the wider Middle East region.

As part of the common action of the orthodox churches of the Middle East, groups with youth from the Patriarchates of Alexandria, Antioch and Jerusalem, are on the island to take part in a common programme for youth from the Church of Cyprus. The programme is being held at the camp site of the Archbishopric at Agios Nikolaos in Kakopetria. The “Orthodox Initiative”, formed earlier this year, aims at strengthening cooperation between the churches with Christians in the Middle East.

Archbishop Chrysostomos said that at the Meeting of the Primates of the Orthodox Churches held in Cyprus last March, it was also decided that a delegation will visit Brussels and Washington to discuss the issues which concern the countries in the Middle East, especially Syria and Egypt, as many Christians live in these two countries “and we are concerned about the future of these people”.

Asked if developments in the Middle East are posing a danger for Christians, Archbishop Chrysostomos replied: “certainly Christianity is in danger, especially in Syria”.

He said that the Assad government was protecting minorities and Christians, but if extremists prevail in Syria, the first who will suffer the consequences will be minorities and Christians. “We are very worried about this. We want to hold meetings with decision making centres which determine the fate of all these people and find out their stance and the protection they can provide”.

Patriarch of Alexandria Theodoros said “we have come to this blessed island of Cyprus to take courage and strength and return to our Patriarchates in the Middle East”.

Patriarch of Jerusalem Theofilos said that the presence of the patriarchates in Cyprus is an historic event for the churches of the Middle East.

“The orthodox church is united and is actively participating in developing events, showing its concern and interest for the Christian element in the Middle East and the wider Middle East region.

The three church leaders said that the number of refugees that has arrived in Jordan is around 20 thousand, adding that the church will be sending a container to Jordan with clothing, toys, blankets and other items for the refugees in Jordan.