Heaven in a Choir Loft: Reflections of Georgian-Russian Orthodox brotherhood one year after the South Ossetian war 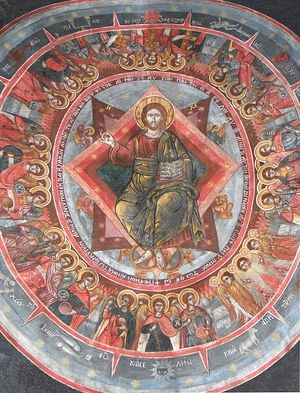 In the ongoing saga of foreign affairs involving the Republic of Georgia and the Russian Federation, one story has escaped the attention of the news media. It is the story of an Orthodox Christian parish in Toronto, Canada, where Orthodox of all ethnicities, but especially Russian and Georgian, have come together as brothers, as children in the Kingdom of God. It is a joyful unity unnoticed by the outside world, but for those with eyes to see and ears to hear, it is a foretaste of the age to come, made possible only in Christ.

For many years, Christ the Saviour Cathedral in Toronto has been known among Canadian Orthodox as a staunch defender of Russian language and traditions. The parish itself has been very welcoming to regular worshippers of Korean, Chinese, Romanian, and Mediterranean backgrounds, yet the prevailing spirit and ethos of the parish have remained firmly Russian. However, early in 2008, a number of choir members asked to expand the choir's repertoire to include Georgian Orthodox hymns. Within weeks, the choir tentatively grasped the rudiments of Georgian chant, an ancient tradition of polyphony from the Caucasus mountains believed to be the earliest form of polyphony in the world.

In the world at large, in August 2008, armed hostilities between Georgia and Russia broke out over the territories of South Ossetia (Samachablo) and Abkhazia (Abkhazeti). Media "experts" offered the same tired, tendentious opinions on the complex history of Georgian and Russian relations. In North America, Europe and Russia, variously polarized versions of the crisis were promoted to stoke the passions of their target audiences. Among the heightened rhetoric on both sides of the political fence, Archpriest Oleg Kirilov (rector of Christ the Saviour Cathedral) courageously stood up and preached about the spiritual brotherhood that transcended the Orthodox Georgian and Russian peoples, and of all peoples who share the Orthodox Christian faith. On local Russian television and in newspapers, Fr. Oleg spoke of the necessity to oppose the devilish tactics of nationalistic division, and to embrace the true unity that exists among believers of the one Holy Catholic and Apostolic Church - the Orthodox Church. In the meantime, the choir continued to improve its repertoire of Georgian hymns as a sign of this Christian brotherhood, despite the apparent tension of Georgian-Russian relations after the South Ossetian war.

Fr. Oleg's truly Christian message of Orthodox brotherhood subsequently bore fruit in September 2008, one month after the South Ossetian war. One Sunday towards the end of the Divine Liturgy, a group of newly-arrived Georgians approached the parish's choir mistress. Having witnessed the choir's goodwill in singing ancient Georgian chant, they offered to sing a few hymns in order to show "how it is done back home". The parishioners were riveted to the floor during the performance of the haunting, other-worldly psalmody which, when concluded, left them momentarily stunned, then quickly erupting in a thunder of applause. (thus eliciting a stern reprimand to the congregation from Fr. Oleg: "Clapping hands is not appropriate behaviour in the House of God!").

Since that day, the stream of faithful Georgian Orthodox flowing to Christ the Saviour Cathedral has grown, and the choir has been a focal point of brotherhood among the newly-arrived Georgians and the established Russians. The piety of the Georgians has elevated the spirit of the parish and has caused many to re-focus on the essential bond of love for which true Christians, ancient and modern, have always been known. Fr. Oleg continues to commemorate the Patriarchs of Georgia and Russia (in the Georgian and Slavonic languages, respectively), as well as praying specifically for the armed forces of Canada and Russia, at which all parishioners fervently cross themselves - the Georgians most of all! Whether the Georgians are praying for the success of the Russian armed forces (not likely) or that God may enlighten and have mercy on their "adversaries", this act of praying for one's "enemies" - and to do so with the love and fervency shown every week at the Divine Liturgy - this is the Orthodox Christian way. There is no greater catechism than seeing the entire parish praying with one mind and one heart for God's mercy - by all and for all.

Not everything has gone smoothly, however, and in the beginning there were a few bumps along the way. One Sunday, the Georgians in the choir loft unexpectedly started stumbling around in a panic, chaos quickly spreading among the ranks. One Georgian member began to pull out his hair in anguish. In this atmosphere of sudden turmoil, one of the older Georgians grabbed one of the Russians and pleaded in desperation to know why the parishioners were kneeling on a Sunday, at the consecration of the Holy Gifts! As penitential kneeling on Sundays is prohibited by the Canons, but is a local practice of reverential piety, the Georgians were up in arms. Praying for God's mercy to be upon the Russian armed forces during the Commemorations at Liturgy is perfectly fine, but woe if you dare kneel on a Sunday!

At the feast of Pascha just past (2009), Fr. Oleg made it a point to read the Holy Gospel in as many languages as possible, including Georgian. Based on the evident joy and smiles by all Orthodox Georgians in attendance, while simultaneously shaking and holding their heads in their hands, two things were evident: 1) Fr. Oleg's pronunciation in Georgian could use a little more practice, and 2) they knew that they are loved and appreciated by their Russian brethren in faith, as they have loved and appreciated their new parish home in Toronto.

As the celebrations after the Paschal Celebration continued long into the night - the sounds of Georgian and Russian festal hymns mingling with the joy of the communal Paschal breakfast - it was a taste of Paradise. It was the Prophet Isaiah's vision of the age to come, where "the wolf will recline with the lamb, and they will do no hurt in all of God's Holy Mountain, and both will feast together in the Kingdom of Heaven".