As the Russian Orthodox Church continues its ascent as a political force, Archimandrite Tikhon Shevkunov stands at the center of a swirling argument about the church’s power and its possible influence on President Vladimir V. Putin. 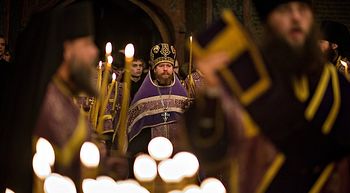 Archimandrite Tikhon Shevkunov is head of the Sretensky Monastery in Moscow and the author of a best seller on monastic life.
Father Tikhon, a former film student, presides over the 14th century Sretensky Monastery here, near the headquarters of the former KGB, for which Mr. Putin worked in Soviet times. A media-savvy figure, Father Tikhon has written a surprise best seller about monastic life and has been described as “Putin’s spiritual father” — a label he coyly neither embraces nor denies.

“It would be cruel of me to answer this question, to say yes or no and take away the bread of journalists,” he said recently in an interview in his receiving room, adorned with portraits of a saint and a czar. “Although, of course, one doesn’t answer such a question about anyone,” he added.

This week, Father Tikhon was in the news again after reports, swiftly denied, that the police had shut down a brothel on the grounds of his monastery. He branded the story “unconscionable slander” and “a vivid example of the information war against the church.” The truth, he told the news agency RIA Novosti, was that a brothel had been operating in a building next to cloister grounds, and that his monastery had demanded it be shut.

Father Tikhon, 54, took over at the white-walled monastery, one of Russia’s oldest, in 1995. He has since transformed the structure, which served as a killing ground in Stalin’s times, into a cinematically perfect vision of Orthodoxy.

A few days later, on an idyllic fall evening, his black monastic robes billowed in the wind as choral music wafted through the air and a crush of bescarved women lunged for his blessing.

Some critics belittle Father Tikhon as a publicity hound. But others, who see him as a rising power broker, call him a promoter of a rigid Orthodox fundamentalism. That is a charge he dismissed as “nonsense.”

The old debate over the role of the Orthodox Church and its relationship to the state broke into the open most recently over the conviction of members of the punk band Pussy Riot for staging an anti-Putin stunt at Moscow’s biggest cathedral. The performance, which was captured on a video that circulated widely on the Internet, mocked both Mr. Putin and Patriarch Kirill I, the head of the Orthodox Church.

In this atmosphere, Father Tikhon’s ties to Mr. Putin have come under scrutiny. He had already attracted attention in 2008, for writing and narrating a television documentary that depicted the fall of Byzantium as a parable about the threats to modern Russia. The film was derided by liberals as pandering to Mr. Putin’s worldview of a virtuous Russia under threat from foreign forces.

Now as the author of “Unsaintly Saints and Other Stories,” a book about monastic life and the path to faith, Father Tikhon and his Kremlin connection are even more prominent. The book focuses on another famous monastery that Mr. Putin visited shortly after becoming president in 2000.

One unanswered question is whether Father Tikhon is, in fact, Mr. Putin’s spiritual father — in Russian Orthodox tradition, a figure who is a father confessor and guide to salvation.

“I know Archimandrite Tikhon personally, and he told me directly that he is not Putin’s spiritual father,” Father Georgy Mitrofanov, a prominent St. Petersburg priest, said publicly in September. “I think that our president’s main spiritual father is he himself.”

When pressed on the question, Father Tikhon changed the subject to the Chinese winter watermelon grown on the farm run by his monastery.

For all the reticence, Father Tikhon is an unabashed supporter of Mr. Putin, saying he saved Russia from “vulgar liberals” who nearly destroyed it in the 1990s. During the interview, he checked the time to make sure he would not be late to a Kremlin meeting of Mr. Putin’s culture commission.

At the meeting, according to the Kremlin Web site, Mr. Putin chided the monk, who is a member of the commission, for comparing today’s young Russian women to “a drunk girl standing by the bus stop.”

“Father, you have gone too far,” Mr. Putin reportedly said.

To mark the fifth anniversary of that reunification and to promote an English translation of his book, titled “Everyday Saints,” Father Tikhon toured the United States in October with the Sretensky Monastery Choir.

His book runs 640 pages and has sold over 1.1 million copies in Russian. Millions more have been downloaded electronically, Father Tikhon said. OLMA Media Group, which published the book in 2011, announced in August that it was the country’s biggest best seller since the Soviet era. The profits are going back into the Sretensky Monastery, Father Tikhon said, to build a cathedral honoring those killed there for their religious faith in Soviet times.

The book is a portrait of one of the Orthodox Church’s holiest sites, the Pskovo-Pechersky Monastery in northwestern Russia. The monastery stayed open during the Soviet era, surviving first within independent Estonia, then by the wiliness and fortitude of the monks after the territory was absorbed into the Soviet Union.

Georgy Shevkunov, as Father Tikhon was known before taking his vows, became a novice there shortly after his baptism in 1982, a sharp turn from studies at the Soviet Union’s most prestigious film school. At the monastery, he writes, “a new world had suddenly opened up, incomparable in its beauty.”

Mr. Putin visited the monastery in August 2000. Russian church Web sites say that he spent over an hour in private conversation with Archimandrite Ioann Krestyankin, a revered monk who died in 2006 and who served as spiritual guide to Father Tikhon.

In the monastery’s guest book, Mr. Putin wrote: “The revival of Russia and growth of its might are unthinkable without the strengthening of society’s moral foundations. The role and significance of the Russian Orthodox Church are huge. May God protect you.”