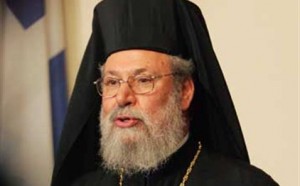 In a ceremony organized by the Cyprus Embassy in Austria and held in Vienna, Archbishop of Cyprus Chrysostomos called for the termination of what he said was the destruction of the Cypriot cultural heritage by Turkish occupation forces.

The event was held in collaboration with Holy Archbishopric of Cyprus and Cyprus-Austria Friendship Association, on the occasion of the Cyprus EU Presidency.

Archbishop Chrysostomos said that Turkey must withdraw its troops. He said that there is a need to verify the fate of missing persons in Cyprus and restoration of human rights throughout Cyprus, for all the legal and local residents.

The ceremony included traditional dances performance, music played by the Holy Archbishopric of Cyprus music band, a dance group of Aradipos Municipality as well as a photo exhibition in regard to the culture, art and nature of Cyprus. The event was followed by traditional Cypriot cuisine dinner offered by Ambassador of the Republic of Cyprus.